Podium Cafe Exclusive!! I have secret, insider information that HTC-Highroad, whose future has been hanging by a thread for months, may or may not make an announcement soon regarding the matter! Yes, count on it. A shoe will drop. Just don't ask me which one, or when. 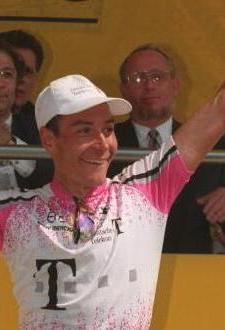 Over at VN, owner Bob Stapleton was expressing "reason for optimism," which sounds like code for good news, but until it happens it hasn't happened. This much we know: as soon as there is good news, it'll be broadcast loudly, to head off the contract feeding frenzy that may already be going on. Tejay to BMC? Goss to Green Edge? Cav to Sky? We'll see. They talk a lot, those... rumor people.

&One thought that popped into my mind today was, should the worst happen, there would be one rather intriguing free agent: Erik Zabel. Ete is given some or a lot of credit for Cavendish's development into the crafty, efficient sprinter you saw earlier today acing the rather chaotic finale of stage 15. Tyler Farrar, meanwhile, flashed greater speed but poorer positioning, and got second for his troubles. Could a little coaching from Der Meister make the difference? Mind you, I mean no disrespect to the fine lineup of coaches already on staff, or Farrar's native intelligence and experience. But we're talking about Erik Frickin Zabel. And the value of Farrar taking second on a stage versus winning it is probably enough to cover the salary in short order.

Just a thought. A more likely outcome is that Cav leaves, HTC continue on, Goss re-signs and wins 25 races in 2012.