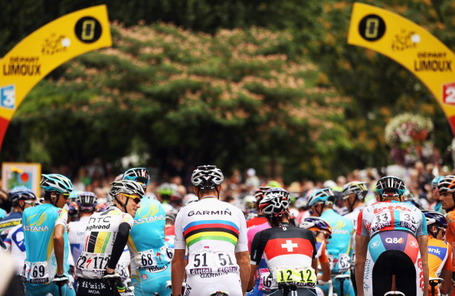 The Tour de France resumes after the second rest day with this 162.5 kilometer stage between Saint-Paul-Trois-Châteaux and Gap. In its final week, the Tour rolls inexorably toward its grand finale with the two mountaintop finishes on the col du Galibier and the Alpe d’Huez and the time trial in Grenoble.

Tuesday’s stage is a classic transition stage that brings the Tour into the shadow of the Alps. The Tour has visited Gap on twenty previous occasions. The storied Alpe d’Huez sits just up the road to the north.

Though there is only one categorized climb on the profile, the stage runs steadily uphill from the start. It’s the sort of uphill false flat grinding that saps the legs. After running mostly uphill for 130 kilometers, the road drops steeply into Gap. In a cruel tease, the riders pass through the finish at 23 kilometers to go.

The run-in to Gap is fast and technical. Watch for BMC Racing to take control of the main field here, much as they have whenever the road has turned tricky in this Tour de France. All the same, the col de Manse should not cause the general classification riders too much difficulty. If Samuel Sánchez is feeling cheeky, he could snatch some time on the descent to the finish. A determined sprinter could chase back on during the descent to the finish, but it’s no easy task. Somewhere, Philippe Gilbert is smiling.

The breakaway’s chances look good for Tuesday’s stage. The false flat climbing will make the chase difficult and with the climb so close to the finish, the sprinters’ teams may hesitate to commit to the pursuit. Riders like Sandy Casar and Sylvain Chavanel will like this course with its late climb and technical descent. Expect a fast and furious first hour as the many teams who have not yet enjoyed the podium kisses fight for a spot in the early escape.

For the general classification riders, Tuesday is a stage to stay out of trouble. Though it is not a day to play for the Yellow Jersey, this stage is no rest day for the race favorites. The teams will have some work to do to keep their captains out of trouble on the tricky roads into Gap. Riders like Cadel Evans, Andy and Fränk Schleck, Ivan Basso, and Alberto Contador will have to ride at the front, which means a hard day for their teams. Wednesday’s stage from Gap to Pinerolo poses similar challenges. But that, my friends, is a story for another day.