I'm out in Germany for the Thüringen Rundfahrt, a seven-stage race in central Germany. I previewed the race, but it's completely different, writing about it as a Daylight Deprived Internet Forum Person, and actually being here.

As stage races go, I'm told this one is pretty luxurious - not quite the Tour of Qatar, but the teams are all together in one hotel for the whole week - and a really good one at that - so it's more of a homey atmosphere. There are three car parks in the hotel, and each one is full of the race vehicles. In the early morning, even before the race has begun, the air outside is full of the sounds of pressure-washers, as the mechanics sort out the bikes for the day's race.

There's only wireless internet available in the lobby and the stairwells, so on every landing there are clusters of bike riders sat with their legs out, cursing the internet - with 90 riders, and all the team staff, the connection gets overloaded - so you can tell how keen people are by when they're on. Being late for dinner, or getting up early gives more of a chance of a speedy connection, if you don't have cheap internet on a phone. As anyone gets out of the lift, or comes up a flight of stairs, their first question is always "Have you been able to get online?" So the race updates might be a little bit patchy

Results and photos below the jump...

It's a strange thing, for me as a fangirl, to be passing all these riders I've seen on the race coverage - there's that "she looks just like she does in her photos" thing, and having to restrain the urge to say hi. But it's fantastic, and I'm very grateful to Horizon Fitness for bringing me! 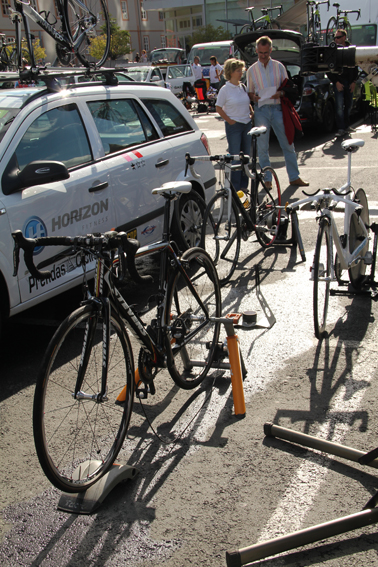 The Team Time Trial didn't start until 5pm, so there was a lot of relaxing today. You can see straight away how important it is for teams to get on - and it's a funny environment, everyone can see what everyone else is doing. Well, to a point.... there are all kinds of hierarchies, about which teams get to sleep on the same floor and eat in which dining room - so the top teams will be able to see each other, but not the next layer down so much.

It's different actually at the races. In this part of Germany, the towns all seem to have a Markt, a big market square, and it's here the travelling circus of the race bases itself - and it's first-come, first-served on who parks where. I was grinning at the different ways teams marked their territory, waiting for their vehicles to turn up - for some, it's branded tape and posts - then there were teams like Australia, marking with traffic cones, and Garmin-Cervélo, who had marked the corner of their space with their DS, Theo Maucher, sitting in a fold-up chair - well, there's no way a van driver can claim they didn't see him!

The day started with a team managers' meeting in the Rathaus - a beautiful old building, with high ceilings and echoing floors. It's in German and English, and covered last-minute details and requests from the race organisers, and the UCI official team introducing themselves and reminding everyone of the rules - on doping control, saddle alignment, a 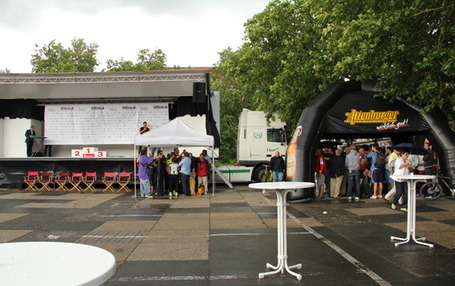 It had been a beautiful sunny day, but by the time of the team presentations, huge steely clouds were layered up overhead. It was a nice big crowd out to see the race, but half-way through there was a deluge, and everyone ran for the tents and the stalls. It was huge comedy - every time a team came onstage, the crowd of photographers would dash out of the nearest shelter for prime photographic spot, and then back to try to get the middle, driest part of the shelter. 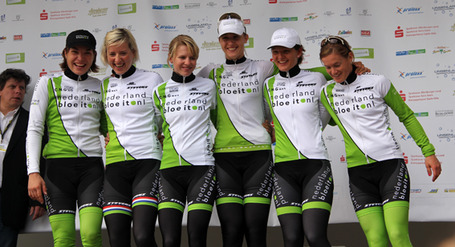 The actual course was interesting - and yes, very different to what it looked like on the (excellent) profile. It's in Jena, and started with a run-up, then 2 laps around a block that had the world's oldest planetarium, part of the university, and a set of glasshouses on it. The lap began with a descent, turned a corner, then wound round one of those hills that feels like it never ends, and has an extra kick at the top - you know, the kind when you're wondering how on earth there was just a small descent for all that hill! Two laps, then a sharp right turn back to the finishing straight on the other side of the start. With it just being a 1.5km lap, I hung around the start/finish - for some action, and for "backstage" shots.

Team Australia were the first ones off, and scored a great time of 4.47. Because only the first four riders counted for time, it was a fun way of spotting which had GC hopes, and which were working like crazy on the first lap, and then riding home slowly. 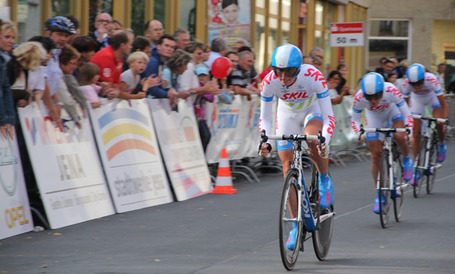 Skil Koga were an early team out, and stayed in the lead for a long time with 4:45. 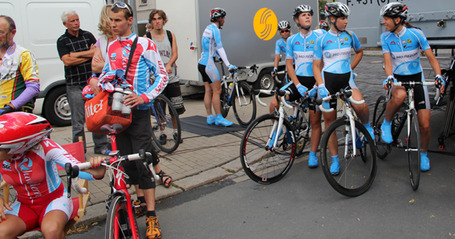 Hanging around Horizon Fitness-Prendas Ciclismo with Hanka Kupfernagel was a lot of fun. Kupfernagel was born and grew up in Thüringia, she's a former race winner and has ridden it many times. She was definitely a crowd favourite - everywhere she went, she was stopping to let people take her photo, and chatting with people who knew her - it''s one of the lovely things about the race, how close poeple get, and how friendly the crowds are. 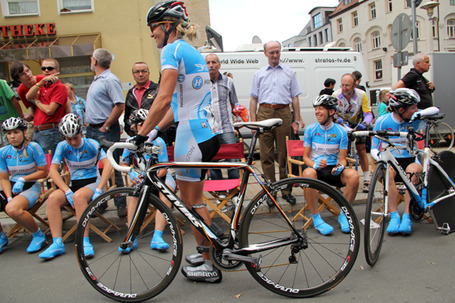 For safety reasons, only one team was allowed on the course at a time, so there was plenty of sitting around - waiting - with the UCI jury checking out the bikes were to the correct standard - and lots of time for race organisers to chat with the riders. They were particularly interested in Sarah Storey's bike. Storey is the para-cycling World and Olympic champion, and her bike is set up so all the brakes and gears are on the right-hand side, as she can't do any of that with her left hand. 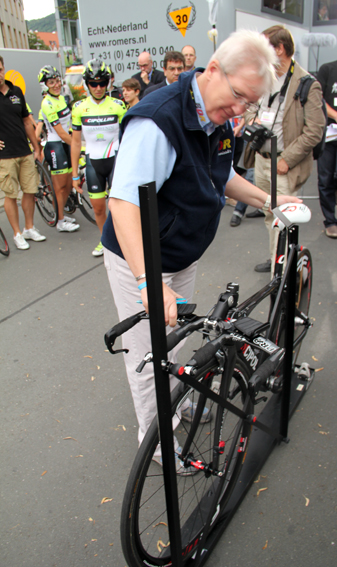 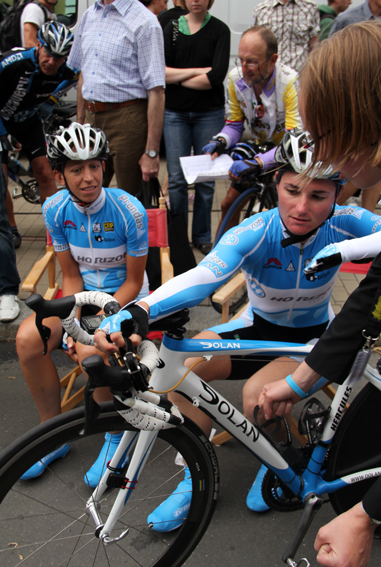 The results had stayed very close - just seconds apart at the top, given how short the course was - and Australia, Horizon and Germany had the same time at 4:47. But when the last six teams started, the placings started to change...

With 2 ITT Champions and the World Champ, Garmin-Cervélo had to be a favourite. They burnt up the course in 4:41, easily taking the lead. 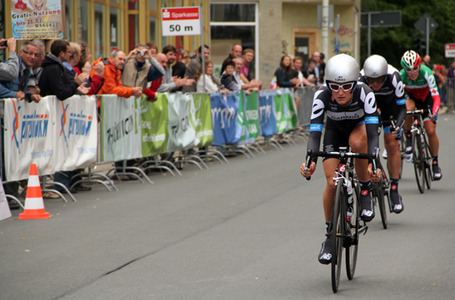 But then there was HTC-Highroad.... Sadly I had to go just as they were arriving in the waiting area, so I couldn't see them ride (other people's dinner will always trump fangirl!) but soon the texts came in - 04:34, beating everyone. There was only 1 more team to go - Russia, the team of last year's winner, Olga Zabelinskaya, but they couldn't beat the glory that is the HTC TTT team... 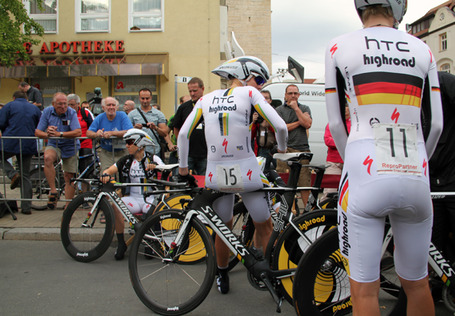 There were questions over some of the results, so these might change - but you can find them all on the official website.

Something must have happened to Olga Zabelinskaya, as she 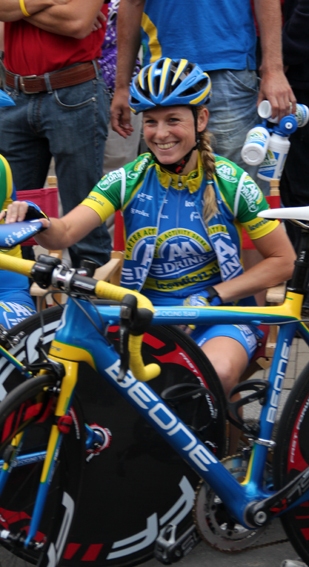 ended 1:06 down - mechanical, maybe? It seriously dents her GC hopes, but at least it frees her up for attacks... and we do like attacks...

So some gaps on the GC already - but tomorrow the hilly racing starts. There are bonifications at the "sprint" points (points points sounds so wrong, doesn't it?) and on the finish - will HTC extend their lead, or will they be caught? Anything can happen!

I'll leave you with a picture of happiest cyclist at the start, AA Drinks' Daphny van den Brand...