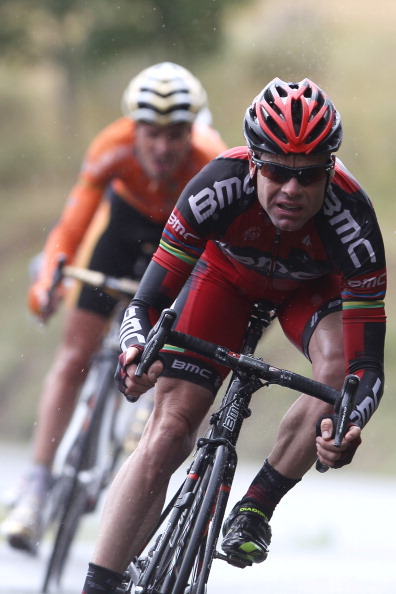 The Tour de France pays a visit to Italy during this up and down stage 17 from Gap to Pinerolo. It's a hilly affair, as the Tour crosses the western Alps into Piedmont. Five categorized climbs enliven the proceedings, and the final climb of the day summits with eight kilometers left to race.

That's a pretty perfect launch pad for a stage-winning attack, right there. It's also an opportunity for a good descender to make a dash for time in the overall classification. Certainly, Cadel Evans showed to perfection how to play that game on the road to Gap on Tuesday.

The stage rolls out over mostly flat terrain for around 70 kilometers. Then, it's a series of four climbs all lined up in a nice row. The col de Montegenèvre and the climb to Sestrières are the most difficult at 7.9 and 11.1 kilometers respectively. The average gradients are in the 6% range.

These are not the monsters of the high mountains, the Giants like the col du Galibier and the Alpe d'Huez still to come in this Tour de France. But the climbs on this stage should rule out the chances of the sprinters and if one of the bigs is on a bad day, he will not be smiling.

From the summit of Sestrière, it's a long gradual descent to Villar Perosa. We're in Italy now, by the way. The Tour de France crosses the border just after the summit of the col de Montegenèvre. The stage runs downhill for almost 50 kilometers before the final climb of the day begins outside Villar Perossa.

The final climb of the day, the Côte de Pramartino (Colle Pra Martino, to the locals), climbs 6.7 kilometers at an average gradient of 6%. It stairsteps, so that average gradient is not especially helpful. This climb is very Italian. The steepest sections hit 16%. That'll leave a mark. This is Contador country, and certainly there will be attacking. From the summit of the Pramartino, it's 8 kilometers of stupid steep descending to the finish. Boom! There you are. Andy Schleck probably won't like this stage finish very much.

Like Tuesday's stage, this stage to Pinerolo looks made for the breakaway riders to go all the way. Was Sylvain Chavanel out the back on the final climb on Tuesday because he was tired? Or, was the French National Champion saving his legs for a big day out on Wednesday? Certainly, Wednesday's stage will suit a rider like Chavanel who can force a selection on the final climb and rail the descent into Pinerolo. The French teams are still looking for their first stage win in this year's Tour, though Thomas Voeckler's spirited defense of the Maillot Jaune has given France much to celebrate. Expect to see a big breakaway with some serious power go up the road early on Wednesday.

Will the bigs ride for it like they did on the road to Gap? With two mountain top finishes and the time trial still to come, they might choose to sit. But Alberto Contador trails Cadel Evans by 1:57, Fränk Schleck by 1:53, and Andy Schleck by :39. Both Schlecks have shown their vulnerable on the fast, tricky descents. It's hard to imagine Alberto Contador won't take advantage of their weakness. That final climb looks made to order for a big move.

And still, Thomas Voeckler sits in the lead, in a thoroughly surprising twist in this year's Tour story. Voeckler holds 1:45 over Cadel Evans, who maybe more than any of the other favorites is not taking Voeckler for granted. The French rider has said he will crack in the Alps, but the smart rider won't listen to the talk. The Tour de France is won on the road, not in the post-race interviews. Contador needs 3:42 to bring back Voeckler. That time gap could melt away like the snow under a summer sun in the high mountains. But the time, it grows short.