The Greatest Race Of Its Time

Share All sharing options for: The Greatest Race Of Its Time 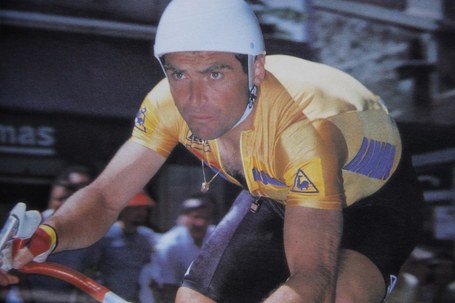 This year the Tour de France pays an occasional tip of the cap to the 1986 edition, now celebrating its 25th anniversary. Today, for example, marks the 25th anniversary to the day of the 1986 Tour's arrival in Gap. On that day, Jean-Francois Bernard, the young protege of the La Vie Claire machine, soloed home to his first truly major victory, sending the already high expectations into the stratosphere. A little ways behind came a group of chasers, mostly French and Belgian, followed by the peloton led home by the maillot vert, Eric Vanderaerden. Another coincidence, then too a Frenchman carried the maillot jaune into Gap. Bernard Hinault maintained a 34" lead over American Greg LeMond, every bit as tenuously as Thomas Voeckler does today.

From here the anniversary celebrations will be a bit more subtle, with only the Alpe d'Huez stage on Friday to ring in the echos. That stage from '86 is best remembered for LeMond, by then in yellow, crossing the line just behind Hinault out of deference, detente, and self-protection. [Richard Moore's Slaying the Badger, which you can read about here and win a copy of here, makes mention of the threats made against LeMond by people who couldn't accept a winner from outside the heart of cycling, particularly a win which denied the Badger a record sixth title.] The hostilities wouldn't end until the penultimate stage, finishing atop the Puy de Dome. Or maybe not til the post-race party in Paris. Or maybe they still haven't.

A massive digression, on the flip...

There is a great sequence in the Moore book where he talks about trying to get Hinault to admit that he attacked LeMond for his own gain. The issue is whether Hinault defended the honor of the Tour by attacking and enlivening a pretty dull race, or whether he attacked his teammate. Was he a patron? Can you violate the one iron-clad rule of the sport, respecting your team's leader, in an honorable fashion?

Hinault has gone 25 years without copping to that bad behavior -- insisting he animated the race and destabilized La Vie Claire's opponents instead -- and he wasn't going to give it to an English writer, however cleverly he was asked. But you know what? I think he wants to say it. He eats breakfast yards from Guimard's troops trained to beat him. No one tells him how to win a race. Least of all foreigners.

But we need the right person to get it out of him. We need Hinault on the stand...

Defence calls Bernard Hinault. Raise your right hand, please. Will you tell the truth, the whole truth, and nothing but the truth?

Have a seat please, sir. State your name, rank and title.

When you learned of Mr. LeMond's concerns you had a meeting with your helpers, DS and owner, correct?

I told him to tell his men not to attack LeMond.

Did you give Koechli an order?

I ordered him to have LeMond attack me immediately.

Is there another kind?

These are the records for July 19th. And these are the letters LeMond wrote in nine months, begging for support. But when he finally got it, how many people did he call? Zero! Nobody. Not one call to his wife or Hampsten, saying he was free to attack. Can you explain that? There was no attack order, was there?

Objection! Counsel is trying to smear a patron, hoping to suggest impropriety and win points. I recommend that he be reprimanded, and the witness be excused.

Overruled. The objection is noted.

Mr. Hinault? Is this funny, sir?

Do you have an answer?

Absolutely. I don't have a clue. Maybe he didn't have any friends. I'm an educated man, but I don't know the strategic habits of LeMond. What I do know is that he was set to attack at the first col. Are these really the questions I was called here to answer? I hope you have something more.

You said, you told Koechli to say that LeMond wasn't to be touched. He was clear on what you wanted?

Can he have ignored the order? Or forgot it? Could he have thought, "The old man is wrong"?

Ever been in the Tour, son? Ever served in a mountain attack? Ever put your life in another man's hands, and his in yours? We follow orders, son. Otherwise people lose. It's that simple. Are we clear? ARE WE CLEAR?

Crystal. One last question, before I call Steve Bauer and Charly Berard. If you ordered that LeMond was to be protected and allowed to attack, and your orders are always followed, then why was LeMond's Tour in danger? Why would it be necessary to shield him?

He was a substandard strategic rider.

You said he was being protected because his Tour was in danger. I said, "grave danger?" and you said... we can read it...

I know what I said!

Then why the two orders?

Men can do things on their own.

But your men never did. Your men obey orders. So LeMond was free to attack, right?

If Koechli gave an order that LeMond was to be allowed to attack, why did he have to be sheltered? Koechli ordered a Code Red, because you told him to! And when it went bad, you wrote a phoney biography and fixed the L'Equipe story! You coerced Tapie! Mr. Hinault, did you order the Code Red?

You don't have to answer that.

I WANT THE TRUTH!

YOU CAN'T HANDLE THE TRUTH!! Son, we live in a world with roads that must be guarded. Who's gonna do it? You? You, Gavia? I have more responsibility than you can fathom. You weep for LeMond and curse the peloton. You don't know what I know. My attacks won LeMond the Tour. And my existence, while grotesque to you, wins the Tour! But deep down, in places you don't talk about at parties, - - you need me as the patron. We use words like honour, code, loyalty. They're the backbone of our lives. You use them as a punchline! I haven't the time or inclination to explain myself - - to a man who needs my protection - - but questions the way I do it. Better just to thank me. Or pick up a bike and see if you can hold my wheel. But I don't give a damn WHAT you think you are entitled to!

DID YOU ATTACK LEMOND?

YOU'RE GODDAMNED RIGHT I DID!!

Honestly, if you think Hinault will ever apologize for trying to win the 1986 Tour, you don't know him too well. Happy anniversary!