Thüringen Rundfahrt Stage 1: A suicide breakaway from the team car

Share All sharing options for: Thüringen Rundfahrt Stage 1: A suicide breakaway from the team car

Yesterday's Team Time Trial was a great event, kicking off the fight for the Thüringen Rundfahrt GC, but today the road racing started. I grabbed a lift in the front seat of the Horizon Fitness-Prendas Ciclismo team car, and it turned out to be exactly the right place to be.... Race report - and now photos! below the jump

The race started at 2:30, and with the start and finish in Gera only half an hour's drive away from the hotel, there was plenty of time for the mechanics and soigneurs to work. There's a real range of how many staff there are for each team - so some teams have an army of people, others just 1. It's so interesting just walking around watching what they do. I'm the least techy person you can imagine - but any questions you want me to ask, leave them in the comments and I'll do my best! 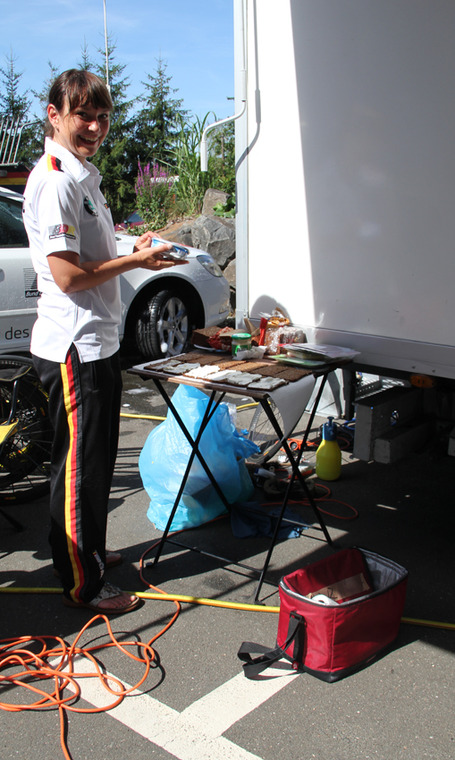 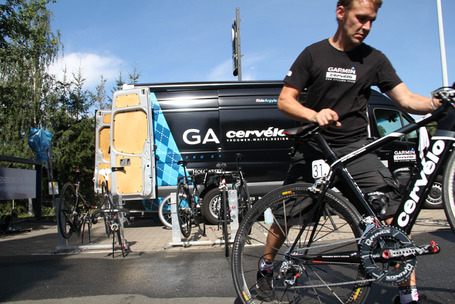 After an early lunch at 11:45, we set off for the race. It was another beautiful cobbled square, and once again, despite threatening grey clouds, another sunny day - windy, so not too hot, rain holding off. The stage was 120km around Gera, rolling hills through farmland and woodlands, passing all kinds of picturesque towns and villages, before coming back for a lap of the town with the 1 mountains points on the sharp hill, and ending in an uphill, cobbled sprint after some technical twists and turns on the way through the town. 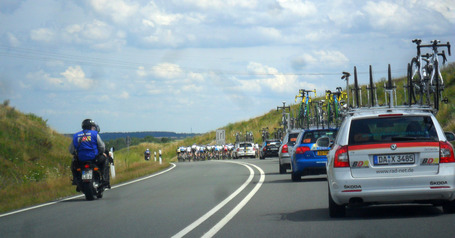 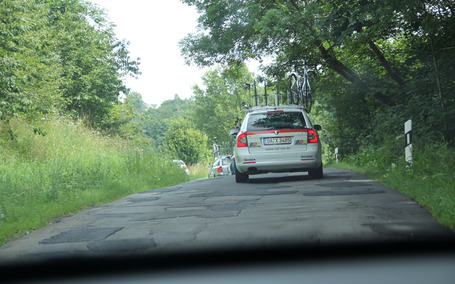 were car number 8, after yesterday's TTT, but were slightly scuppered by the lack of race radio. There's no rider radio, so we relied on the race radio to give us any information - but for a whole load of teams, it just wasn't working. There's almost no point being there if you don't know what's going on - and with a couple of crashes, the mechanics all leapt out of the cars and ran up the road to check their riders weren't hurt, carrying wheels just in case. On a twisty course, we had to keep our eyes open to see our riders put up their hands for more water - and it was only when we passed someone by the side of the road who shouted "Helen! Two minutes!" that we realised Helen Wyman had gone on the attack.

In the car on the way home, Helen told me "I've never had a problem finding the perfect time to attack - but I've had a problem waiting for it!" The r 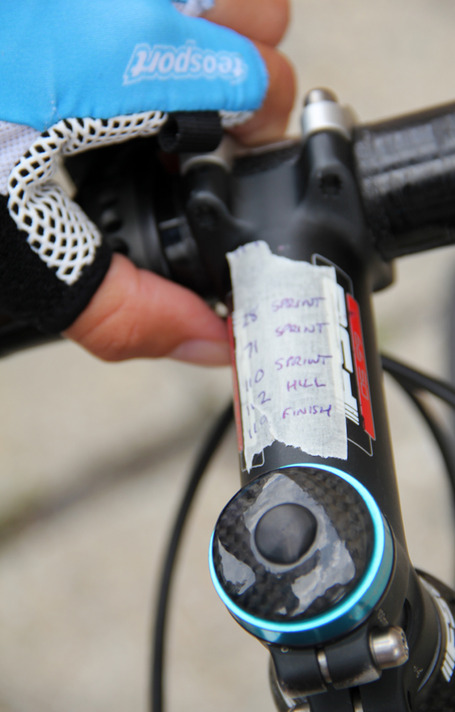 ace had started with a 4km neutral zone, and had been an odd mix of aggressive and slow - lots of attempts, groups of up to 10 riders getting maybe a few metres up the road - more splits than breaks, but were wheeled in. Skil Koga had been active on the front - and AA Drink-Leontien's Kirsten Wild had made some particularly impressive attacks before the first intermediate sprint point, and a team-mate had tried, but nothing could stick. There had been a crash before the first feedzone, that took Aurore Verhoeven out of the race, and after the feed point, it stayed quiet.... so quiet that a couple of km later, at around km 50, Helen decided to give it a go.

She told us later that she'd been surprised that no one came with her - but, as she says, "I love a good suicide attack!", so carried on alone. She was first through the second intermediate sprint point, at 71.5km, so once we realised she was off, and had made our way through the peloton to catch her, she was 2:25 ahead.

We got into a little bit of trouble, as Stef [Wyman, the Horizon DS] had ridden straight past the front jury car to give Helen water, gels and encouragement - she'd been out for about 30 km without anything but what she was carrying. When Stef heard she'd lead through the first sprint point, her goal was clear - to get to the final sprint point first, and take the Sprint jersey. At this point the roads were wider and straighter (at some points the peloton was as wide as it was long!) and the big sprint teams could get her back before the end - but she might stay away for the jersey. 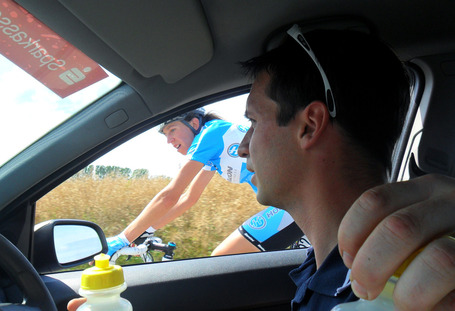 It's a strange thing, being at the front feels a LOT slower than in the caravan behind the peloton. With the safety of cyclists who've dropped off the back as the absolute priority, there's a lot of stopping and starting - and rally driving skills needed to catch up. Cars beep at each other to ensure everyone's aware of the riders, and any car called forward for mechanica 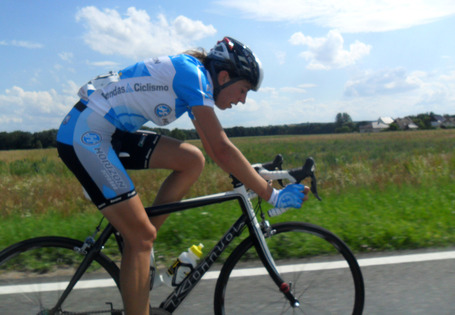 ls, crashes or food needs obviously has priority. It can be a bit crazy, chasing back on - how the men's DSs do it while watching tv and shouting down radios is beyond me. But at the front, it's calmer - there's the rider, the jury car in front, the neutral car behind, and just the occasional jury or tv motorbike coming up and down. You have to get permission to go forward to the rider - whether for food or to give them progress updates. It feels so slow - and so tense! Each km dragged - but we got to see all the cheering groups by the side of the road - cheerleaders, people in a treehouse, a whole load of kids in towels who were dripping from jumping out of a pool. Barney Storey, current Paralympic and former World Champion as tandem pilot, is the Horizon mechanic, and was handing team postcards out of the window to the spectators, making us laugh. 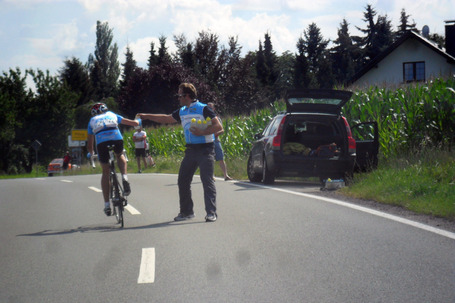 Our radio had kicked in after Stef had told the jury car, so we were able to hear the situation. Helen's gap had risen to 2:50, and there were still calls for water and food from team cars... but then the news we were waiting for - Adrie Visser and Chloe Hosking of HTC were on the front, leading the chase. The final sprint point was 9.6km from the end, and at 20km to go, we could see the peloton strung out behind us on the long, clear roads. The gap fell to around a minute, and then stuck - but then, worse news from the radio - all 6 HTC riders were on the front. This was serious business, and the gap started to tumble. Helen clocked over 70kph on the descent - and then as we arrived in Gera, we were told to pull in and return to the caravan, so we couldn't see what was happening. Nail-biting! At 1km to go, the gap was just 10 seconds!

We turned into the narrow cobbled rise to the finish line, huge crowds lining the roads, holding our breath. Then the radio - in German and then English - Helen had been caught.... just a few metres after the sprint line! She'd won the sprint jersey! Her day was over, and helped by her team-mate Sarah Storey, she made it over the top of the climb, and cruised home, job done.

With the break caught, it was game on for the sprint teams. Almost immediately after Svetlana Boubnenkova (Russia) won the mountains points, a group attacked - Boubnenkova & Olga Zabelinskaya (Russia), Amber Neben (HTC), Lizzie Armitstead Emma Pooley (Garmin-Cervélo), Linda Villumsen (AA Drink), Fabiana Luperini (MCipollini), Claudia Haüsler (Germany), Ruth Corset & Vicki Whitelaw(Australia) and another rider - a seriously strong group, full of talent. Would the first sprinty stage go to a break after all? Once more we were on the edge of our seats, but then the radio called it - HTC's Ina-Yoko Teutenberg had won the sprint, beating Monia Baccaille (MCipollini) and Lizzie Armitstead, and making it look easy. 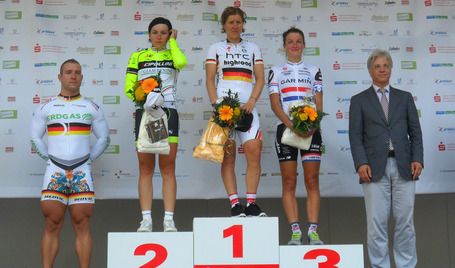 With Helen in the sprint and the "most aggressive" jersey, we stayed for the podium - I was thinking of Monty and tedvdw as German track sprint star Robert Förstermann came on stage to act as podium boy (last year we were trying to identify him just by his thighs. Helen had some great prizes - a keg of beer for Aggressive and a wrapped up box of for sprinter. Teutenberg, Bacaille and Armitstead had big glasses of beer - having the race sponsored by the Altenburger brewery has advantages!