Tour de France Stage 1 Results - Gilbert punks them. And is that Cuddles??

Share All sharing options for: Tour de France Stage 1 Results - Gilbert punks them. And is that Cuddles?? 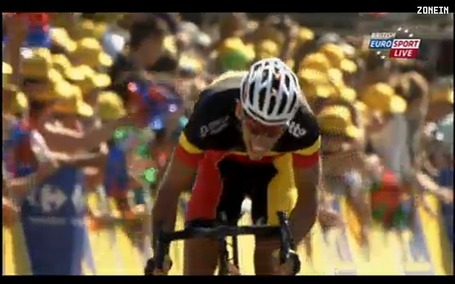 For months the press and forums have bookmarked this stage for the one and only Philippe Gilbert, who has made a career out of being unbeatable on short, punchy uphill finishes. And Phil, resplendent in his Belgian national champs jersey was not one to let us down, following a late surge by Cancellara with 700m to go and taking over as the Swiss champ blew a gasket with 400m remaining. Charging out of the pack for a fantastic second was none other than Cadel Evans (BMC) who came in 3 seconds ahead of a depleted pack led home by the reigning world champion Thor Hushovd. 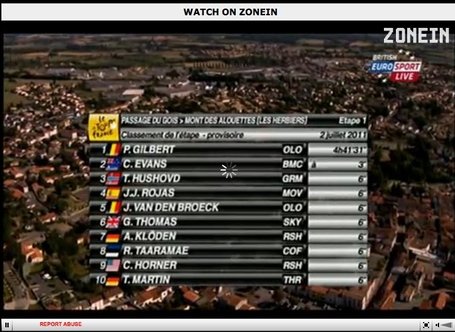 Perhaps the bigger story of the day was a split in the pack caused by a crash with approximately 10km to go. Contador and Andy Schleck were among the GC contenders who lost over a minute. In the front group were Chris Horner, Tony Martin, and Kloeden.

Now - how much does the time gap matter? Is there ANYONE who can beat Gilbert when he's in shape? Discuss these and other questions below!