By special request the music to watch the Giro by makes a quick return with an example of that rare and little known phenomenon, Spanish Merseybeat (and if you’ve got a strong stomach there are alternative visuals. Today is the stage that anyone who has watched the appearance of the one day Italian race, I Muri Fermani, has been looking forward to for months. The Muri Fermani is an Italian Gran Fondo that the organisers describe as their Flanders, as it covers a number of very short and sharp climbs, just like the Tour of Flanders, but the pro women’s race that has been run on the same day for the past two years has so far taken a far more timid route. So today is a chance for all of us to see what things could be, as the Giro donne finally dares. Not one of the climbs on todays route is more than 200m, but there are lots of those. The Muro del Ferro, the Iron Wall, which they climb twice, the last time to the finish line, hits 15%, and Muro Reputolo 21%. On a one day race this might turn into a Pooley long range escapade, but today it’s probably Vos territory.

The "Giro of the emotions" stops at the home of an athlete that the whole group has in its heart. It rides on the roads of Marina Romoli, from Potenza Picena to Fermo. For the Godmother of the corsa rosa, who will follow on the roads that saw her born and grow up on her bicycle, one of the hardest and most unpredictable stages that we could design. The best of the roads of the Marche with a complex profile gives a real mountain stage, continual changes in thythm, and a finale where anything can happen. A hundred and ten kilometers proposed entirely in the hinterland of the Marche in the provinces of Macerata and Fermo. An initial circuit that from Potenza Picena leads to the sea. After fifteen kilometers the road begins to climb towards Montelupone, Morrovalle and Montecorsaro. Climbs and descents on the Marche hills crossing Casette d’Ete, Sant’Elpidio a Mare. Then the feared climb towards Monte Urano, where so many great stages of Tirreno Adriatico have finished. Once more the descent to Campiglione, nearby Fermo. A circuit through the hamlets at the base of the citadel, towards the descent at Capodarco, another important symbol of cycling. The the unmissable finale with the dreadful ascent of the Muro Costa del Ferro that leads to the end at Piazza del Popolo in Fermo. It is a stage that truly deserves respect. Whoever wants to make the effort to win the stage will have to leave their guts on the road. Whoever wants to make difficulties for their adversaries for the GC will have to race right to the finish line. It’s not a day to save your energy, it’s a day for real cycling and real athletes. 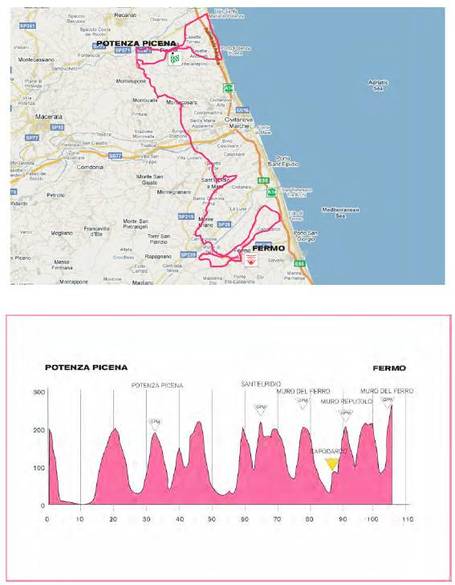