Share All sharing options for: Tour de France Stage 17: Another Day, Another Norwegian 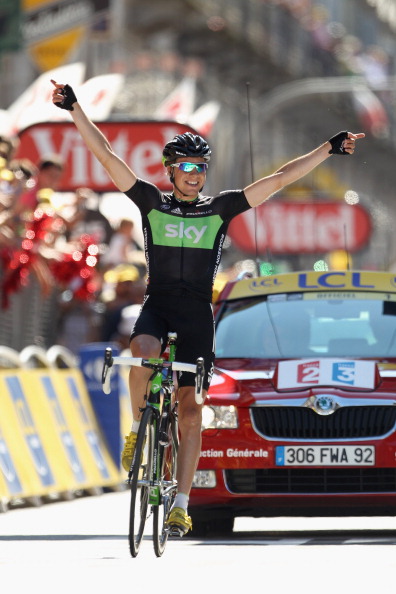 The Tour de France detoured to Italy, but it was a Norwegian, again!, who enjoyed it most. After losing narrowly yesterday to his countryman Thor Hushovd, today Edvald Boasson Hagen of Team Sky made amends with a late catch of escapee Ruben Perez Moreno. The Tour entered the Alps at long last, but the absence of major climbs left today to be contested by the breakaways... until the final 15km. There, the road narrowed and turned up, precipitating some attacks from the usual suspects, as well as from Boasson Hagen who was part of the closest chasing group, well ahead of the peloton.

The climb to Pramartino also set up one last, treacherous descent to Pinerolo. Several people went off the road, including Thomas Voeckler and Jonathan Hivert multiple times, both drifting wide into the same driveway. Saxo's Alberto Contador got on the wheel of the best descender, Euskaltel's Samuel Sanchez, and the two got away clear for a few seconds' gap, but the Schleck brothers reeled them in on the streets of Pinerolo to escape trouble. Voeckler's errant riding cost him 26 seconds to Cadel Evans and the other favorites, but he enters the high Alps tomorrow in Yellow, and a threat to steal this Tour.

The only notable change on the top ten was the exchange of places between the two Italians, as Damiano Cunego leapfrogged Ivan Basso as the latter couldn't stand the heat on the nasty closing descent. Rein Taaramae pulled back a few precious seconds on the white jersey lead of Rigoberto Uran, and the two enter the Alps with 59 seconds separating them. A trio of French riders -- Pierre Rolland (2.27), Arnold Jeanneson (3.16) and Jerome Coppel (5.08) remain within hailing distance. Jelle Vanendert retained the polka dots over Sammy Sanchez, with neither contesting points today.

Tomorrow should be a fantastic day, with massive changes to all but the points competition. 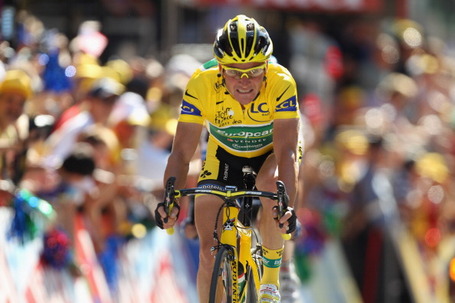