Share All sharing options for: Tour de France: The War of Nerves 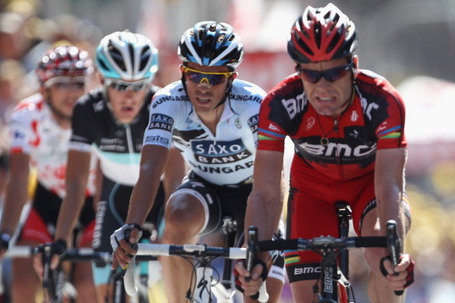 The Tour de France heads toward its final stages with two massive days in the Alps and a time trial around Grenoble. The battle for the Yellow Jersey remains unusually tight with just over three minutes separating the top seven riders. Though he lost time today on the tricky descent from the Colle Pra Martino, Thomas Voeckler still holds the race lead by 1:18. He has told the media in recent days that he expects to lose the Tour in the Alps.

Who will replace Voeckler at the top of the standings? Only three hard stages remain for the favorites to make their moves and force the selection that will win the bike race. The road is running out.

The Tour has become a taut war of nerves among the race favorites. Racing through the Pyrénées mountains, the top riders fought to a standstill. No one rider had the legs to break the others. Fränk Schleck gained a small advantage in closing kilometers of Luz Ardiden, while Damiano Cunego dropped off the back on the Plateau de Beille.

With every kilometer the tension has mounted in this Tour, as still Cadel Evans, Fränk Schleck, Andy Schleck, and Alberto Contador remain locked in a tight battle for advantage. So far, this Tour has been a battle of inches, and the top riders have fought hard for every gain.

Those gains have come in unexpected places. In the normal way of things, the Tour de France is won in the high mountains or in the time trials, and this edition may yet follow that pattern. But if Cadel Evans wins this Tour, he will wear Yellow in Paris because he found the unexpected spaces to attack and catch out his rivals. Playing the opportunist, Evans gained precious time early the Tour with smart riding on the classics style finishes in Bretagne and Romandie. Then, he turned the screws again with an aggressive ride on the wet descent into Gap.

The war of nerves rattled Andy Schleck at last on the raod to Gap, and he couldn't follow on the wet, sinuous descent. Descending has never been Schleck's strong suit, and a wet, technical descent requires iron nerves and mad skills. In that moment, Schleck had neither. Rather than push, he backed off. Under the circumstances, it was likely the right choice, though that decision may well have cost Andy Schleck the Tour victory. Calculation of risk is the engine of stage racing's drama.

Though Evans holds the likely advantage in the final Grenoble time trial, his position is far from secure. Fränk Schleck sits just 4 seconds behind Evans as the Tour heads into Schlecks favorite terrain, the high mountains. So far, Evans has hung on and foiled the efforts of the climbers to shake him. If they want to win the Tour, it's go time for Fränk and Andy Schleck, and for last year's winner Alberto Contador. 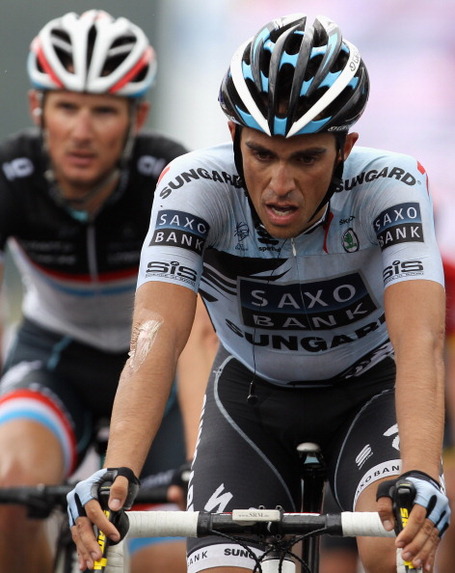 Greg LeMond used to say when he was racing that a rider only ever has one super day in a grand tour. As they raced through the Pyrénées, the level of form among the race favorites looked nailbitingly close. No one has yet had their super day in this Tour. One rider on his best day could completely overturn the general classification in the high mountains to come, especially in this Tour where the time gaps remains so very tight. If Andy Schleck has a super day on the Alpe d'Huez, no one will much remember his failure of nerve on the road to Gap. That's how it goes with stage racing.

And certainly, no one can count out Alberto Contador, though he trails Cadel Evans by two minutes. Contador has won six grand tours in a remarkably short time. If any rider knows how to time his attack to perfection, it's Contador. The Alps are Contador country. It will be a surprise in a Tour of surprises if the Saxo Bank rider does not make a move to take this Tour by neck and give it a hard shake. In the high mountains, two minutes can evaporate as quickly as the summer rain. To underestimate a rider like Contador is a fool's errand. Certainly, he knows how to win the Tour de France.

It's on to the Alps, the iconic mountains of the Tour de France. Certainly, after the close battle among the top riders in this Tour, they will fight hard in this finale. The war of nerves continues, as the Tour de France fast runs down the clock to Paris. Who will wear Yellow on the Champs Elysées is anyone's guess, though by the end of tomorrow when we stand high on the summit of the col du Galibier, we may well have a better idea than we do today.

Clip and Save! Here is the current general classification.