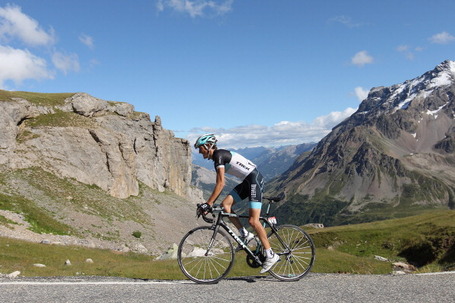 Andy Schleck won the 18th stage of the 2011 Tour de France with a brave show of force, launching an attack on the penultimate climb of the day, the Col d'Izoard, and systematically climbing past the remnants of the day's early breakaway. While his move was not quite enough to clinch the yellow jersey, Schleck now sits above all the other general classification contenders by at least 53 seconds.

Frank Schleck and Cadel Evans finished second and third, as Schleck jumped around in the final meters. Evans did a massive ride on the Galibier to turn back the clock on Andy Schleck. Ivan Basso crossed the line fourth. Thomas Voeckler continued to defy expectations by holding on for 5th on the stage, only conceding time in the final 300m of the stage when the chase group splintered.

The biggest story of the day was the expected shake-up of the general classification, and the défaillance of Alberto Contador on the final climb of the day. Contador conceded 1:30 to Evans in the final three kilometers of the Galibier. Samuel Sánchez also had a rough day at the races and dropped down the classification. The race has narrowed now, as Fränk and Andy Schleck battle for time against the implacable Cadel Evans.

Tomorrow will be even more interesting now, as Andy surely will feel the effects of his time off the front today and Evans is likely to feel a sting in the legs after doing all the work in the chasing group in the last 10km. This should set up Frank Schleck beautifully to put time into all his rivals, who will be both tired and watching Andy.

After surviving the Col de l'Izoard with the bigs, Rein Taramae of Cofidis took over the lead in the White Jersey competition from Rigoberto Uran of Team Sky. Pierre Rolland now sits second at 33 seconds after he held on to the Evans group until near the final slopes of the col du Galibier.

Mark Cavendish retained the Green Jersey, but not without a bit of drama. The grupetto finished outside the time cut, but because the group numbered some eighty riders, the race jury applied the 20% rule and allowed them to continue the race. If 20% of the race field is outside the limit, they will not be time cut, according to the rules. The race jury did apply a 20 point penalty to the riders in the group. Cavendish now leads the points classification by 15 points over JJ Rojas.

Racing was hot, hot, hot in the valleys as the stage started. The first hour averaged 50km/hr, which if you need reminding is hella fast. After some furious racing, 13 riders got away with 3 more chasing on eventually. The 16 were composed of:

FDJ nearly ruined their record of having a guy in every early breakaway, but Delage managed to pull himself across the gap with Burghart and another, saving the day for the exposure-hungry team. Delage has probably ridden close to 800km off the front of this race so far - talk about a hard way to earn a paycheck.

Climbing the Agnel, the break has over 7 minutes advantage but Andre Grivko (AST) and Phillipe Gilbert (OPL) launched an ambitious attack, hoping to close the gap. I don't think these guys could have chosen a more daunting task, for that is a LOT of real estate to cover. It's Belgium's national holiday, though, so perhaps that will give Gilbert wings. Really, it's surprising to see Jelle Vandendert not in the front group chasing mountain points. He would be set after today, if he isn't already. Plus, the chance to get another mountaintop win on your national holiday is hardly anything to be scoffed at. The two also got company from Leipheimer, DiGregario (AST), Koren (LIQ), Barredo (RAB), and Riblon (AG2R), but they're having a hard time getting a lot of separation, only pulling out 20 seconds after two kilometers of hard work. Stuart O'Grady is driving things on the front, dropping a lot of sprinters out of the back already. Over the top of the Agnel, Iglinsky out-sprints Devenyns for points on top of the climb, but I suspect he was more interested in the 5,000 euro prize for the first rider to cross the highest point in the tour. Not a bad payout for an hour of suffering, no?

In other news, Contador has been seen back at the race doctor's car already today. Speculation is he's complaining about his knee, even if there is little the race doctor can do for that, especially during the race. Whatever the reason, he's either sandbagging or showing his cards way earlier than he'll want to.

Onto the Izoard and Leopard Trek moved to the front to pick up the pace again, Andy Schleck sitting in third wheel. Then, with 60km to go, Andy attacks and quickly opens up a lead of close to two minutes at the summit! Not much reaction from the other favorites, though BMC, Euskatel, and Saxo start driving it at the bottom of the descent. Speaking of descending, Andy hooked up with Monfort at the top of the Izoard and actually increased his lead by 45 seconds on the descent. How about that, bet he won't be complaining about the descents today. Going under 25km to go and the gap is over 3 minutes and alternatingly holding steady or going out.

With 20km to go the gap is up to 3:40 between the two groups despite the work of sufferface Sorenson and 2 BMC riders with similarly painful facial expressions. Devenyns, Iglinski, and Silin were caught earlier by Schleck and Monfort and Devenyns are providing a lot of firepower to drive this group. Or, should we say D€v€nyns, as one commentator has quipped on twitter? Speaking of money, the guys over at NYVelocity are wondering if Euskatel has completely drained Contador's PayPal account after generously providing so much pacesetting. You really have to follow INRNG and NYVC on twitters this tour. En Fuego, these guys.

This is a really interesting situation on the road. There is a headwind coming down the Lauterant, but it's not eating into Andy's lead even after Monfort blows a gasket, promptly sending him backwards at an alarming rate. The group of favorites behind has workers on the front, but it's surprisingly their mountain goats like Navarro and CA Sorenson, which is not who you want to burn out so early. The favorites are all unwilling to work in the headwind for fear of being duped in the final 10km on the Galibier, especially by Frank Schleck. Really, Kim Anderson has finally taken a page out of Riis' book. This is what Contador needed to do, in my opinion, but missed the chance to. Watch as Evans gesticulates to everyone to work... 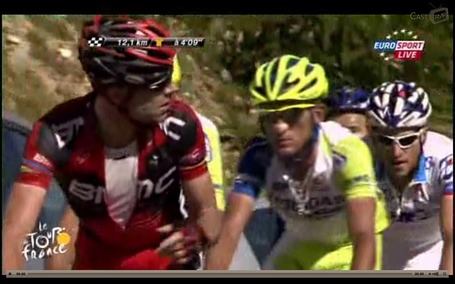 The turn onto the Galibier proper comes at 8km to go and Schleck dumps Iglinski almost immediately. There is nobody else ahead of him on the road, so he's looking good for a stage win no matter what. Evans attacks out of the chase group but gets chased down, then he has to do all the work as nobody else is willing to. To win the race, you have to ride. And also to risk losing it, as Andy and Cadel are both showing us. Voeckler is cannily playing on his non-favorite status to avoid doing the work to defend yellow. Canny, this dude.

At 6km to go Cadel has really started to eat into Andy's advantage, it's dropped 45 seconds now. The favorites group is also splintering, with Sanchez being the most notable rider caught out. Voeckler still looks comfortable on Evans' wheel and still has Rolland for company. Basso also has Smyzd, but those are the only workers left. Andy's style is less fluid than earlier, for sure. Can't say I blame the dude, though - he's been out front for 50+km already.

With 3km to go Andy is a full kilometer ahead of the chase group and the gap is stabilizing around 3:10-3:15. Evans not looking so fresh any more, and now Andy is on the steeper stuff where he has more of an advantage. Evans' grimace is a lot less nice to look at than Andy's.

2km to go for Andy, 3.5 for the chase. Contador pops! His run at this tour seems over, as he'll lose about 1:35 to the other contenders at the top. Also, Andy is chased by a Zombie, which injects a little urgency into his climbing. 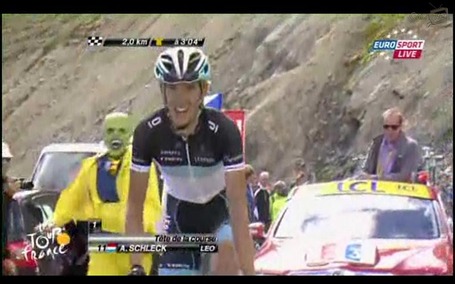 Into the final steep stretch and Andy is dying a slow death but comes in solo and smiling. Brave ride by the dude, seriously. Then Frank comes in second after attacking into the final 300m, Evans leads the others home 2:15 down. Gaps to everyone, who came apart in the final few meters. Voeckler cracks in the final 300m, but he manages to hold onto yellow, just barely!

Top ten on the stage: 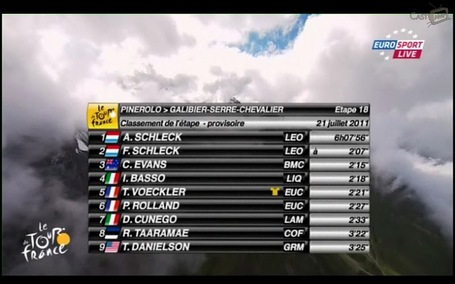