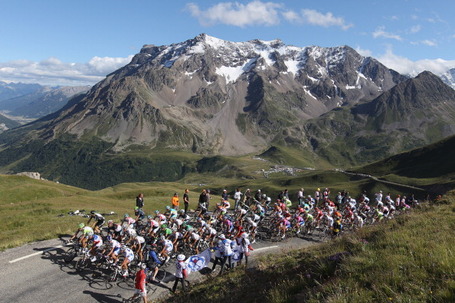 The Tour de France comes at last to the final mountaintop finish of the race with this short, explosive 109.5 kilometer stage running from Modane to the summit of the Alpe d'Huez. The riders will climb the col du Galibier, by way of the col du Télégraphe. Then, it's on to the twenty-one switchbacks of the storied Alpe d'Huez. The climbers, they are smiling.

In celebration of its long history in the race, the col du Galibier appears twice in this year's Tour de France. On Friday, the riders will climb the opposite side from Thursday's finish. Not like that's going to make it any easier, of course.

Friday's stage begins gently with 14 kilometers of descending. The easy times won't last, though and soon it's on to the first of the day's three major climbs. The first, col du Télégraphe runs just under 12 kilometers at a steady pitch of around 7%. It's a nice spot for the early break to go clear and the bigs to stretch their legs. Because the stage is short, the tempo will be hot from the start. "Going with the break" is much easier said than done on a stage like this one.

Around 50 kilometers of descending follow the massive climb to the col du Galibier. The long road to Le Bourg d'Oisans likely rules out an early play for Yellow Jersey, though stranger things have happened. The favorites should arrive together for the finale on the Alpe d'Huez.

The Alpe d'Huez has a deep history in the Tour de France. The climb rises 14 kilometers and the road twists tightly up the mountain. Each of the twenty-one switchbacks are numbered and carry a tribute to a past winner of the climb. Here's Coppi, there's Hampsten, here's Sastre. The steepest section of the climb comes in the opening kilometers which pitch up to over 10%. Then, the road runs more regular as it makes its sinuous way to the summit. The final kilometer through the ski resort is nearly flat, and the finish sits at 1815 meters in elevation.

The Alpe d'Huez is not the hardest climb in cycling, by any means. In cycling, it is said often that the riders make the race. Nowhere is this more true than the Alpe d'Huez, which has played the role of kingmaker at the Tour de France on countless occasions. On the Tour's most recent visit to the Alpe d'Huez, Carlos Sastre attacked from the bottom of the climb, won the stage, and took the Yellow Jersey of race leader. This is how it often goes on the Alpe d'Huez.

On Thursday's race to the summit of the col du Galibier, Andy Schleck went big in the hope of overturning the general classification. Schleck won the stage and improved his position, but could not take the Yellow Jersey off the indomitable Thomas Voeckler. Against all odds, against all predictions, Voeckler still holds the race lead in this Tour de France by 15 seconds over Andy Schleck. Fränk Schleck sits third at 1:08.

More troublesome for the chances of the Schleck brothers, Cadel Evans still sits fourth at 1:12. Evans did the ride of his life on the col du Galibier to roll back the clock on Andy Schleck and keep alive his chances of wearing the Yellow Jersey in Paris. He will have to do it again on Friday. Though Evans holds an ace card in the crono, he can not afford to concede too much road to the Leopard Trek riders on Friday's mountain stage.

The combined pressure of Andy Schleck's escape and Cadel Evans' massive chase ended the hopes of Alberto Contador. Last year's winner now sits seventh at 4:44. It's hard to imagine a resurrection for Contador come Friday when he suffered so desperately on the slopes of the col du Galibier on Thursday.

Damiano Cunego and Ivan Basso are tied on time in fifth and sixth. Perhaps they are wishing about now that this race was the Giro. Basso tried to contribute to the work of Evans on the col du Galibier on Thursday, but he clearly did not have much left in his legs. When Fränk Schleck accelerated in the final meters, Basso lost ground to Evans. Cunego, too, held until past the final kilometer, but lost the plot in the closing meters. Neither seems likely to have the legs to challenge on Friday. Both need big rides on Thursday and Friday to revive their podium hopes.

Of course, there is also the stage victory in play, a massive prize in its own right. No doubt a solid group of climbers will go out early in search of stage glory. Laurens Ten Dam has talked of trying to win this stage since the Tour first announced its course last November. It would be a surprise if the lanky Dutch rider does not try to join the early break. His wife has been camped out on "the Dutch Mountain" these two days past. Apparently, the general store in Le Bourg d'Oisons had already run out of beer.

With the Yellow Jersey still undecided and the stage running just 109.5 kilometers, the break will have a hard job to stay away to the finish. More likely, one of the general classification riders will have his day and win on the Alpe d'Huez. Will the Yellow Jersey at last change hands in this Tour de France? We'll see tomorrow.