Today was the halfway point of the Thüringen Rundfahrt - and everyone is starting to feel it. The stage was the longest on of the race, 145km (lengthened from 130 to avoid a dangerous road) starting in Schleiz and heading north through rolling hills, then back to the town for a 12km lap, with a hill, a descent and a slight rise to the finish line. It started out cloudy, and for most of the day was nothing but rain, attacks, twisty roads and cobbles.

I was lucky enough to spend the morning with one of HTC-Highroad's soigneurs, Arkadiusz Wojtas, and went to the feedzone with him and the other swanny, Beth Duryea - and I'll tell you more about what I saw there very soon - but in the meantime, my race report is below the jump. Now with photos! - and check out the photos on the race website, Monty's report-in-screenshots in the comments and the race organisers' video from the stage: 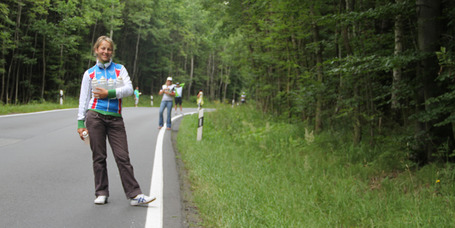 Today's feedzone was at 53km, on a really pretty, curving hill through pine forest, just up from a junction off the autobahn, so big trucks thundered past, shaking all the foliage. In this race, they close the road early, so we had 10 minutes of peace, calm and birdsong, with just the occasional outlying race vehicle passing us. The soigneurs tend to stop and chat - and then as the race approaches, jump to attention. When the race passed us, there were two small groups, with two minutes to the peloton - by the time they reached the top of the hill, it was one perfect breakaway. 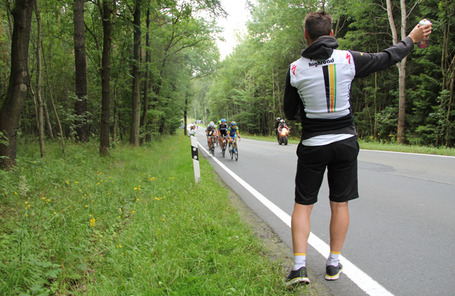 The day had started with all the usual attack attempts, but at 23km, the mountains point of the day, Svetlana Boubnenkova (Russia) passed first, with Emma Pooley (Garmin-Cervélo) crossing second, keeping her Queen of the Mountains jersey for another day. Just after the 40km mark, Trixi Worrack (AA Drink-Leontien.nl) attacked, followed by fellow German, Sarah Düster (Nederland Bloeit), Adrie Visser (HTC-Highroad) and then Claire Thomas (Horizon Fitness), Sharon Laws (Garmin-Cervélo), Jessie Maclean (Australia) and Romy Kasper (Kuota Speed Kweens). More riders jumped off the front, including Visser's team-mate Amanda Miller, until by the top of the feedzone climb, there was a 16-rider group with Lizzie Armitstead (Garmin-Cervélo), Sara Mustonen (Hitec Products UCK), Sylwia Kapusta (Gauss), Ruth Corset (Australia) Irina Molicheva (Russia) and Veronique Labonte (Juverderm), who dropped off before the end, but worked hard in the peloton.

It was a fantastic group, with most teams represented and no threats to Emma Johansson's yellow jersey, so was allowed to ride. With a rider in the break, Johansson's team, Hitec Products UCK, worked on the front all day, controlling the race and keeping the gap at two minutes for pretty much the entire race. 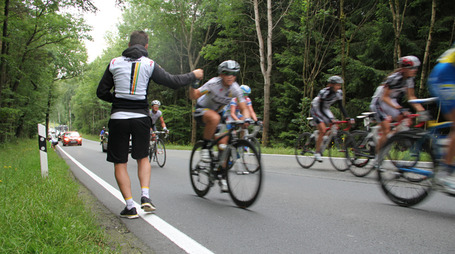 Up at the front, Worrack continued to attack, but couldn't get away. With the bad weather, the group were very careful on the descents and the corners, keeping out of danger. Mustonen won the first sprint points, Armitstead the second, and Sharon Laws, who, with Worrack, was doing a lot of the work on the front, won the third, as the race crossed the finish-line for the first time. 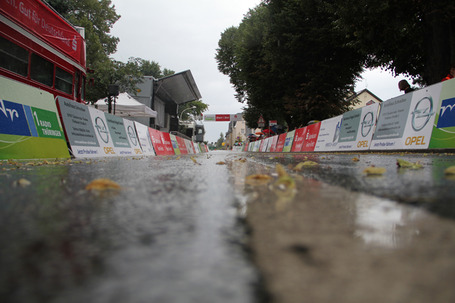 At this point, the rain was really throwing it down. At the finish-line in Schleiz, there was a happy atmosphere, with smiling spectators huddled under the trees, and under umbrellas, waiting for the race, despite the rain. This is Germany, so there are beer and sausage tents at the finish-line - and the race organisers always put on a great show - music (all the songs were about summer and sunshine, which made me grin) and a tombola with prizes, race commentary and a DJ walking up and down the line, giving out tombola tickets. I kept ending up singing along to the songs, catching the eye of other people doing the same thing, and sharing a smile. A group of teenagers started off embarrassed by their friend dancing to Las Ketchup, but soon were joining in. 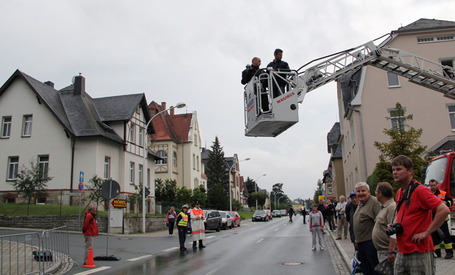 After the race past the cheering fans, the group started on the main event - attacks! Sarah Düster jumped off first, but was caught on the hill - and again, but she was caught once again. It seems like the group were expecting it to go to a bunch sprint, with Amanda Miller working to lead out Adrie Visser - but then at 400m to go, just before the last corner, Miller surprised everyone with an unexpected attack. She sprinted for the end, crowds going crazy, and despite sprint star Lizzie Armitstead chasing like crazy behind her, had time to cross the line with her arms in the air. 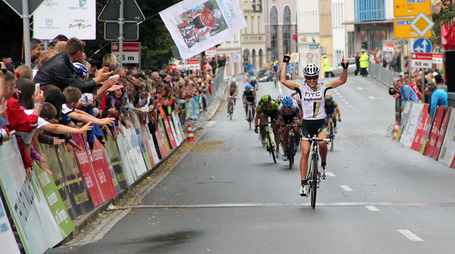 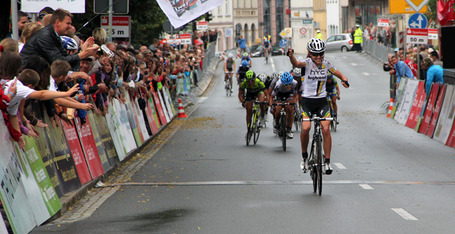 It was a fantastic win, and I was delighted for Miller! She worked so hard for Judith Arndt in the mountains of the Giro Donne - and after each stage would give us updates on the racing through her twitter and blog. Plus she also took time before the Giro to exclusively tell us about her hopes for the race - which has to qualify her as a Friend of the Café, right? Earlier in the day, Arkadiusz the HTC soigneur had told me that the best part of his job was celebrating when the team won, and it showed as he was waiting with Miller before the podium ceremony. 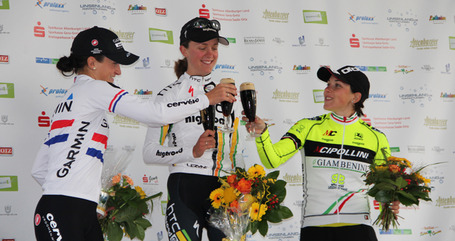 In GC news, there were no changes at all at the top of the classification. Veronique Labonte of Juverderm had lead the peloton across the line, and Emma Johansson kept hold of her jersey for another day. One thing I hadn't realised was that the competition for Most Aggressive Rider is an ongoing jersey competition, as well as a daily prize - it was no surprise that Trixi Worrack was in it by the end of the day. Amy Pieters (Skil Koga) keeps the young rider's jersey, and looks VERY happy about it, always! 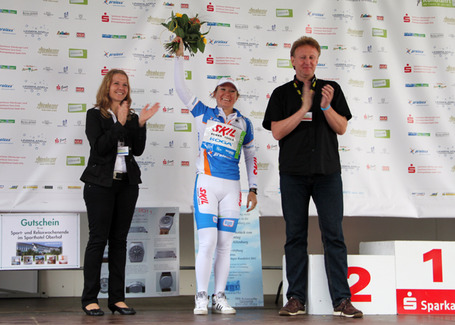 Tomorrow is the queen stage, returning to yesterday's roads, but this time for two ascents of the biggest climb of the day, nicknamed the Hankaburg after local hero Hanka Kupfernagel. The climb is a short one, but gets to 14%, and has one of those zigzag profiles. The ITT that follows it is just 19km, so it could be decisive for the GC. On the way back from today's stage, we drove through monsoon conditions on the autobahn, and there has been flooding from the rain in other part of Germany, so cross fingers for us that the rain has passed us by....