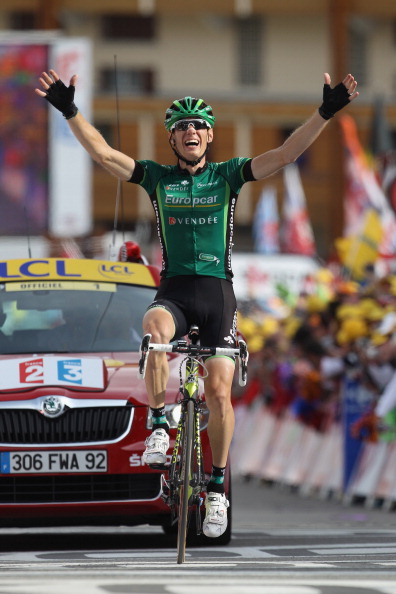 Pierre Rolland took what is easily the biggest victory of his career by winning solo atop the Alpe d'Huez today. The young French rider chased down a big move from Alberto Contador. Samuel Sánchez soon joined Rolland, and the two caught Contador inside the final kilometers. A late attack from Rolland gained him the stage victory. Sánchez finished second and secured the Mountains Jersey, Contador finished third. Rolland now also leads the young riders' classification.

Andy Schleck now leads the general classification, after the wheels at last came off for Thomas Voeckler. Fränk Schleck is second at :53, and Cadel Evans sits third at :57 seconds.

Today's 109km stage was animated by a long-range attack from Alberto Contador, who attacked early with Andy Schleck on the first climb of the day - the Col du Télégraphe. While Contador's move was brought back at the base of the Alpe, he went again on the steep early slopes of the final climb and looked to have victory sewn up as a stalemate settled in among GC contenders behind him.

Rolland, who had been caught and passed by Contador on the lower slopes of the climb, reeled the Saxo Bank rider in with 2km to go as Contador faltered. Rolland was able to go over the top of Contador as his 90km of escapades began to haunt him. Samuel Sanchez came in second and Contador third.

In the main group of contenders, Cadel Evans tried several times to shake the Schleck brothers, particularly Andy, but he was unable to get the separation he desired. Thomas Voeckler, though, gave up the yellow jersey as he cracked once on the Galibier and again on the Alpe. Andy Schleck now leads the overall classification with brother Frank in second, Evans in third, and Voeckler in fourth.

Pierre Rolland also took over the white jersey for the best young rider with his spectacular climb, though it will be hard for him to defend it against a superior time trial rider in Rein Taarame.

Tomorrow's stage is the last day of real racing in the tour and is a 42.5km time trial around Grenoble. This course was used in the Criterium du Dauphiné in June, where Tony Martin of HTC won the stage. Evans fared well in the TT, placing in the top 10, though many of his GC rivals were at the Tour of Switzerland instead, giving us little in the way of potential comparisons. With only 57 seconds separating Andy Schleck and Evans, the former will be hard-pressed to hold his advantage over the strong Australian TT rider.

Today's stage was a short one at only 109km, but in that distance they climbed the 1st category Col du Telegraphe, the HC Col du Galibier, and then finished atop the legendary Alpe d'Huez. Though a breakaway would stand little chance of staying away on such a short and action-packed stage, a number of riders were happy to give it a go. Among people in the break were Burghart (BMC), Griepel (OPL), Hoogerland (VAC), Perez Urtasaun (EUS), Buffaz (COF), Costa (MOV), Riblon (AG2R), Flecha (SKY), Duque (COF), Iglinsky (AST), Koren (LIQ), Pineau (QST), Izagirre (EUS), and Gutierrez (MOV). As you can guess, some of those names didn't last too long once things pointed uphill...

Climbing the lower slopes of the Telegraphe, where the gradient is steepest, Alberto Contador accelerated, getting only Andy Schleck for company. Thomas Voeckler chased alone, holding the gap to 30 seconds over the top. Gaps held on the minimal descent from the top of the Telegraphe to the foot of the Galibier, where Andy and Contador worked together to keep the gap open. Frank Schleck sat on Evans, playing the consummate teammate and brother. If things came back together on the Alpe, Frank would be nice and fresh, especially after not having to work at all yesterday.

The drop off the Galibier is the side they climbed yesterday, which is relatively steep and twisty - easy for gaps to open on. Contador is leading down most of the descent, and they are with Christophe Riblon and another survivor of the early break. On the climb up the Galibier, Voeckler cracked and went backwards past Evans et al. Sammy Sanchez bridges up on the twisty section of the descent and helps inject some pace to the efforts of Contador and Schleck.

The descent of the Galibier runs into the descent of the Col du Lauturet - the opposite side than was climbed yesterday - and this is a slower, more open drag downhill to the valley. Evans is bringing things back together, working with Sandy Casar and Tom Danielson. At the foot of the Alpe, even the Voeckler and Basso group are getting onto the tail end of the favorites. As with all good things, though, this does not last.

Pierre Roland and Ryder Hesjedal attacked immediately at the foot of the climb, hoping to get away for the stage win while the big names were still looking at each other. Cadel Evans attacked soon after, in the same place (roughly) that Sastre did two years ago. He's slowly brought back and Contador countered, going free and past Rolland and Hesjedal. A. Schleck and Evans are next of the contenders on the road, marking each other tightly. Evans will want to put Frank further behind to prevent attacks by him and also to put more time into Voeckler, but he has to watch out for Andy too. Behind, Sammy Sanchez was setting a false tempo, acting like a brother from another mother for Contador.

8km from the summit and Contador is flying solo, Rolland chasing valiantly behind. Sanchez and Peter Velits launch out of the main group and the Schlecks seem content to just set a quick tempo and stay with Cadel. Dangerous move by them, letting Contador and Sanchez gain so much time. 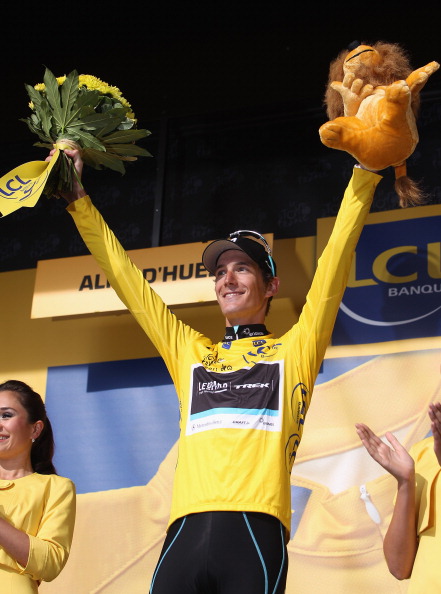 With 7km to go Contador has a minute in hand already. Dear Andy and Frank - remember what happened when Sastre did this? Contador likely will not win, but he may steal Frank's GC place.

With 3km to go, Contador is starting to look like someone with 90km and 2.5 big climbs of hard riding in his legs. Sanchez and Rolland catch back, and Rolland quickly dispatches the two with two successive accelerations. Behind, Cunego has attacked, though a move by Cadel marked by Andy Schleck quickly brings him back. Brother Frank is struggling behind.

Sanchez is working for Contador now, but there is no way they'll catch Rolland now. Sanchez will be content with the mountain points and Contador no doubt wants some more time to move up the GC, maybe aiming for a top 5 after tomorrow's time trial.

Evans attacks again, and once again Andy marks him without trouble. Really, though, it's confusing why he won't counter Cadel. I wouldn't feel good about my chances in the TT with only a minute's advantage. Though, when they come across the line Andy looks entirely spent. Not that I can blame him after two long-range attacks in the mountains in two days. Frank made it back to Cadel et al by the finish and retains his overall position. Of this group of contenders, Cadel looked freshest on the climb. Or, perhaps less shattered is a better turn of phrase.

Voeckler comes in over two minutes down, hurting but still looking pleased with his long run in the yellow jersey. 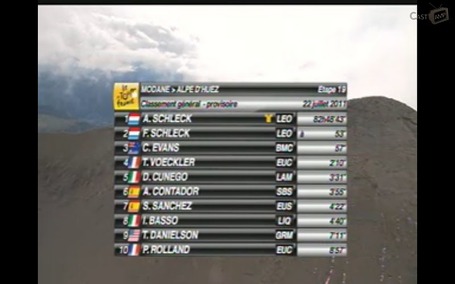