Today was the biggest stage of the race - the day started cold, grey and VERY windy, and the riders were extra-focussed at the start. With just the ITT and a crit-style stage to go, this was a chance to attack for extra GC or jersey points.... and as you can imagine, that's exactly what happened!

My race report is below - NOW WITH PHOTOS! but check out WomensCycling.net for the usual excellent report and photos - Monty has a fabulous screenshot report in the comments, and here's the race organisers' video

It was a late start today - 3pm, so lots of time for riders to relax, or pre-ride the ITT course, before it was time to go. It was an hour's transfer to the stage - you see the cars that start first loitering in the petrol station across the road, waiting to drive in convoy. You have a moment of doubt when you see a team ahead take a different road - their satnav is telling them something different - and I have a pang of nostalgia for how, in the old days, the drivers would have had to mark the race route on a real map - and then if a road is closed for roadworks, would have been able to find their way!

At the race course, the first thing is to find where the teams are parked. This race is so well organised, there are really good signs, and plenty of space in the side roads. You need enough room for all the vehicles, but also to be able to turn them round, get to the start of the course, leave with the roads still blocked etc - not so easy! On a cold days like this, teams with a camper are at a definite advantage - there's a lot of vehicle envy among the smaller teams! The biggest vehicle is AA Drink-Leontien-nl's monster truck-and-camper - it's huge, blue, marked up with all the names of the riders, very professional-looking. 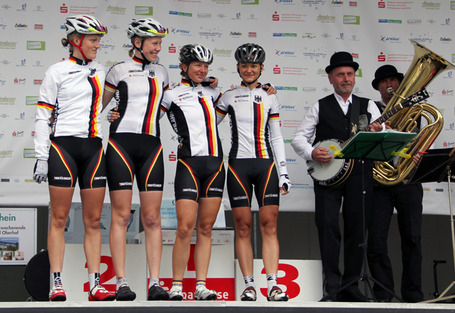 Zeulenroda, today's start and finish town, was much more modern-looking than the last stages, with a great town square. At every stage, the town has put on something different - today's was a traditional brass band, and at the sign-on, they played "Happy Birthday" to Elke Gebhardt (German National Team), and the crowd sang along. It was a lovely moment. 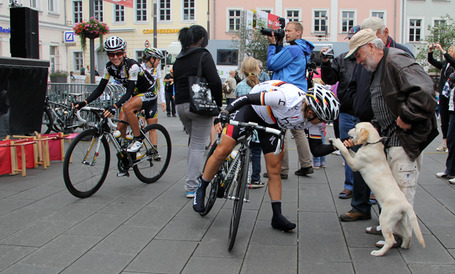 There was also a very sweet aside, as riders pulled up and spotted a very happy puppy with a cycling fan. If you want to make riders like Ina-Yoko Teutenberg, Chloe Hosking, Hannah Rich & Annie Simpson happy, give them a lovely dog to pet! 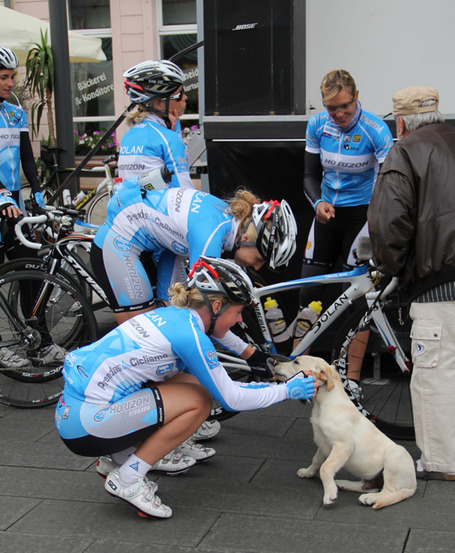 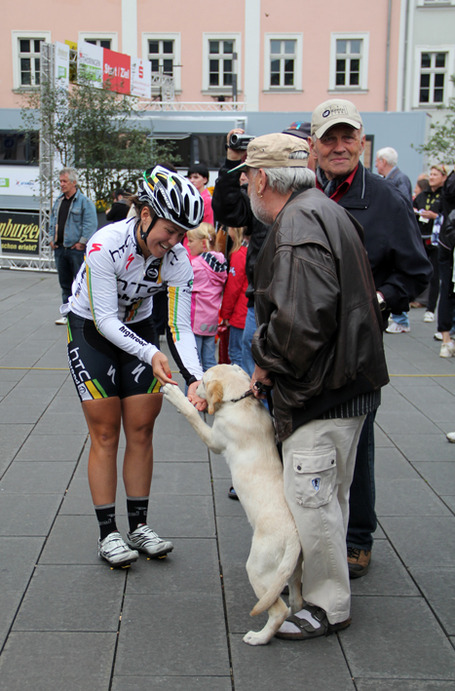 It was a narrow, slightly uphill finish, and the riders started lining up around 15 minutes to go - it was too cold to go earlier. It's always interesting to watch how they do that - they need to leave a little path so riders can get to the back, soigneurs can get through to collect wind-jackets - and there's always someone who will get in their way & turn their bike vertically, to try to get position at the front. Some of the biggest riders choose to start from the back, which seems like a sign of confidence. Standing next to the line-up, there's this huge smell of liniment coming from the riders - I don't know why it was a surprise, and it made a lot of sense in the cold, but it was something new to learn about the peloton! 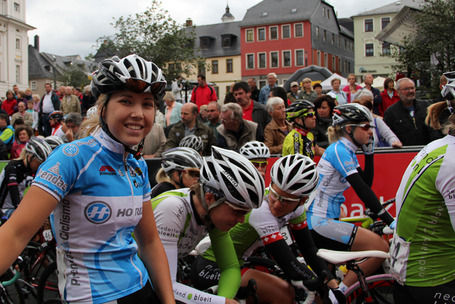 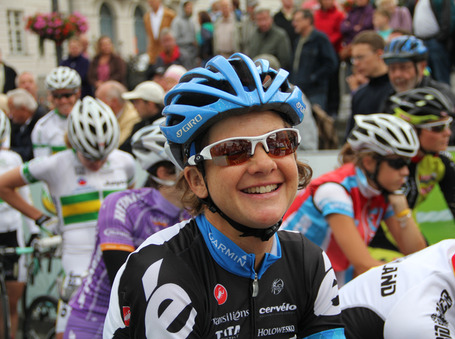 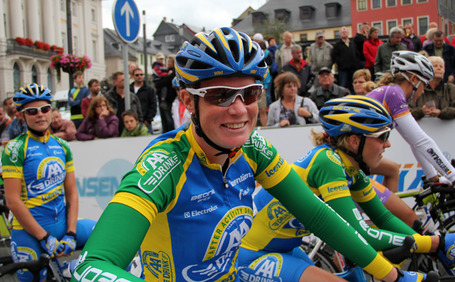 The stage passed through the town twice, and the feedzone was just up from the start-and-finish-line, so time to catch up on preparation (and sausages from the stalls) for the soigneurs. The race itself was hilly and windy - coming from every direction except from behind! It was a fast first 30km, with break attempts by Trixi Worrack (AA Drink-Leontien.nl) who's been trying at every opportunity, and totally deserves her Most Aggressive Rider jersey, and by Esra Tromp (Skil Koga) & Helen Wyman (Horizon Fitness-Prendas Ciclismo) - but nothing could get away, and the race settled, more or less. 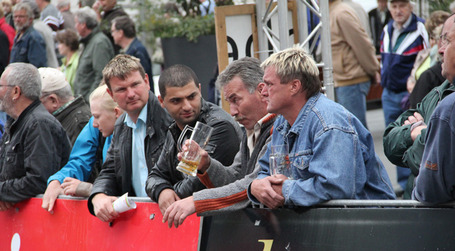 At the first mountains point, Svetlana Boubnenkova (Russia) attacked and crossed first, followed by Emma Pooley (Garmin-Cervélo). It was between that and the "Hankaberg", the biggest climb of the day, that a big group got away - 18 riders, including all the GC top 10 - Emma Johansson (Hitec Products UCK), Amber Neben (HTC-Highroad), Noemi Cantele (Garmin-Cervélo), Claudia Häusler (Germany), Amy Pieters (Skil Koga), Vicki Whitelaw & Shara Gillow (Australia), Fabiana Luperini (MCipollini Giambenini) and Boubnenkova - with Pooley & Sharon Laws (Garmin-Cervélo), Judith Arndt (HTC), Tatiana Guderzo (MCipollini), Natalia Boyarskaya (Russia), Worrack & Linda Villumsen (AA Drink), Loes Gunnewijk (Nederland Bloeit) and Sylwia Kapusta (Gauss). That was all the big teams represented, so it was clear it would stay away - the big question was what would happen next.

Kapusta crossed the Hankaberg first, and 12km later, they were back in the town for the first time. At the line, Häusler lead Cantele and Guderzo across, followed a few seconds later by the group lead by Arndt, with Pooley right behind her - and about 10 minutes later, news came that the race had changed again, and there a lead group of Häusler, Pooley, Boyarskaya, Guderzo and Worrack (again) had escaped.

This front group worked together, and then, before the second pass of the Hankaburg, Pooley made the kind of fantastic solo attack that she is famous for. She crossed the top of the climb first, cementing her lead in the mountains competition, and at the line everyone was wondering - would she make it all the way home?

Behind her, the four riders were caught after the climb, and the chase group rode hard - Judith Arndt jumped off the front, chasing down the British rider - but no one can touch Pooley on this kind of ride, and she crossed the line all smiles, making it look easy. Arndt followed in second place a minute later - with Emma Johansson leading the bunch sprint for third place and extra bonification seconds for the yellow jersey. Behind them, Juverderm-Specialized had worked hard on the front all day, but there was no one to help them - and Hanka Kupfernagel (Horizon) had jumped before the second pass of the climb named after her, coming in solo 2 minutes ahead of the peloton. 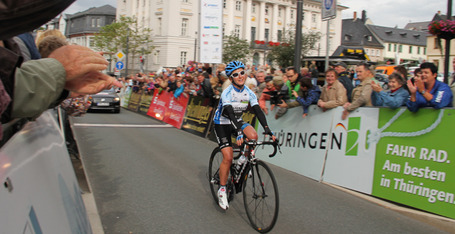 Today's comedy podium moments was Emma Pooley and the German beer.... It clearly wasn't her favourite taste, and the crowd loved the faces she pulled, as she looked like she was laughing at herself! 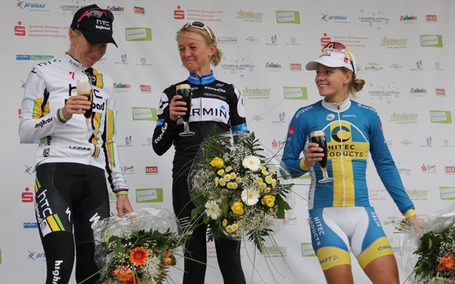 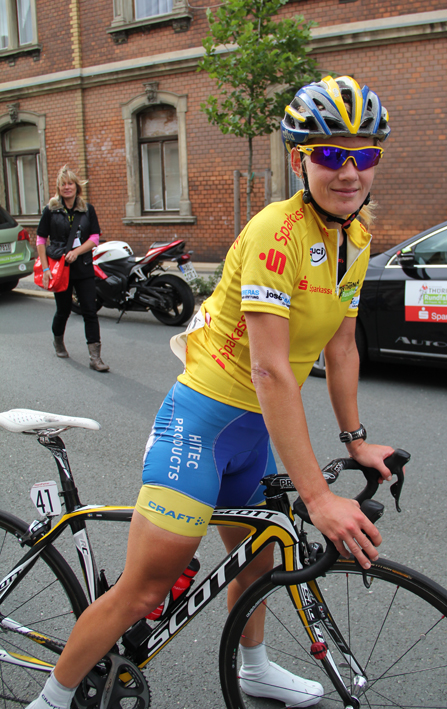 In the GC, Emma Johansson extended her lead by a few seconds - but there are some excellent time triallists behind her, and although she's also very good, she'll have to be riding her best tomorrow. Lizzie Armitstead (Garmin-Cervélo) kept her sprinters' jersey, and Amy Pieters, who is having THE most amazing race, keeps young rider's jersey. Trixi Worrack, of course, leads thecompetition for Most Aggressive. It looks like it will be a fight to the finish!