It was a big day for the General Classification - with only 11 seconds between Emma Johansson (Hitec Products UCK) and Amber Neben (HTC-Highroad), and then 5 seconds from Neben to Noemi Cantele (Garmin-Cervélo) and Claudia Häusler (German National Team), a lot hinged on the 19km time trial.

It was a really interesting course - 19km, technical, winding, with some hard hills, a couple of short cobbled sections, and a lot of wind where the road passed through the farmland. I was lucky enough to ride in the Garmin Cervélo team car behind World ITT Champion Emma Pooley EDIT! and you can see my photos below! - but as always, check out the great race report and photos on WomensCycling.net - and the race organisers' video:

Like yesterday, the stage started at 3pm - but this was a totally different atmosphere, none of yesterday's mellow start. From early in the morning, everything was busy - mechanics moving the ITT bikes out of the bike room, and stacking their road bikes instead (not every team uses the bike room - but if the team doesn't have so much space in their vehicles, it's really useful). It's a really busy day for those mechanics, having to build up and check every ITT bike, get them just right for the riders, and rearranging everything they're taking to the stage. 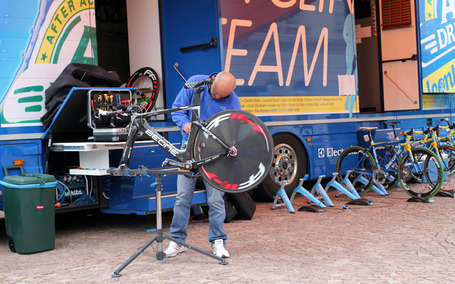 Lots of the riders had an early start - spinning on rollers, or heading out to try out the course, before coming back for the early lunch (served between 10 & 11:45) and then to sit with legs up, and trying to get some internet time. It felt more non-stop than previous mornings - or rather, little pools of frenetic activity and calm. 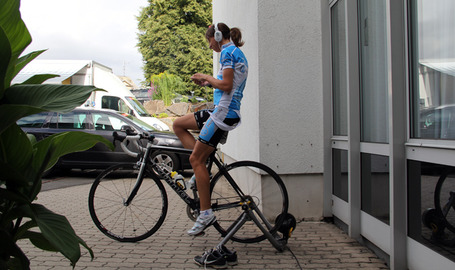 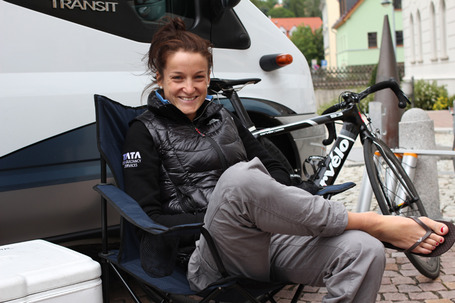 It was another windy day, twisty and hilly - and like on so many days this week, grey clouds hung over the course. Schmölln was packed with fans - and with the German brass band, beer tents and stalls cooking sausages in the open air, it was a real festival atmosphere. Everywhere there were people in club kits - it's only 12km from Altenburg, where the last stage is held, so there were a lot of spectators ready for a weekend of cycling happiness. 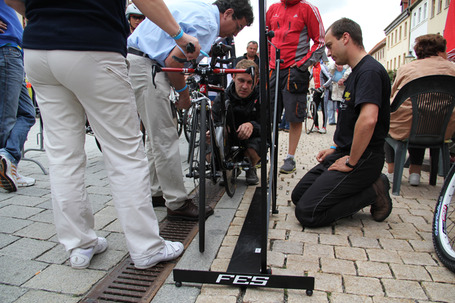 At the start-line, the UCI judges were checking out everyone's bike, and some riders looked even more nervous, especially if they didn't speak German, and know if everything was OK or not. My prize for team-work definitely went to the Garmin-Cervélo mechanic, who was up there with every rider, fighting for his bike and explaining to the judges, while reassuring his riders - he's a really hard-working, conscientious guy. 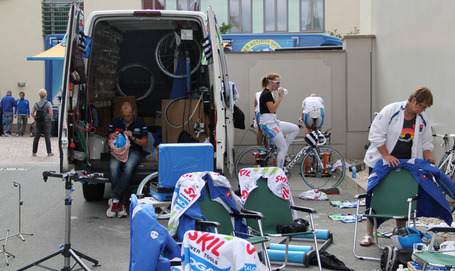 Once the first riders were off, there were only the big GC riders left spinning in the car parks - and team cars lining up in the side road, ready to follow. Not everyone gets a car, as there just aren't enough vehicles, so some riders were out alone, hoping they wouldn't puncture. 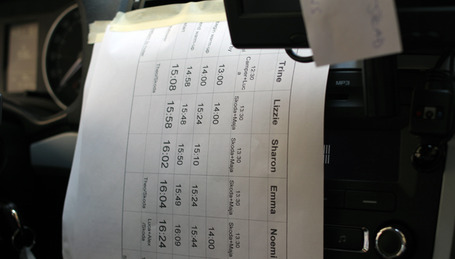 Emma Pooley had started the day on 14th in GC, after she had deliberately dropped back in Stage 2, playing a superb tactical race, taking Judith Arndt with her and out of the GC race. Theo Maucher, the Garmin DS was in the car behind her - as we sat in the side-road, behind the HTC car for Arndt, we could hear the race radio telling us who was in the lead - Olga Zabelinskaya (Russia) on 28:26. We could see the edge of the ramp, and see the clock counting down... then hear the beeps for the last 5 seconds.... and Pooley shot down the ramp - we were off!

Riding behind Pooley was an amazing experience for a fan like me. Watching when she rode out of the saddle, every leg muscle defined, the way she attacked corners, or the downhills, and from so close, was so different from seeing it on the tv. It's a funny thing, being in a big modern car with great suspension - it feels quite slow, but then, looking at the satnav, realising it's 42 kph, then 58, then 62.... 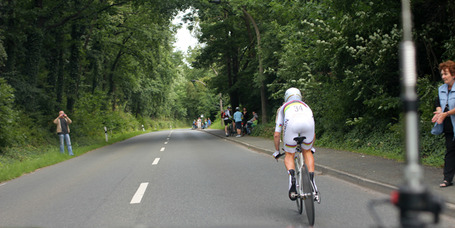 The road went from farmland, through yellow and green fields, down to little hamlets full of cheering fans. The radio only lasted for 500m around the start, so once we were out of the road, we had no updates on time. Theo Maucher gave continual encouragement - "Allez Emma, Sehr Schön! Gut! Go go go go!". I had my heart in my mouth, seeing the corners she took - and every time she hit the cobbles - but she's a fantastic rider, I had no need to worry.

The final climb was a killer, but riding behind her, Pooley made it look easy - glancing at the satnav and seeing her riding up, out of the saddle at 28kph... well yes, I am a huge fangirl, you can imagine!

As we pulled into Schmölln, the radio kicked back in. We were directed off the course for the final corner and sat in the car park, listening for results. Emma finished at 27.22.... 9 seconds behind Judith Arndt. An amazing ride for her - especially after her win in the queen stage! 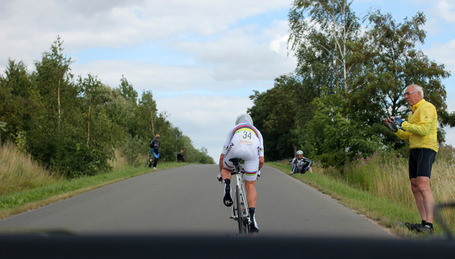 Back at the start/finish line, Arndt sat tense on the stage, waiting for news of her team-mate Amber Neben. There were no riders after Pooley that could challenge them, but the race was coming down to the last big riders for GC. Neben is a fantastic time trialler, but would it be enough?

It was a great day for HTC-Highroad - Arndt winning the stage, Ina-Yoko Teutenberg on the podium in third place, and Neben taking the GC - a pretty good birthday present for Judith Arndt! 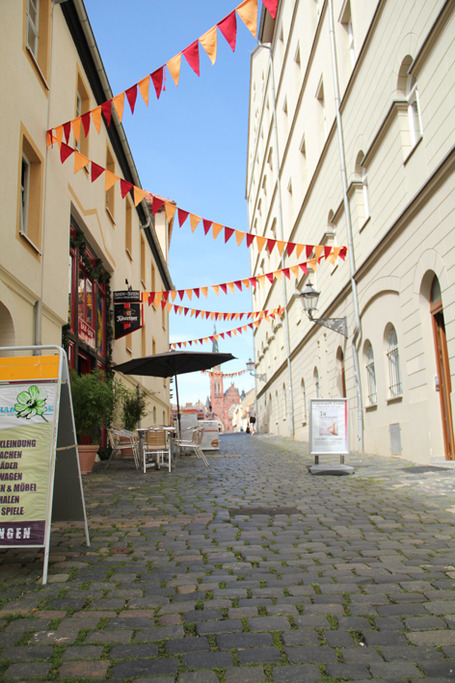 Another team with awesome results were Jayco AIS Australian National Team - Shara Gillow rode beautifully, coming in 5th on the stage, moving up to 3rd overall - with Taryn Heather, Amanda Spratt, Vicki Whitelaw and Ruth Corset all finishing in the top 25. I'd joked beforehand that they were riding pedal-stroke to pedal-stroke with Cadel Evans, but they really were! It was a very happy day for the Aussies - back at the hotel, when I said Cadel's name in the corridor, a huge cheer went up from the room where they all were sat, door open, watching the presentations at the Tour!

So it all comes down to the last stage. It's Crit-style racing, 4 laps with a VERY technical finish - as the lap hits Altenburg, there are narrow streets, about 5 different types of cobbles, and a tight right-hand turn from narrow cobbled street to narrow cobbled street before exploding onto the Markt for the start/finish line. It's a course that definitely suits Emma Johansson more than Amber Neben - but HTC is full of riders who can eat this stage for breakfast and enjoy it. Johansson will want the intermediate points - but will riders like Ina Teutenberg, Adrie Visser and Chloe Hosking let her have a chance? It all comes down to this! Cross fingers for an exciting - but above all safe - race! 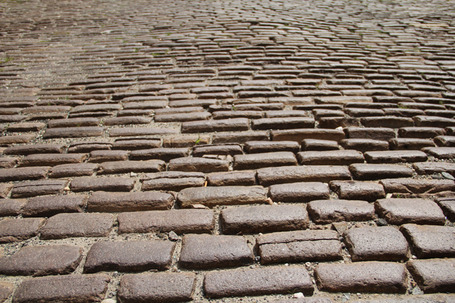 Massive thanks to Garmin-Cervélo's Theo Maucher, for the ride in the car - and to all the organisers and teams who have been so friendly!