I bet you were thinking it was all about the bike race there at the Tour de France. Wrong! As it turns out, the riders get up to all sorts of hijinx during the three week party in France. What? You were watching the bike race? And you missed all the fun? Never fear! Mmmaiko is so totally looking out for you. She's been scouring the Twitters and the internets for all the best Gossip of this year's Tour de France. So get yourself a fresh espresso, sit back in your comfy chair, and get caught up on all the most important stories from this year's Tour. Enjoy! ~Gav. 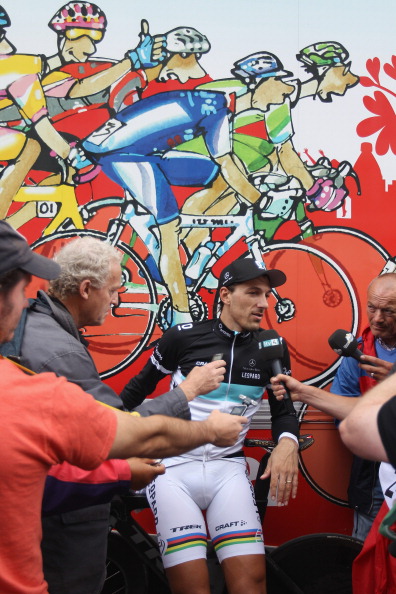 Fabian Cancellara, Olympic gold medalist and reigning world champion — a man with such bulging palmares would sleep like a king in a pimped out suite, you’d think. No. Fabian effin’ Cancellara has slept on the team bus like a hobo at Tour de effin’ France. Incroyable! He’s been plagued by “bad air” (roomie O’Grady’s gaseous emissions?), barking dogs, and poisonous “aircon” air. To think Fabian’s day starts on the bus and finishes in the autobus...where’s the dignity?

Speaking of “bad air”, let’s clear it all in one fell swoop. We have two Twitter confessions of in-race gassiness: one from Mark Cavendish and one from the possibly appropriately named Lars Boom. But the biggest gossip stink bomb is Frank Schleck, who crop-dusted an elevator full of Saxo Bank riders upon exit. Never say the Schlecks don’t attack...it happens.

Robert Gesink doesn’t seem like a prankster, much less have any sense of humor left after his Tour GC hopes turned south. Little do you know Gesink and teammate Carlos Barredo have an on-going prank war. This time, Gesink changed Barredo’s phone to display in Chinese. This is revenge for a Barredo prank earlier this summer, in which he switched beds when Gesink got up to tinkle in the middle of the night. We’ll let this one play out as long as it doesn’t end in a wheel attack.

Steak shy? Saxo Bank’s team chef made a huge sushi platter for dinner one night. Selected passers by at the dining room were invited to partake. Generosity or off-bike monkey-wrenching? So far no one has reported peeing positive from contaminated fish nor complained of “bad air” due to bad sushi. But raw fish sitting out in the dining room in the middle of summer? Eesh.

Astana’s team truck with a broken door locked out the mechanics and soigneurs with nary a 20cm opening. After sizing up riders and staff, Kreuziger’s masseur was drafted to squeeze, centimeter by centimeter, into the gap to open the door from the inside. Had he not been able to compact himself down to 20cm thick, second in line for the contortionist act was Paolo Tiralongo. Would being stuck in the team truck have been the strangest reason to DNS?

Vacansoleil opted for a huge mussels cookout, which sounds like an idea as bad as contaminated steak. Seafood cooked in large quantities sitting out on a hot summer day? An Imodium co-sponsorship may be a good thing.

It seems that Andy Schleck wasn’t the only Tour contender down on descents. After a hard-fought Stage 18, Thomas Voeckler hailed a L’Equipe motorbike to hitch a ride down Galibier. As the paparazzi swarmed around him, Voeckler meekly stepped onto the motorbike and clung onto the driver, a polar opposite to the image he projected a mere hour prior when he fought tooth and nail to keep the maillot jaune.

A little tenderness made this gruelling Tour bearable for the injured Laurens Ten Dam. First, a specially imported soft Dutch bread instead of baguettes to ease his chewing pains. Then, the team doctor showed up 2km from the finish at Alpe d’Huez with special medication: an ice cold Heineken.

On top of the libational salvation, Ten Dam got a hero’s welcome from the crowd. He took he time to high-five fans as he rolled across the line.

Whatever you do, don’t let your chiropractor give you a haircut! There are real barbers at village depart for riders’ coiffy needs. Yes, Tyler Farrar, we’re talking to you. We know you’re actually hiding out in the gruppetto because of your shameful faux fauxhawk ‘do. It looks like a bass-ackwards incarnation of Tom Boonen’s rapidly sprinting hairline. The helmet requirement is your saving grace.

It took years and tons of heartbreak for Cadel Evans to get his hands on a Credit Lyonnais lion, so it’s understandable he didn’t want to let it go. The winner of  the 2011 Tour de France was spotted going to the doping control trailer with the podium plush.

The lion will always have a smile, but he hopes Cadel believes in washing his hands after peeing in a cup.

What’s worse than getting second place yet again at the Tour? Getting second place looking like an awkward time-trialing banana who, not entirely unlike Superman, basically reversed the clock for his opponent. And that happened after your teammate posted a pic of you wearing a garbage bag online. And then, on top of that, doping control swooping in on you during dinner at a restaurant, forcing you to walk back to your table with a cup of urine. Sorry, Andy. We hope to laugh with you about all this someday.