Share All sharing options for: Thüringen Rundfahrt Stage 6: Excitement - and Emma Johansson - right to the line!

The final stage started early - 11am - so riders could start back on their journeys home with enough time. It feels like a sad thing, the way the race dissipates without a chance to say goodbye - but then, I'm a fangirl - for the riders, that's business as usual, and some of them were discussing what comes next from the moment they got there - Vårgårda for the top riders, and hoping for selection for the Road Worlds.

This stage was in Altenburg, where we've been staying all week - and home of one of the biggest race sponsors, Altenburger beer - if you ever get the chance, make sure you drink some - it's delicious AND supports women's racing!

The race has been designed so that there's action right to the last finish-line. With Amber Neben (HTC-Highroad) leading after yesterday's ITT by just 3 seconds over Emma Johansson (Hitec Products UCK), each one of the three intermediate sprint points, and the bonifications for the first three over the line would count. With 2 climbs and descents on each lap, and a technical section around the start and finish, with tight turns and about 4 different kinds of cobbles, it was more suited to Johansson than Neben - but then, Neben has some of the best sprinters in the world to support her, in a team that really knows how to race…. it really did feel like anything could happen!

Now with my photos! And check out the WomensCycling.net race report and photos for proper racing pictures - and the organisers' video for live action! 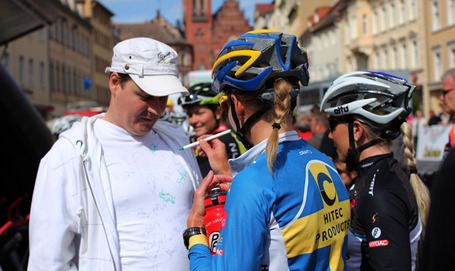 The Markt (market square) in Altenburg is a very pretty one, wide, cobbled, and today filled with stalls selling beer, sausages and cakes. The streets in the town have been full of bunting all week, with banners promoting the race all over. Today's entertainment included a bouncy castle for the kids, a pop band, drummers, the usual DJ, and crowds of happy people. At the start there were riders shooting up and down the cobbles, practising the turns on the final corners into town and checking out the cobbles - and I am eternally grateful to Vicki Whitelaw (Australia) for pointing out the comedy moment of the morning - a big dude in a white t-shirt, asking riders to sign his belly. Very funny! 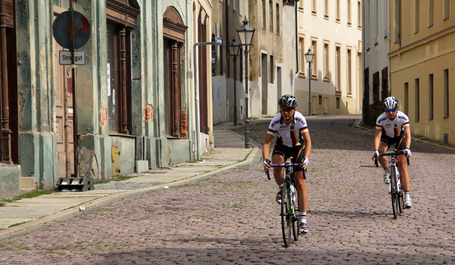 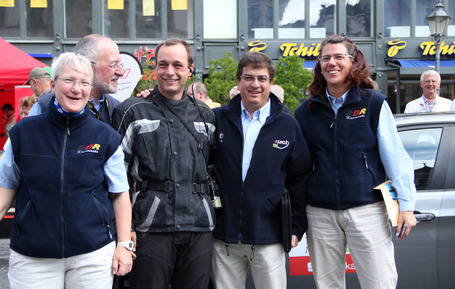 The UCI and race jury team before the start (very friendly, these people!)

The race is supporting the José Carreras leukaemia charity and every day they're here with a big stand. It's one of the things that makes me love this race even more, having a good cause attached. 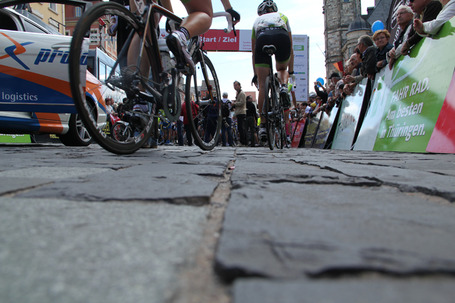 At the start-line, the peloton lined up wider than it was long, there was the smell of liniment mixed with sausages, and the next comedy moment of a rider with a really clever plan of arriving late, in the hope she'd be able to line up right at the front. But the UCI jury are eagle-eyed, and there was no chance - and lots of little grins from the other riders who'd spotted what was going on! 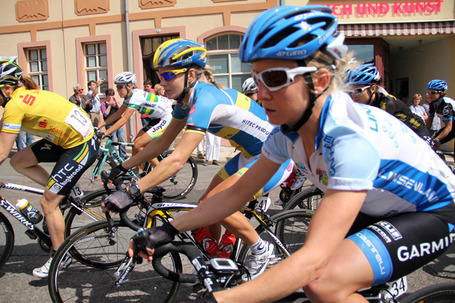 Emmas Johansson and Pooley on the first cobbled climb, just after the start-line 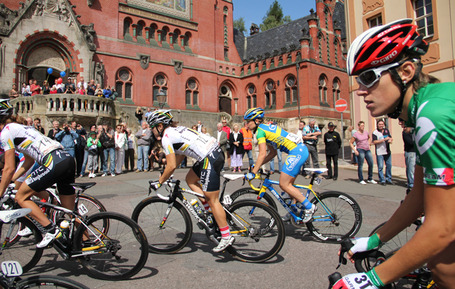 At the first sprint point, Ina-Yoko Teutenberg (HTC) crossed first in a group that seemed to have all the HTC riders, Emma Pooley (Garmin-Cervélo), Vicki Whitelaw & at least 2 other Aussies…. and Emma Johansson, who took the 2nd sprint points - 2 seconds, leaving her only 1 behind Neben.

Ina-Yoko Teutenberg leads at the final corner before the first sprint point - Emma Johansson in 2nd position, with Chloe Hosking behind her,& Amber Neben sitting 7th in line

On the second lap, Amanda Miller (HTC) broke clear early in the lap, and gained 10-15 seconds on the peloton. She stayed away for nearly the whole lap - and it looked like HTC had their Johansson-defying tactics down perfectly... until Miller was caught by a peloton lead by Hitec, just on the approach to the second sprint. At the second sprint point, once again Teutenberg lead over the line, but with Emma Johansson in 2nd place - taking her to race leader on the road - by just 1 second! 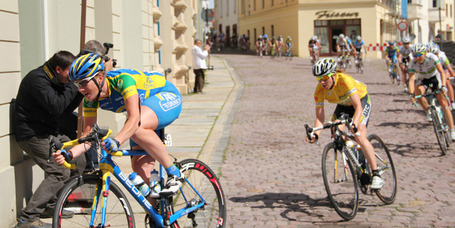 Just after the finish-line, a group attacked, formed by lots of exciting breakaway specialists - Sharon Laws (Garmin-Cervélo), Helen Wyman (Horizon Fitness-Prendas Ciclismo), Claudia Häusler (Germany), Loes Gunnewijk (Nederland Bloeit), Linda Villumsen (AA Drink-Leontien.nl), Ruth Corset (Australia) and Regina Bruins (Skil Shimano). Over the lap they made 55 seconds, and crossed the line together - Häusler leading, Villumsen in second, and Laws in third. Would they make it all the way? With Villumsen in the top 10 of GC, it seemed unlikely...

It was after the mountains point on the final lap that the break got caught by a small group of 10-15 riders - with Emma Johansson, and all the favourites. Trixi Worrack (AA Drink-Leontien.nl), in her Most Aggressive Rider jersey, wasn't content with making the catch - she immediately attacked, and was followed by Lizzie Armitstead, Judith Arndt and Natalia Boyarskaya. Behind them, the peloton had swept up the chase - and at 3km to go, the four were caught on the final climb. Coming into the town for the final time, Armitstead, Arndt and Boyarskaya attacked - again - and across the wide, cobbled Markt, it was a two-woman sprint, Armitstead and Arndt going wheel-for-wheel, ending in a photo finish - but Armitstead's sprint skills won, and she took the stage, and the final overall sprint jersey. 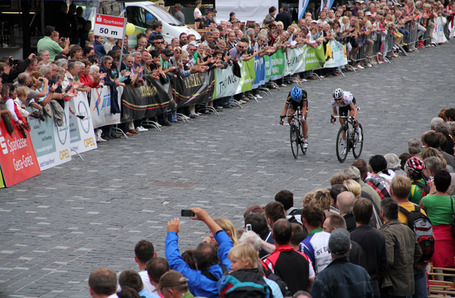 Behind them, Hanka Kupfernagel (Horizon Fitness) attacked off the group to take 4th place - and her fellow Germans Elke Gebhardt (Germany) and Trixi Worrack brought the group home) 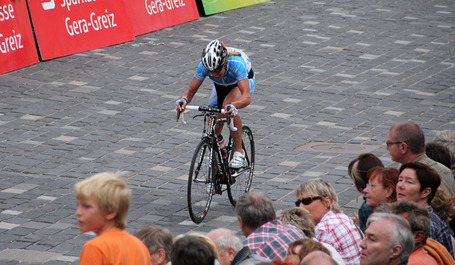 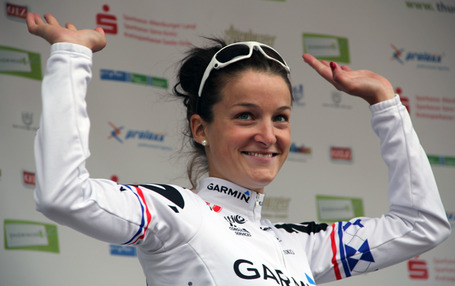 HTC-Highroad had ridden an amazing race, and worked so hard for Neben - but Johansson and her Hitec team were just too much. Johansson had taken the yellow jersey after the hilly stage 2, and she and her team had defended it valiantly, up until Stage 5's ITT. They worked so well together as a team, with Johansson using their strength - and there was a lovely moment on the podium, when Johansson insisted on bringing the whole team on stage with her.

Amber Neben and HTC were fabulous too - and taking the TTT, three stage wins and second in the GC - it was no surprise that they won the team competition.

Another team who'd worked hard were the Aussies, who fought hard every day, and defended Shara Gillow's third place in GC beautifully. Amy Pieters took the Best Young Rider jersey, which she held every day from the TTT - and in another cute touch, with flowers on the podium presented by a little girl - and it was no surprise Trixi Worrack won the Most Aggressive Rider competition. Emma Pooley (in her fantastic é-for-Cervélo ear-rings) won the mountains jersey by over 10 points - no one else had got close for days! 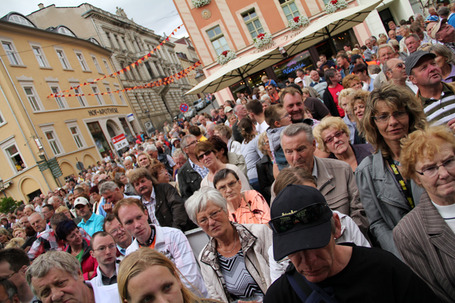 The crowds by the podium were huge, and so enthusiastic in the sunshine. There's a long wait before each podium, as all the riders are corralled into one place - and it's always fun watching the riders chat, Emma Johansson re-plaiting her hair, interact with the crowd & congratulate each other. This was the longest podium, of course - and there was an extra prize. Every year the race honours Amy Gillett, the Australian rider who died in TTT training at the race 6 years ago, by giving a prize in her name to a rider who has the best sporting attitude. This year it went to Sarah Storey (Horizon Fiteness-Prendas Ciclismo), who was riding her first UCI race of the year, her first ever 2.1 race, and finished comfortably - impressive, given that she's never ridden in a peloton of this calibre, and has just come off track training, working to her goal of racing in both the able-bodied Olympics and Paralympics next year in London. 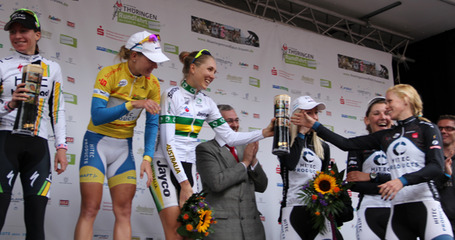 Shara Gillow shared her beer with the Hitec girls - Tiffany Cromwell was especially keen to try it!

The end of the race was signified by the glasses of beer all round - little glasses for the stage winners and HUGE glasses for the GC podium (glasses decorated with pictures of nuns and topless women). There are two things to do with the beer - drink it with relish, like Judith Arndt does, or hand it to a random person in the crowd, like Johansson on stage 4 and Armitstead on the final day - both ways charm the crowds, and Arndt got an extra laugh, helping Neben drink hers. 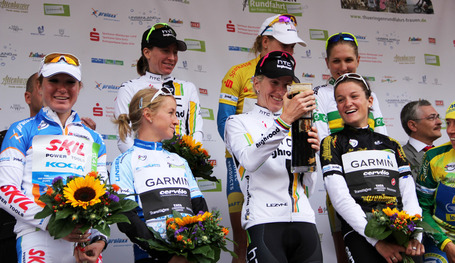 It was a superb way to finish the race - excitement right up to the finish, from what has been a very safe race. Huge congratulations to all the riders, team staff and especially the organisers - and my personal thanks to the organisers, and to Horizon Fitness-Prendas Ciclismo, for taking me along and letting me see all sides of bike racing. I really, really appreciate it! 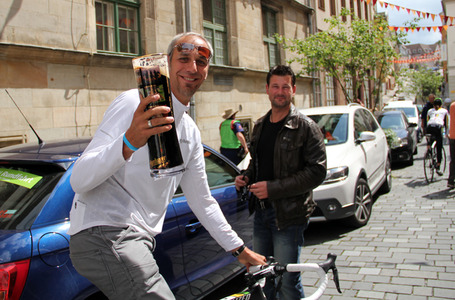 HTC-Highroad Jens Zemke showed off his amazing skills, cycling over cobbles with Amber Neben's giant beer in his hand, without spilling a drop!

Race report and photos: Sarah Connolly - all photos copyright & not to be used without permission