You win some, you lose some

Share All sharing options for: You win some, you lose some

As always, there are two sides to every story, and so thus with this year's Tour de France. At the end of three weeks of arduous racing, we end up with happyfaces and sadfaces, joy and pain, elated boys and broken men, winners and losers.

Some tales are obvious - Cadel, winner; JVDB, so not winner - some are less clear-cut. Below the jump, I talk Cancellara, ill-fitting jerseys, medicinemen and Denis Menchov as I round up some winners, and some losers. Care to join me?

One of the easier ones to begin with, French cycling came out better than your average Johnny Depp-with-kids picture. Voeckler showed skill and determination, Rolland won the Alpe D'Huez queen stage, they got 3/4 for the white jersey and placed no less than five compatriots in the top 20. And all this in the year when everything looked just that little bit harder, times up mountains were just a little bit slower, everyone looked just a little more tired... In short, things looked cleaner. Whether they really were, only time will tell, but with the evil monsters of doping banished to a kingdom far, far away - or at least hidden in a secret closet somewhere - the Frenchies came out smelling like roses.

Man, did they have a lot of work this year. It may have slipped people by because the end of the Tour was so great; but the beginning was pretty damn shit. 33 stitches for one Dutchie, 8 for another, an unidentified amount for a third. Collapsed lungs, broken hips, concussions, swollen ankles, broken arms and busted collarbones... and those are just the injuries I can remember from the top of my head. I haven't even mentioned Steegmans, Willems, Vande Walle, Popo, Kloden, Brajkovic, Levi, Sorensen, Flecha, Velasco, Contador, Barredo, De Gendt, my poor Ametxa, DZ-Nuts, Kreuziger, Horner, Chava, Coppel... Did I get them all now?
Come to think of it though, the doctors could just as well fit in the losers category, but man did they fuck up a lot this Tour. I'm all for HTFU, but letting guys ride on with concussions for days, undiagnosed broken wrists and hands, correctly diagnosed broken arms... sometimes these guys have to be protected against themselves.

The yellow jersey, the dream of so many cyclists. Except the very best unless it's the very final day, cause that yellow jersey, it brings some friends with it. Post-stage interviews. Picture sessions. Sponsor obligations. Race obligations. Work duties for your men. Hence why most years, some middle-of-the-road cyclist usually accidentally ends up in yellow. Middle-of-the-road man is over the moon at the best racing days of his life; the big guns are happy to let him have it. Everyone's happy. Except maybe the race organisers, who don't quite like it when the greats aren't a fan of their kit. Nocentini in 2009, Schumacher in 2008, Oscar Pereiro in 2006 - how did that work out for you, peloton? - DZ in 2005... you get my point.

This year though (as in 2010, I admit), the yellow jersey only donned the shoulders of the great. The best rider of the spring season for day one, the world champion for day two to eight, the posterboy of French cycling for day nine to eighteen, the apparent heir to Contador's throne for day nineteen and then the previous world champion and eventual winner for the final two stages*. Yellow in 2011 meant world-class cyclist.

Sure, he single-handedly dragged the Schlecklet's non-time trialling skinny asses across the line in a decent time for the TTT, but that was about it for the Bear from Bern. Without a prologue, all he had left was the time trial on stage 20 to continue his four year TdF running streak, but alas, no suck luck. Cancellara rode his time trial on damp roads while eventual winner T-Mart benefited from dry asphalt, but the change in weather conditions does not account for a 1 minute and 37 seconds. Maybe half of that is drops from heaven, the others is a Cancellara off-form.

Part of it was bad luck the kind QST must be getting used to by now: Steegmans and Boonen crashed out, Chavanel hit the ground and never found his French Champs-shape again, Ciolek got ill, Pineau's uncle died on the second rest-day, while working in the Tour de France caravan. Engels was on De Weert-minding duties all Tour. Kevin did great, improving on his 18th place last year with a 13th spot in the general classification in 2011. His fantastic performance was somewhat overshadowed though, by De Gendt's and most of all Vanendert's mountain performances. This left Niki Terpstra and Dries Devenyns to cover all the attacks. Devenyns had great legs, Terpstra not so much. But 13 attacks before the right one got away and two QST guys alternating between jumping in breakaway-attempts, Devenyns admitted to being half-way toast by the time the right break got away. 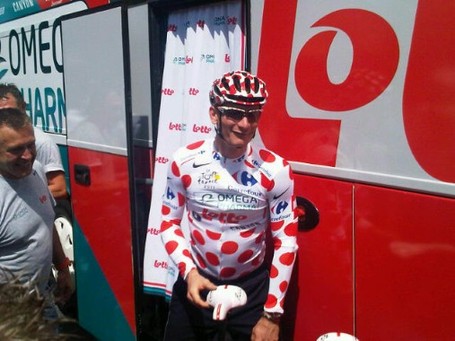 In the meanwhile, Lotto was getting all the good press in the world. Of course, it's easy to get good press when you have the PhilGil. But it didn't stop there, after the loss of their GC leader they stepped up and took the race by the scruff of the neck. Jelle broke free from his domestique cage, Greipel beat his nemesis, Phil kept on attacking; but more importantly, they were having fun. They made being a pro cyclist look fun. Phil's heart-felt happiness at seeing his roommate win, Lang trying to BMX his way into the bus, the team drinking champagne, Sieberg pretending to be Phil to fool the fans, drinking some more champagne, Greipel pretending to be Vanendert to fool the fans - the Gorilla does not fit into a skinny KoM-dude's jersey by the way - Phil driving the Lotto teambus... they were a joy to watch.
Which only made QST more invisible. 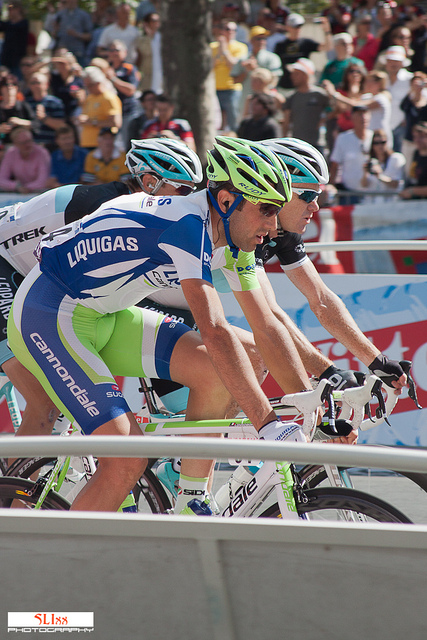 It used to be fluorescence got you noticed. Nineties Europop dancers, spacy blacklight paint and funky shiny fish: fluorescing got you attention. Not this Tour though. Quite the opposite even: the muited kits reigned the peloton. Classic red-and-black, corporate blue-white-black, all white with... yeah ok, I'll let the argyle slide, understated dark green... they all did fine. Do you know who did not do fine? Liquigas: fluorescent green. Basso rode quietly to a mediocre-for-his-status eighth spot, apart from that they did nothing, nada, zilch. Lampre: fluorescent pink and blue on fluorescent yellow bikes: Cunego rode quietly to a ok-for-his-status seventh spot,  apart from that they did nothing, nada, zilch. The teams that are usually so extremely visible seemed to have either borrowed Harry's cloak or collectively stopped by a bar only to sneak back in to the race in the final 5k. Either way, they were nowhere to be seen. Yo Lampre, next year you might wanna try something in black.

Man, imagine Denis sitting at home on his not-quite-comfortable but very straight-lined Russian couch, watching TiVo and Rolland do their thing. "вздох", he must've thought, "at least someone is doing my spot proud." He goes to the kitchen, rinses out his shot glasses, cleans some beets, makes a batch of borscht, goes back to the tv to see... the Saur guys rolling in with the grupetto. Every time. "Черт! I made room for them?!" Poor Denis. The team that got Geox's spot were thoroughly useless. Yeah, yeah, promotion of French cycling and all that. But France got plenty of promotion, and Saur didn't do any of it.

Then again, dude does wear fluorescent kit these days.

Know what I wrote about Jelle Vanendert before this whole thing started? Jelle's fate in this year's Tour de France is just that: invisibility. Quiet, dependable, bottle-fetching invisibility. Oh gs, you fool.

*at the end of the day