Helen Wyman and Ian Field are off to the USA!

Share All sharing options for: Helen Wyman and Ian Field are off to the USA! 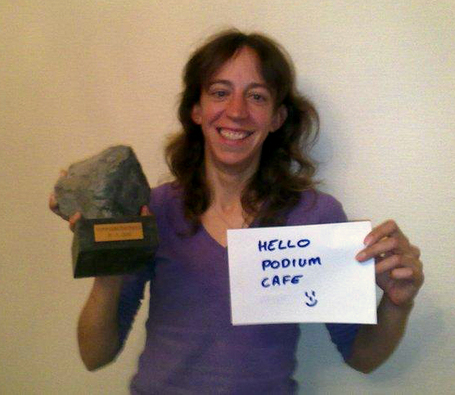 It may seem like a long time before the cyclo-cross season starts, but plans are already afoot!

You might know Helen Wyman and Ian Field from the fact they've both been interviewed on Podium Café (Helen before and after her win on the iconic Koppenberg, and with her crayon drawings exclusively for us, and Ian interviewed by  Gavia in November) - or for the fact they're locked in a grudge-match in the vds rankings - or because Helen spends her summer as a suicide breakaway expert for the Horizon Fitness and Kona teams on the roads...  But when the USA cyclo-cross season starts in September, they'll be part of a British invasion, coming to see how they compare to the east coast American cx riders!

Check out their press release below - and USA bike fans, if you're near one of the races, head over and cheer like crazy for them!

UK riders Helen Wyman (Kona Factory Racing) and Ian Field (Hargroves Cycles) will start their 2011/12 cyclo-cross season in the USA.  Starting in Breinigsville PA for the Nittany Lion Cross (10th September 2011), the pair will take part in 8 events on the east side of America.  Other key events will include Charm City (17th September, Baltimore) which is a double weekend of racing, the Nor'easter Cross (24th Sept) and Ellison Park (26th Sept)  in Rochester.  The trip will conclude with the Gloucester GP races in near Boston (1st & 2nd October).

"I’ve started my season in USA before and it really worked well for me" said Helen Wyman "This time I’m going to new venues which will be pretty exciting.  Adam Myerson has been a key factor in me choosing to race on the East Coast.  He’s been a massive help in planning our trip and I’m especially looking forward to his event in Burlington."

"I think the East Coast trip will work well for me.  I’ve not raced in different time zones for a long time, so it’s a good way to start and get the body used to things before the cross worlds in 2013" said Ian Field.  "I’ve not got a huge road program on in Europe so this is the perfect way for me to get racing before returning for the first two World Cup races in Europe."

The summer has gone well for the two leading British riders with good form shown on the road.  Helen has been guest riding for the UK Women’s team Horizon Fitness when not with her own Kona team, while Ian has raced in block in Belgium while training from his adopted home of Oudenaarde in Belgium.  As well as this, Ian has secured a contract for the Super Prestige cyclo-cross series in Europe while Helen will once again be racing a full GVA series.

"Getting a Super Prestige contract is big news for me.  To know I can start these great races against the worlds makes you feel a lot more secure as we approach the season.  It’s never easy as British rider to get the places you perhaps deserve, but my results last season have started to pay off and fingers crossed I can have another progressive season and show people what I’m made of" commented Field.

Nor'easter Cross promoter Adam Myerson commented "We've been working on making the Nor'easter not only an amazing event overall, but also an amazing 'cross race. Having international riders like Helen Wyman and Ian Field choose the Nor'easter as part of their early season campaign in the US is testimony to what we're building here. We couldn't be happier to have them."

"I made some big moves forward last year, but I’m not interested in standing still.  I’ve tweaked my summer to make sure I’m a level higher than before and I’ll finish off my preparation for the cross season with an altitude camp that will finish just 4 days before I arrive in New York.  I’m really confident this is going to great season for me. Being National Champion is a huge honour, but I want to be World Number 1 and World Champion, so I have to keeping working at higher levels if I’m to make these goals become reality" concluded Wyman

More information on the UCI cyclocross calendar for 2011-12 from Cyclocross magazine - with links to the organisers' email addresses to find out more information to go along and cheer!