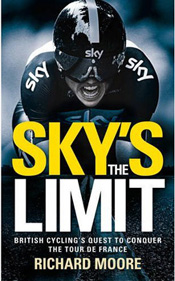 This week HarperCollins - the people behind Bella Bathurst's The Bicycle Book and Daniel Coyle's Lance Armstrong: Tour de Force - have teamed up with Podium Café to give you a chance to win Richard Moore's Sky's The Limit.

You've read the review of the Sky's The Limit and you've read the interview with Richard Moore, discussing some of what the book has to say. It's a pretty solid piece of reportage on Sky's first year and well worth the read, regardless of what your think of the team. Moore offers tantalising glimpses inside the team that swaggered onto the cycling stage with two key objectives: the long-term goal of landing a Briton on the top step of the Tour podium before the half-decade was out; and the short-term goal of not fucking it up the way previous British teams - Hercules, ANC-Halfords and the Linda McCartney Pro Cycling Team - had done.

What we do want you to do is tell us who you think is going to be the best-placed Sky rider at the finish of the Clásica San Sebastián tomorrow. Simple as that, really. For the tie-breaker, tell us the position they'll finish in.

You've two entries for this competition:

1) stick your pick and finishing position in the big white box at the bottom of the page. (Not registered to comment? Rectify that here.);

2) Tweet us your entry, using the hash-tag #PdCSkyComp eg

Do remember that you have two entries, one on site and one on Twitter. Use them both to double your chances of winning. Use your head here on the site and use your heart on Twitter. Or the other way around.

You'll find a review of Sky's The Limit - along with an interview with Richard Moore -  on the Café Bookshelf.