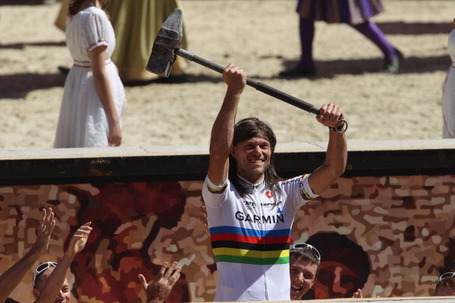 In the battle among the Bigs for the general classification, Cadel Evans, Bradley Wiggins, and Andy Schleck all gained time on pre-race favorite Alberto Contador whose Saxo Bank team finished eighth. Evans currently leads the favorites, followed by Bradley Wiggins at 3 seconds, Andy Schleck at 4 seconds, Levi Leipheimer and Chris Horner at 10 seconds, and Ivan Basso at :57. Yesterday, Contador lost 1:20 after he got caught out behind a crash and now sits 1:41 behind Evans. Today's stage added to his deficit, and he now faces a more difficult battle in his quest to win his fourth Tour de France.