Stage 4 and at last we get to the first sprint stage proper of the Giro. That means that just like in American Football it’s time for one set of players to take a break while another take their turn in the spotlight. Although when asked by Cicloweb whether she would be contesting the sprint, Marianne Vos couldn’t bring herself to say no. I wonder if Jeroen Blijlevens in the team car ever screams out his own version of "Jjjoooonnnyy!!! NNOOOooooo!! ? Not if she keeps winning I guess. Stage 4 has been shortened a bit for some reason that was never made public. Here’s the original course description:

The Giro Donne pays homage to Romagna, a land of cycling since time began. It does so with a spectacular stage, and not without surprises, as happens every day in such an important race. From Forlimpopi to Forli the road is short, but the course should not be scorned. From Rocca di Forlimpopi, the peloton starts a busy day with the climb to Bertinoro, passing Meldola, gateway to the Appennines. There’s a gentle ascent before they come back down again into the heart of the city of Forli where the spectacular city centre circuit begins that the athletes must ride six times before the final fight to the finish, which reaches as far as Villagrappa and Villanova before ending in the city centre. If the start of the day is hectic, the flat conclusion at high speed should favour the sprinters. And they won’t want to miss out on one of the most desirable victories of the corsa rosa.

But now that finishing circuit is gone and there is an extra loop to the North of Forlimpopoli, which is completely flat. If you don’t know this part of Italy, well that’s how the Po valley is. Flat hits mountains with no gentle transition or intermediate element. On account of that position, Forli has a very long history, going right back to the time when the Romans built the Via Emilia to connect Piacenza to Rimini in 183BC. That road is still one of the main roads in the area, although the building of the nearby autostrada has allowed the town-planners to sneak in a few extra bits of road furniture. Even so it makes a great finishing straight. We’ve lost a couple of sprinters already in Shelley Olds and Lizzie Armitstead, but those who’ve struggled through this far just for a chance to do their thing include Teutenberg, Rochelle Gilmore, and Giorgia Bronzini. 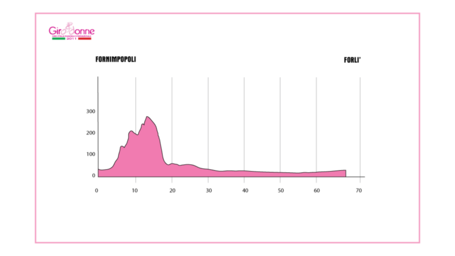 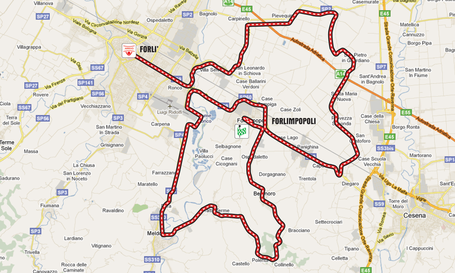