Share All sharing options for: San Sebastian: Gilbert Shocks... Nobody 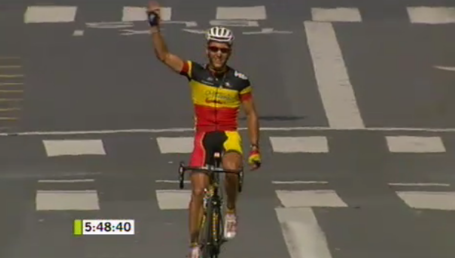 In a manner that has become the story of the 2011 cycling season, Philippe Gilbert blew the competition off his wheel in the final kms to win the Klasika Donostea, a/k/a Clasica San Sebastian. A chasing peloton of favorites came into the outskirts of the city with only Carlos Barredo of Rabobank up the road, and with about 3km to go Gilbert decided the time was right, the discord in the pack was stifling, and the race was there to be won. Gilbert quickly put a good 15 seconds into everyone, and while Samuel Sanchez and Haimar Zubeldia tried to form a chase, it was too late. Gilbert soloed home with a 12 second gap over Barredo, and a sprinting pack of a dozen riders was led home by Greg Van Avermaet. The race in general was very selective, with no chance of a large group making it to the line. Lovely, fun day in San Sebastian today... results: