One of my tasks for the year was to collect swag to give away as grand prizes for the season-long Virtual Directeur Sportif competition.  I thought it was about time I showed you what we had, as there is going to be a mini competition - with prizes for the 3 Virtual DSs whose teams do best in the Giro Donne!

So, who could I ask to help present the prizes?  There was only 1 choice!  Step forward, Barbie Barbie! 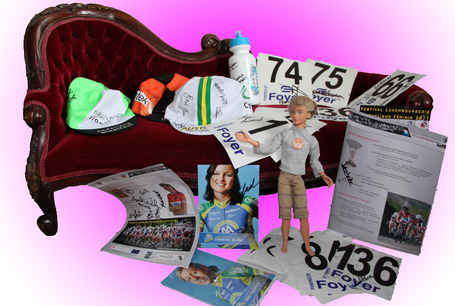 Massive thanks to all the teams & riders who've donated prizes - and to Majope for helping me show them off!

If you're wondering who Barbie Barbie is, check out his website

So, what IS in the pink box of swag, that grins at me from the corner of my living room?

Well, the prizes on offer are:

Nederland Bloeit cap signed by the team from the Luxembourg races - Marianne  Vos, Annemiek van Vleuten, Loes Gunnewijk, Patricia Schwager, Emilie Aubry (please note!  This is reserved as a prize for the end of the whole competition!)

Race numbers from the Luxembourg races:

Individual numbers from Luxembourg signed by

Martine Bras' numbers from the Ladies Tour of Qatar

(probably 1 number/set of numbers per prize from this list, but we'll see)

2 x medals from the Halfords' Tour Series (as seen here)

Set of photo cards from team AA Drink-Leotien.nl, with Chantal Blaak's signed by her

So how will it work?  Well, because she's the intermediate game winner, we have decided AckAck should choose a prize first, and then the top 3 VDSs can pick their prize from the list - everything except for the star prize of the NB cap, which is waiting for the end of the comp.

If you want a reminder for how the race will be scored, check out the vds calendar - the race is vds 1, so points go:

We'll work out how to award the final prizes for the overall competition once we see what we end up with!  Hopefully this won't be the only swag that I collect, so I'm aiming to have more by the end of the competition - so if any riders or teams are thinking "I'd LOVE to give something to the cause", there's still time!  Send me a tweet at @_pigeons_!