First blood to Teutenberg. The GC contenders get a little more respite in Tuesday’s long, flat stage into Verona. And as the organisers point out, that’s the Verona famous for being the home of Dante’s patron, with not so much as a whisper of that other writer. Whereforeart he anyway. Yesterday we counted them out and we counted them back in again, to the number of 128, but we may have had a couple of psychological wounds rather than complete knockouts. Rochelle Gilmore finished way back, but that could just be the sort of misfortune that will drive her on to do better tomorrow. Meanwhile Mara Abbott who crashed in the fog of stage 2 ended up off the road again, this time in a roadside ditch. Interestingly the RAI commentators didn’t find that worthy of comment – have they already written off her chances of retaining her title? There are still, not speaking at all metaphorically here, many mountains to climb. And just as interestingly Marianne Vos chose not to fight out the sprint. Too fast for her, said she. Going for the GC, say we. Stage 5 is really flat, and I can’t add much to what the organisers had to say, apart from the fact that I love this gothic statue of Cangrande della Scala even though those gloriously chunky legs still don’t seem strong enough to support all the marble above them. This is of course a few generations before Michelangelo. HTC are talking about how they might not be able to control the day like they did today. I reckon they’ve just read that bit about the scorching heat of the plain.

From the heart of Emilia Romagna as far as one of the cities with which cycling has a strong bond that has existed for many years. A stage that is marked out as one of the longest, fastest and hottest of the Giro will finish right in the centre of Verona. From Altedo in the province of Bologna we cross one hundred and thirty kilometres right up to the foot of the Arena, another symbol of Verona and of a United Italy that the Giro Donne continues to uncover daily. Emilia Romagna and its plains provide the landscape without an end in the first part of the course, then after passing through Poggio Renatico and Bondeno we turn North, entering the Veneto before briefly touching Lombardia and its lowest province of Mantova. Then we head towards Verona, crossing the town of Nogara, and, towards the end of the day, the small town of Vigasio. That precedes the entrance into Verona, home of the Worlds in 1999 and 2004. And now the town of the Scaligeri enters into the history of the Giro Donne, dedicating a finish line that will be the target of the pure sprinters. They may leave a break to burn itself out in the scorching heat of the plain of the Po, but they will take up the reins of the course when the scent of the finish line becomes slowly more intense. A stage not to miss, a festival of pure sprinters and a guaranteed high-speed spectacle. 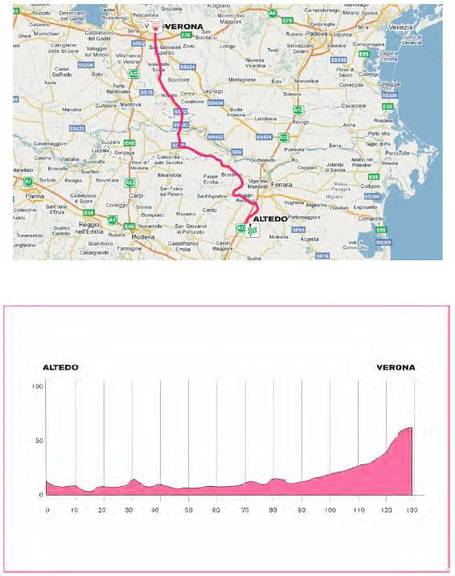