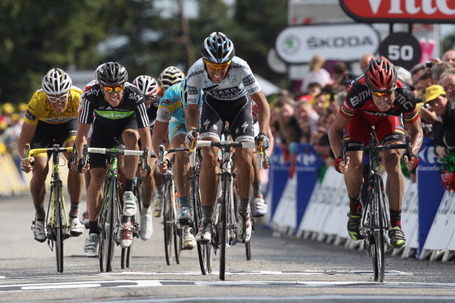 Cadel Evans of BMC Racing Team won today's stage of the Tour de France in a photo finish sprint Alberto Contador of Saxo Bank. The two riders crossed the line together after a tense battle on the slopes of the Mûr de Bretagne. Alexandre Vinokourov of Astana finished third. Yellow Jersey Thor Hushovd of Garmin-Cervélo finished with the front group and successfully defended his race lead.

As the field approached the Mûr de Bretagne, the final climb of the day, the BMC Racing Team took control of the front and put Cadel Evans in perfect position. On the Mûr de Bretagne, the top riders played a taunt tactical game. Alberto Contador tried an early attack, but the others proved quick to jump on his wheel and gave him no space to ride. Cadel Evans kept his nerve, and while the others in the group tried to force him to lead out the sprint, he controlled his effort until the final meters.

On the line, Alberto Contador and Cadel Evans crossed together. The photo finish showed Evans ahead by half a wheel-length. Podium kisses for Cadel, nothing for Alberto. Today marked the first ever road stage victory for Evans at the Tour de France. The Australian previously won a time trial stage after Alexandre Vinokourov was disqualified for doping. Here are the full results.

In the general classification, Thor Hushovd successfully defended his race lead and continues to wear the Yellow Jersey. Hushovd hung tough on the final climb, which was not his favorite terrain. In the absence of time bonuses at the finish, Cadel Evans remains in second place by 1 second. Fränk Schleck is third at 4 seconds, David Millar fourth at 10 seconds, Andreas Klöden fifth at 10 seconds.

A few small gaps opened up on the final climb of the day and added to the advantage Cadel Evans is accumulating bit by bit over these first few stages. Ivan Basso and Bradley Wiggins dropped six seconds to winner Cadel Evans. A big group came in at eight seconds, including Chris Horner, Andy Schleck, Andreas Klöden, Roman Kreuziger, Levi Leipheimer, Christian Vande Velde, and Tejay van Garderen. When the race hits the mountains, these time gaps will be long forgotten.