According to the book, this is just one km shorter than yesterday’s stage. If you want to trust the book. Stage 6 is sort of a stage for the sprinters, but it was also designed to honour Giorgia Bronzini in her home town of Piacenza, so there’s a steepish climb of some 200m at 30km from the end, followed by a narrow, technical descent. In a long interview with Davide Ronconi, Sara Brambilla, one of the organisers of the Giro Donne, spoke of how designing stages to honour star riders is one of their plans to increase the popularity of the sport. Honour here with the not so hidden meaning of tilting the odds as heavily as you can in their favour. See also the stages up Monte Serra for Fabiana Luperini a couple of years ago. However Giorgia Bronzini spoke to RAI this morning and said how she was happy with her second place in stage 4, and that she is still working towards being at her peak for the year in Spetember at the Worlds. I’d guess that this stage will go to a breakaway. Before today I would have predicted Nicole Cooke, but let’s go instead for her teammate Marta Bastianelli.

If you look at where the Giro is departing from and arriving then today’s stage seems to be one made for the sprinters. But the Giro has instead designed a transitional stage that could be a great day’s cycling. From Fontanellato, where the fidentine dialect is spoken, to Piacenza where the division between Emilia and Lombardia is indistinct. But not the direct way. One hundred and twenty kilometres is not trivial.At first there’s a completely flat start to the day, crossing San Secondo, Busetto, the home of Verdi, up to Monticelli d’Ongina, the world garlic capital. Then the race turns towards Caorso and the Appennines. And here begins the most anticipated part of the course. As the altitude changs then so does the landscape that surrounds the caravan. After Fiorenzuola the road rises gently up to Carpaneto Piacentino. We climb as far as Ponte dell’Olio (bridge of oil) and beyond, passing Vigolzone and Grazzano Visconti, a little medieval jewel in the history of Italy. The hills of Piacenza will not make the difference, but they will break up the rhythm of the sprinters’ teams, opening up the final part of the day to possibilities other than a bunch sprint. The finale, heading back to the city of Piacenza, birthplace of current rainbow jersey wearer Giorgia Bronzini, is downhill. Fast and narrow. That could also allow the girls who were in trouble on the climb to get back, or at least cut down their gap by no small margin. It’s not a stage that’s going to disrupt the GC, but for sure it’s not cut to suit the cloth of the pure sprinters. The most anticipated at the piacentine finish line will be Giorgia Bronzini, the rainbow-bedecked symbol of a tide in women’s cycling that is on the rise. In all senses. 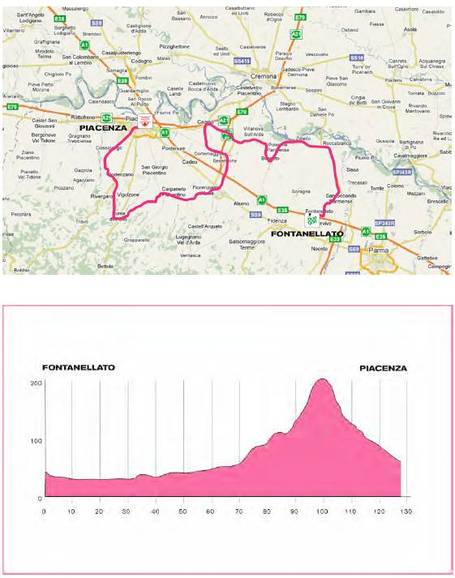