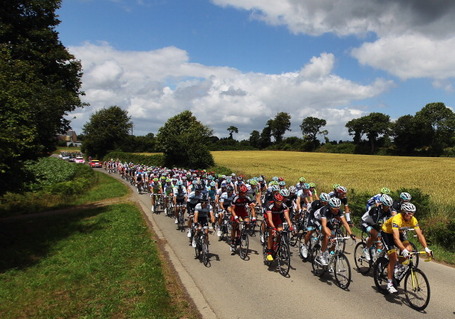 You ask? I write. Because that's how we roll here at Podium Cafe.

Tomorrow's Tour de France stage 6 runs 226.5 kilometers from Dinan to Lisieux. The Tour rolls into Normandy in the northwest corner of France and the terrain is all up and down. The course profile looks like someone tripped over the rug. Okay, 'fess up, which one of you klutzes did it? There are three categorized climbs on the menu and they're all of the short, steep persuasion. When the name starts with Côte, you know it's going to be short. That's the rule.

In addition to the bumpy terrain, the main characteristic of this stage is its length. Stage 6 is the longest stage of this year's Tour de France. At least they're getting it over with early is all we can really say about 225 kilometers of racing. That's a whole bunch of kilometers right there.

Uphill finish alert! The final categorized climb, the Côte du Billot, summits at around 30 kilometers to go, but there remain two uncategorized climbs still to race before the finish.  At 3 kilometres to go? You guessed it, there is another short climb.  It's looking like 90 meters of climbing in 2 kilometres of racing, if I'm reading the profile correctly - so about 4.5% average. The final kilometre is quite flat, which is a bit cruel after the long bumpy ride to get there.

For riders looking for mountains points, this stage is a nice one to head out for some breakaway time. The climbs aren't huge, but there are certainly some points on offer. There also is an intermediate sprint at kilometer 133 in Vassy. Garmin-Cervélo and HTC-Highroad have kept the race close for the points competition, but the terrain is not going to make it easy for them. We may see the break go out early and stay there for most of the stage.

The finish in Lisieux is made to order for the puncheurs, the riders who can jump hard on the short climbs. The sprinters could make it, but it won't come easily for them and there are plenty of riders who will be grinning at the sight of this finale. Thomas Voeckler made a late, though doomed attack, during Wednesday's stage 5. Thursday's finish suits the French rider's characteristics. This stage is also another chance for Philippe Gilbert, who never saw an uphill finish he didn't love. Gilbert also now wears the Green Jersey of points leader, after officials relegated Rojas and Boonen for dangerous sprinting during the intermediate sprint on Wednesday. Edvald Boasson Hagen also took an flyer in the finale on Wednesday, and should enjoy Thursday's finish.

Much depends, of course, on how much effort Garmin-Cervélo decides to put into defending Thor Hushovd's Yellow Jersey for another day, and how willing the sprinters' teams are to chase the intermediate points on offer. On paper, this stage looks like a classic breakaway stage, but with the Green and Yellow jerseys in play, the escape may prove short-lived. Either way, this profile says, fun day of racing. Here are the current race standings.