Tour De France: The Race To The Bottom

Share All sharing options for: Tour De France: The Race To The Bottom 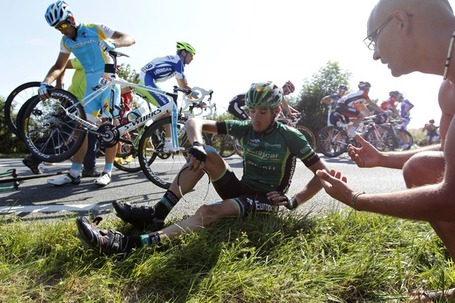 Once upon a time, the race for the lanterne rouge was a pretty straightforward affair: you simply lost a packet of time day after day and hey presto, you were the winner. Well, the loser. The winner at losing.

Then came the cut-off times and you had to make sure you only lost so much time, otherwise you'd be chucked off the race. Actually, briefly, the organisers did actually chuck the tail-end Charlie off the race, in a version of Devil Take The Hindmost, a custom I think ought be resurrected.

When you're riding at the back of the race day after day, there's a constant danger that one day the cut-off could catch you. Who knows what could happen: you could bonk, get a mechanical, or just get taken out by a spectator at an inopportune moment. So some days you need to make sure you're not the one at the back. But in order to retain your overall position in the race to the bottom, you'll need to have a cushion of time you can chew away at.

Which is where one of the secrets of the race for the lanterne rouge becomes apparent: lose time in the flat stages by finishing at the back of the peloton, and then once the road starts going upwards you can ride your own race, whether that's dawdling with the grupetto or riding a little off the back of the autobus.

This is why the first week of the Tour is so important in the race for the lanterne rouge. This is where the serious contenders will show their hand as they accumulate a cushion to carry them through the Pyrénées and the Alps. So even from the first stage, the race for the lanterne rouge is worth paying attention to. So let's look at what's been happening at the back of the race so far.

I was hoping that this year would see a repeat of 1989, when Pedro Delgado, having dodged a doping bullet at the previous year's Tour, started the race with the number one dossard and ended the first stage wearing the lanterne rouge. Unfortunately, while Bert did ship time in the opening stage, others shipped more and - in the grand scheme things in the race to the bottom - the Spaniard's losses were pretty inconsequential.

So what did actually happen at the back of the race? Well Jurgen van de Walle (Omega Pharma-Lotto) and Vincent Jérôme (Europcar) laid down their markers on the opening day, the former shedding 9'10", the latter shipping 12'02". Van de Walle is of course linked to Wim Vansevenant, the Omega VIP escort who was caught in possession of certain horse doping products. Vansevenant is of course a famous former multiple winner of the lanterne rouge, but hopefully isn't on hand to offer van de Walle any advice.

While only 1'22" separated the first team from the last in the stage 2 TTT, van de Walle added 2'41" to his deficit to bring him to 11'51" off yellow. He was outdone and overtaken by Radioshack's Dmitriy Muravyev, who added 5'12" to the 6'50" he'd lost on the opening stage, taking him to 12'02" overall. Having been the tail-end Charlie at the 2008 Vuelta a España, Muravyev is one to watch here. Meanwhile, although Jérôme added only another 1'09" to his deficit, bringing him to 13'11", it was still enough but retain his grip on the lanterne rouge.

As the race to the bottom heated up, so too did the difficulties of predicting its eventual outcome become clearer, with 2011 Tour's first abandon coming from one of the lanterne rouge contenders, van de Walle. This allowed Quickstep's Niki Terpstra to drop into third place in the race to the bottom, 19'52" off the pace. Muravyev and Jérôme rolled home together, thirty-two seconds behind the next-to-last finishers, bringing them to 25'10" and 27'53" off the pace. Out of the first four stages, Jérôme has so far managed to roll home last on all bar the TTT. Definitely a man to watch.

Another difficulty with following the race for the lanterne rouge is knowing who are the real contenders and who is featuring in the rankings just because of one off day. With Tom Boonen having a bad day at the races, Quickstep finished three of their riders in the last four, with Eddy Engles rolling in beside Tommeke, 13'08" off the front of the race, and dropping to second-from-last, 28'30" off the yellow jersey. Jérôme comfortably held onto his lead in the race, shipping 6'44" to take him to 33'57" off the lead. Somehow Muravyev committed the cardinal sin of actually finishing at the front of the race and losing no time at all. Clearly he's not taking this race seriously.

The pre-race fave for the lanterne rouge was defending champ loser Adriano Malora. By the end of the fifth stage he has manged to lose only 6'26". Still, there's mountains ahead and he could in theory close the gap to last place in just one stage and still beat the cut-off. But Jérôme does already look like a serious contender for the red lantern. The only question is: what's he like once the road starts going up?