And on we go with what has been, for as far back as I can remember it, the best designed Corsa Rosa. Ok there hasn’t been a lot for sprinters, but those early hilly stages gave us some decent time gaps between the real GC contenders and the rest, so made the peloton less nervous than it sometimes is about letting go the hopeless breakaway. But now it’s time to get things started. Stage 7 has been presented as the signature stage of this year’s Giro, but while we knew last year that the overall winner would almost certainly have to win on the Stelvio, this year no-one is sure how decisive this stage will be. Nor how it will play out.

There are three routes to the top of the Mortirolo: from Mazzo, which averages out at over 10% and reaches 18%, from Grosio, average 8% maximum 16%, and from Ebolo, average 7% maximum 10%. The Giro avoids the Mazzo route, the one you may know from the men’s Giro, and goes up from Ebolo before descending to Grosio. Of course the disadvantage of taking the shallower gradient is that it takes a lot more km to reach the top, in this case over 17km. How that climb will play out is reasonably predictable: They will break up into their climbing pairs, then Mara Abbott and Emma Pooley, the two best climbers by far, will head off together, followed by Judith Arndt and Tatiana Guderzo, then perhaps Marianne Vos and, well that’s I run out of prediction. But the descent to the finish line is one that is unfamiliar to most of us (Ok to all but one of us ). Emma Pooley is a notoriously poor descender, Mara Abbott better, but still ropey at times, while Vos is far better, as anyone who has watched stage 3 will know. This one’s going to be fun to watch.

The Mortirola pass. In cycling it is the temple of climbers, of fatigue, of sweat, and of strain. The Giro Donne grabs hold of the Alps with two hands, sending the athletes to one of the main climbs, which has raised to greatness champions, fans and cycling itself. From Rovato and from Franciacorto up to Valtellina, One hundred and twenty two kilometres directly North. It passes alongside the vine covered hills of the province of Brescia, following the eastern, Brescian, shore of Lago d'Iseo, then starts to climb back up the Valcamonica, the land of our ancestors and our prehistory, yet remains fixated on the frightening gradients of the Mortirolo. Breno, Malonno, and finally Edolo, after which the road narrows and begins to climb. The Giro Donne never ceases to astound. After Maloja, Bernina, Foscagno, and Stelvio in 2010, this year's challenge is the Mortirolo. This stage is for the climbers, particularly in the final part where strength and courage will make the difference. Whoever wins the Giro need not necessarily win this stage, but must arrive in front, among the first to reach the finish line in Grosotto, a typical Valtellina village, very dear to cycling. It is a sport from times past that the Giro Donne is making real, modern and in step with these times, but still respecting the tradition. Behind the leaders there may be large time gaps, but even so it may not prove to be the definitive stage for the Maglia Rosa. The road to Piemonte is still long. But whoever loses time on the Mortirola must look to stake their claim in next year's version of the Corsa Rosa. 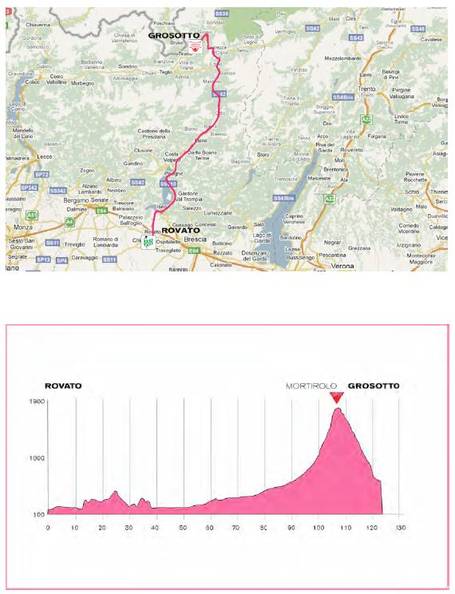