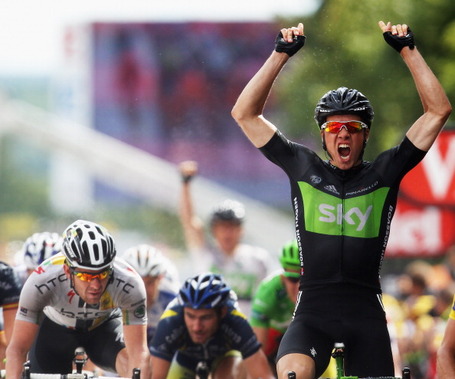 Edvald Boasson Hagen won today's stage 6 of the Tour de France in Lisieux. Sprinting in the rain, Boasson Hagen edged out Matthew Goss of HTC-Highroad. Yellow Jersey Thor Hushovd of Garmin-Cervélo finished third and continued his consistent racing at this year's Tour. Hushovd has finished in the top ten in every stage of the race so far. Despite the length and difficulty of the stage, the general classification remained mostly unchanged. Thor Hushovd still holds a 1 second lead ahead of Cadel Evans. Levi Leipheimer suffered a crash at 4 kilometers to race, and finished 1:04 down on the lead group.

Today's stage was the longest of the tour and this 227km jaunt was not a flat one - the route bumped up and down hill and dale in Normandy before finishing on a puncheur's finish. The final 3km held 1.3km at 6.4%, followed by 1.4km of false flat up and a flat final 400m. Paging Thor SMASH. The sprinters, they just can't catch a break this year can they? Anyway, as Gavia pointed out, whether a break would succeed depended on how willing the teams of stronger sprinters and puncheurs were to keep checks on it. Because 227km, that is a long time to chase.

With rain and a tailwind on the schedule, an optimistic quintet jumped away early in the race, hoping the conditions would dampen (literally) the efforts of chasers. Paging Jonny Hoogerland. (Yes, I wrote that before I saw who was in the break). The standard breakaway formula of 2 parts French teams (Roux - FDJ, Duque - Cofidis) and at least one part Vacansoleil (Hoogerland!, Westra) was adhered to. They even let Andriano Malori of Lampre join in for the "fun" too.

In contrast to the last few days, there were no intermediate sprint shenanegains. Cav won, Gilbert extended his lead on Rojas by a bit too. Consider Gilbert's objective stated. Too bad, I liked seeing the Belgian kit.

18km to go and it's just Malori and Westra left as the neutral service car is pulled out. Westra waves to the camera and says "that's enough sponsor time for today" but Malori, the Italian TT champion, pulls the obligatory jump again to steal the TV time from the peleton move. No handshakes between break-mates today. 13km to go and an FDJ rider tries to bridge to Malori. Guess who, it's Roux! Yes, the same Roux that spent most of the longest stage in the break. These Frenchies are nuts in July.

5km to go and Malori has 12 seconds, but that rise with 3km to go is going to sting. Leipheimer goes down and it's a tall order to chase back with Omega-Pharma Lotto driving it and HTC waiting in the wings with Goss at the back of the line.

2.5km to go and we're on the hill. Velits pulls for HTC, an Omega rider gives it gas and it looks like Contador wants to get across but can't  has bike issues. But you know who can get across? Voeckler! Unfortunately they're caught with 1300m to go.

Geraint Thomas gives Eddy Boss Hog a fantastic leadout and it's a close sprint but Boasson Hagen holds on in front of a fast-closing Goss and Hushovd! Leipheimer loses just over a minute on the day. 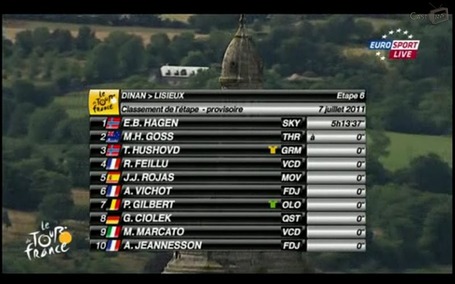 Thor SMASH in Yellow, Hoogie in the dots, Gilbert still in the Green after losing a point to Rojas in the finish, and Thomas still in white.

Here are the complete standings.