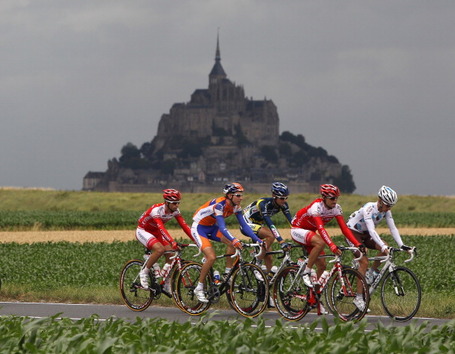 Friday's stage, which runs 218 kilometers from Le Mans to Châteauroux, is all about the sprinters. The Tour turns inland now after the past few stages on the coast and heads southeast. Destination? The Pyrénées. To get to the mountains, we have to cross the plains. This is a rule. Yes, there will be a test on the rules later.

The Green Jersey battle highlights tomorrow's stage. Maybe we should all wear Green in celebration? The final intermediate sprint comes in Buzançais at 35 kilometers to go. Yes, the race will come back together for this intermediate sprint, because none of the sprinters' teams will want to leave those points on the table. We can expect a hard chase to the sprint in Buzançais, a regroup for the sprint, a late break, and another chase. This pattern ensures that despite the flat terrain, it will almost certainly be a hard day of racing.

The Tour de France last visited Châteauroux in 2008, and Mark Cavendish won the stage. Ten years previously, Mario Cipollini won. I believe I see a pattern here. Châteauroux is the home town of Gérard Depardieu and boasts a château dating from the tenth century. What's in a name, anyway?

Here is your course profile.