Well it’s 89km according to RAI; 79.5 if you go by the roadbook and 70 if you take the words of the organisers as printed in the race guide. Yet in every case the map and profile are identical. The Giro likes to go on about how particular stages reward the bold, the brave, the fearless and so on, but she who reaps the greatest reward is the one who is best prepared. Dib-dob-dub. This stage begins with a few downhill kilometres from Teglio, before turning up which is just about the way it points all day. There is a small, properly categorised climb at Le Motte near Bormio, but that is just some 3km long at 8%. The meat of the day however is the finishing climb up to the twin Torri di Fraele, sitting atop 18 hairpins and marking the old route in to Switzerland. And as far as I can tell this is a brand new climb to cycling. The road up to the towers was gravel until five years ago, and the section from the summit to Lake Cancano still is. But being a newish road the gradients are quite shallow, so I can’t see Emma Pooley getting much if any of the time she needs to take the Maglia Rosa off Marianne Vos’ back. This race will run right to the very last day.

Valtellina and top level cycling have gone hand in hand for years. It’s like a stamp of approval for such a popular sport. After the Mortirolo comes another stage for the climbers, that could give another shake-up to the GC. Eighty kilometres entirely uphill, from Teglio, a few kilometres beyond Sondrio, capital of the valley, up to Valdidentro that you reach via the hairpins that circle skywards up the side of the mountain. Up there are the famous dams of Lake Cancano, and the Towers of Fraeli, symbols of the Alpine peaks. Without pausing for breath the stage begins with gentle gradients up to the passage of Tirano, then towards Grosio they become tougher and tougher. Yet as they rise then so too surely will rise the pace at the head of the race. Then, through Sondalo, Bormio and Valdisotto, between pine trees and a vista without end, the athletes will face steeper and steeper gradients right up to the finish line at Valdidentro and the Lakes of Cancano. The distance is not excessive, but it will doubtless weigh heavy after the fatigue of the Mortirolo and the lack of time to recuperate. And that’s not taking in to account the climbs due tomorrow, which will demand more recovery. This could be a stage where our expectations are deflated and the break takes it right from the start of the day, even if the natural hierarchy asserts itself as we climb up towards Valtellina. After the Mortirolo come further climbs and emotions for a Giro Donne that will act out its most important days in the fight for the Maglia Rosa. There could also be a grand struggle for the Maglia Verde, reserved for the best climber. It’s another prized symbol for a Giro once more dedicated to those who love the climbs. 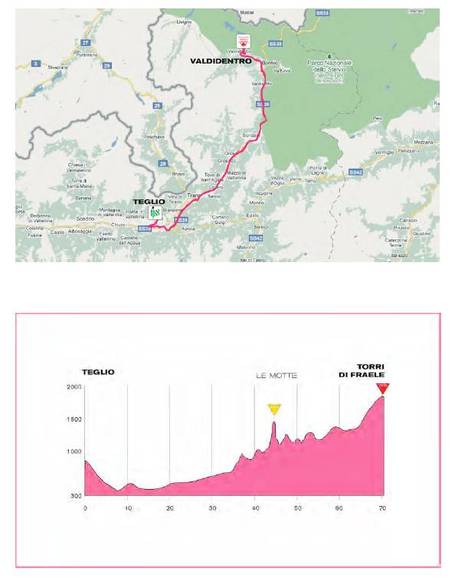 Map and Profile via www.girodonne.it