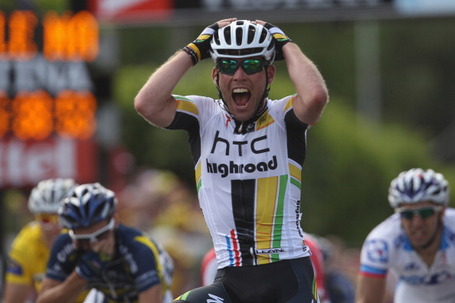 Mark Cavendish of HTC-Highroad won his second stage in the Tour de France today in the town of Châteauroux, where he celebrated his first ever stage win. Alessandro Petacchi of Lampre-ISD finished second, André Gripel of Lotto was third. Yellow Jersey Thor Hushovd of Garmin-Cervélo, meanwhile, successfully defended his race lead for another day. José Joaquim Rojas of Movistar wears the Green Jersey of Points leader, while Robert Gesink took over the lead in the Young Riders' Competition.

Several pre-race favorites, including Chris Horner and Levi Leipheimer of RadioShack, and Ryder Hesjedal of Garmin-Cervélo, were caught behind a crash with 30km to go. They finished 3 minutes behind the main field. The biggest victim of the crash was Bradley Wiggins of Team Sky, who was forced to abandon with a suspected broken collarbone.

Today was another long day at the Tour de France - 214km this time, which makes it the second longest stage in this year's Grand Boucle. That's a lot of time for a doomed break to ride alone, isn't it? At least the organizers were nice to the sprinters, not including a single categorized climb on the profile.

For more on how the stage unfolded, follow me below the jump!

Who wants to draw straws to be in the early break today? Contrary to some of the later, bumpy transition stages, the break was about as doomed to fail as it gets today. In case you need reminding, doomed breakaway = sponsor time for French teams. The others just can't be bothered on days like this, it seems. And so it was, with FDJ putting not one but two men in the break - Mickael Delage and Gianni Meersman. Representing the wildcard pick of Saur-Sojasun was Yannick Talabaron. The final man in the day-long move was Pablo Urtasun Perez of Euskatel. Token Spainard, check. Check that ratio, boys and girls - if one team manages to get two people in a 4-man move, it's a sure sign nobody really cares about the composition of the breakaway because it is D-O-O-M-E-D.

155km to go and they're talking to Gilbert on Eurosport. Managed to show the clip where the kid asks Griepel for his autograph, thinking he's actually Gilbert, too. Ouch, that has to sting for the Gorilla. Gilbert says it's Griepel's time to go play with the sprinters today, but I have a hard time seeing Fast Phil completely sitting this one out because he's in green. If you're watching this early in the stage, prep yourself for a lot more of this type of discussion. And now you can see what Vino had for breakfast! Evidently it was an omlete with chese, tomatoes, etc. today. Then some bananas for "quick sugars."  Also, pour yourself some vino, it's going to be a long day.

Okay, time for me to go to class. Nothing to see, they aren't even showing the bike racing yet. That's when you know it's a stage with a foregone conclusion.

55km to go. Yesterday Garmin complained about the other teams not helping set the pace and bring back the breakaways. Funny, that's what they did to HTC the last few years. What goes around comes around, boys. Right now it's HTC putting two on the front to help out Garmin. Vaughters must have made some sort of agreement with HTC - maybe Millar is going to lead out Cav's train again?

53km to go and they are going slower than the slowest expected time schedule today. I hear there's a block headwind. Bummer, dudes. Close-up of Thor, Andy, and Stuey. They all look bored as can be.

43km to go. It's so cute when the commentators point out the break has pulled 10 seconds more out of the bunch. Still doomed, dudes. Gap is 2:46. Kreuzinger chasing back on after a crash. Speaking of crashes, looks like Boonen abandoned earlier in the stage.

38km to go. Big crash. Cioleck, Steegmans, EBH, Coppel, Wiggins, Farrar, Horner, Uran all caught up in it. Wiggins is in a bad way, holding onto his left elbow and not getting back on the bike. Horner is in the ditch for a long time too. Leipheimer and Vino caught behind the crash, chasing back on a long ways behind the bunch. Will have to check post-stage to see all those who lost time. Not likely they'll make it back on with the intermediate sprint coming up soon and sprinters teams keeping the pressure on.

25km to go and Delage takes the intermediate sprint from the break, though it wasn't contested. In the Bunch, Cav takes it over Rojas, Renshaw, and Gilbert. Nobody else tries, though it didn't look like the big dudes were going 100% either. Renshaw does a good job of keeping Gilbert from getting more points. Leadout for the sprint really ate into the break's advantage, they have 56 seconds now.

14km left and the break has 10 seconds. Delage decides he wants the Most Aggressive Rider number tomorrow and attacks. They're on him again though. Perez counters. Looks like we have a fight for the red number on our hands here.

5.5km to go and Leipheimer punctures out of the second peleton, which is already way down and stretched out into a "pain line". Dude has zero luck this year, perhaps even negative luck.

3.7km to go. Cadel Evans is better at following sprinters' wheels than Griepel and a few others are. Farrar is in the second group, so he won't be in the sprint.

Griepel jumps early on the right side of the road, but Cav accelerates up the left hand side and takes it. Petacchi is on Cav's wheel but just can't come around. A bit scrappy in the final km behind the HTC train. Second peleton comes in 3:05 down with Horner, Levi, Hesjedal, and others. 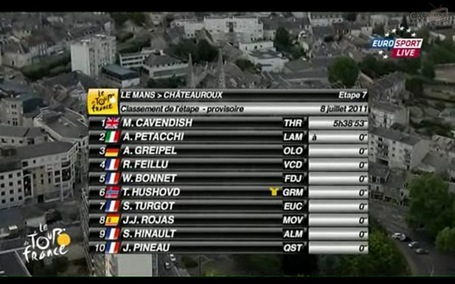