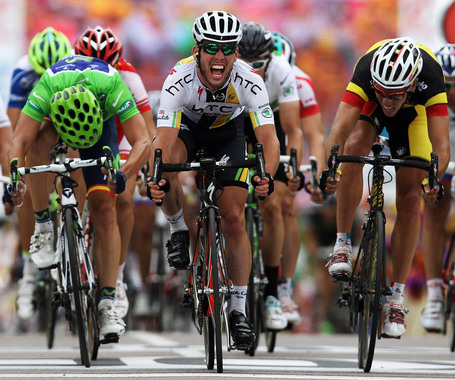 Well, we knew it would be intriguing. And we pretty much knew it would look something like this: a two-track battle between the all-round specialists and the fast finishers. Who it favors is debatable, but we also knew things would be unlike past years, and that is surely something we can all agree on. A few overall notes of interest, then a power poll...

Some parameters first... This is both a poll on where things stand and where I predict they're going. I may like X better but if he's 45 points back, that's a problem. And I respect the standings, but sticking to them alone is boring. Coming up:

Troubling that the Belgian press is mostly concerned about whether or not OPL are still functioning as a team, but Gilbert made nice with the Gorilla today, helping him in the finale. Anyway, with only two more Greipel stages, Gilbert likely resumes his chase for green and gets the lion's share of opportunities. As hard as it is to pick between the competing approaches to winning... if they get real and give up on beating Cav so Gilbert can sprint and pad his points resume with top fives on the easy days, then I don't have to choose. Phast Phil can climb and sprint, so the competition is his to lose.

Hm, tough call between him and JJ here. The current spread represents one more Cav win with JJ 3rd or 4th, so it isn't much. It also represents less than one day when Cav missed out on a sprint and JJ didn't. The Manx Missile is the most dependable finisher, seems to have adjusted to the intermediate sprints, and has the best teamwork in front of him. So I'll go with that.

Consistency is very nice, which is why Rojas is in green today. But what's more likely, that he wins a stage, or that he continues to get points every day, or that he -- like everyone else -- gets in a bind and misses points? If the latter happens even once, I think Cav gets him.

I originally pinpointed tomorrow as Thor's big day, likening it to the Barcelona stage of 2009. We shall see, but until that day is over I am not buying his "I'm not into green" thing.

Hm, 98 points for a climber? If they used the same points scale in the mountains (45 to the winner), Evans would have a real chance at this. Hell, he does anyway.

Unlike Thor, I do get what they're doing with Tyler. Face it, Thor is gone after this year, so the strategy of splitting points -- a sure-fire loser -- is a temporary headache. But Farrar was never likely for green this year, not til he bagged a stage or three. Next year we may see what he can do as a points contender... provided he works on consistent positioning too.

Like Farrar, the Gorilla is really just a stage-hunter. It's his first Tour, you don't win green til you've been round the country a few times.

The Pinball Wizard has made a bit more of an impact than he -- or at least his rivals -- might prefer. Let's hope it doesn't get worse.

Time to make lemonade, Sky. Show them who's Boss.

Do we know yet why he got relegated today? Not that my Editors' League team will ever be relevant, but still.