And still the contest for pink continues. Marianne Vos may have a lead of two and a half minutes, but she could all too easily lose that all on the final mountain stage of this year’s Giro Donne. Jens Zemske, ex Nurnberger and Cervelo DS, who is in the HTC car this year said "I fear most of all the arrival at Ceresole Reale, because the length of the climb is particularly notable, and especially the final slope. There we should have huge gaps, and perhaps even unforeseen blow-outs." (actually he probably said something far more coherent, but I can only find the Italian translation). And if that sounds nasty then here’s what Sharon Laws learned on her recce: "With 3km in a tunnel the gradient is deceptive and it was only on the descent that I realised quite how steep it was! At first we didn’t think the race could go through the tunnel but investigating the only other option around the tunnel we found it was more akin to a mountain bike trail, probably unsuitable for a peloton of 150, so we reluctantly returned to ride in the dark for 20 minutes or so." This is fairly virgin territory for any sort of Giro d’Italia. The men finished a stage here back in 1976 (Varazze – Ozegna won by Belgian Rik van Linden), but that’s about it. Although the local villages give a not too subtle hints as to which way they are betting. If you want the tourist guide, then local TV station Orso TV currently has a long video report up accompanying some Colavita riders on their recce (sadly I can’t see any way to link to it directly – you may have to scroll down the menu on the right – though oddly enough you can link directly to the Marmotte Report ). And breathe it lightly, but this area is also known as the Kingdom of the Stambecco.

In a Giro Donne which celebrates the the unity of Italy and its one hundred and fifty years, it is impossible to omit Piemonte, land of the forerunner of a united Italy, but also a territory with a deep sporting culture. The penultimate stage of the Giro will be the real watershed of the Corsa Rosa. Perfectly designed from every point of view, Aglie – Ceresole Reale can clarify definitively where the strength of the group lies, at least from an athletic aspect. And should the Giro Donne, despite the Lombardy climbs of Valtellina and the nervous early stages packed with emotion, still not have been definitively won or lost, then you can certainly trust that almost one hundred and fifteen kilometres up high, in the summit of Ceresole Reale, in the heart of the Gran Paradiso National Park, will. Once more nature, sport and cycling unite in a single common purpose. Early climbs and descents in a short circuit precede an intermediate passage in the first few kilometres through Aglie which also hosts the departure and its associated ceremonies. Then soon after the short ascent of Prascorsano, after passing through the town of Cuorgnè, the race gets serious. It climbs with determination and no respite up to Rosona, some twenty kilometres. Then suddenly the gradient changes, and after the small village of Noasca it becomes even more demanding. The last kilometres in fact reach fourteen percent in places just before the arrival at Ceresole Reale. It will be the last real climb of the Giro Donne, and it could be the straw that tips the balance of the race. But even if turns out that the game has already been won, the finish line will be for sure much coveted by those who want to leave their mark on the corsa rosa. In the unpolluted landscape of the Alps, the winner will have the right to smile after conquering such a demanding climb. 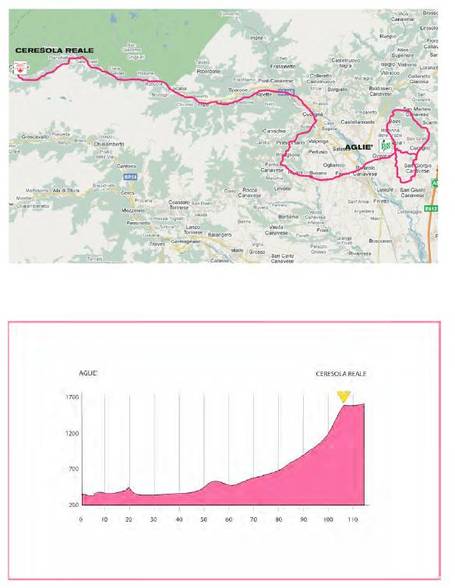