Tour Stage 8: Rui Costa Is Back!

Share All sharing options for: Tour Stage 8: Rui Costa Is Back! 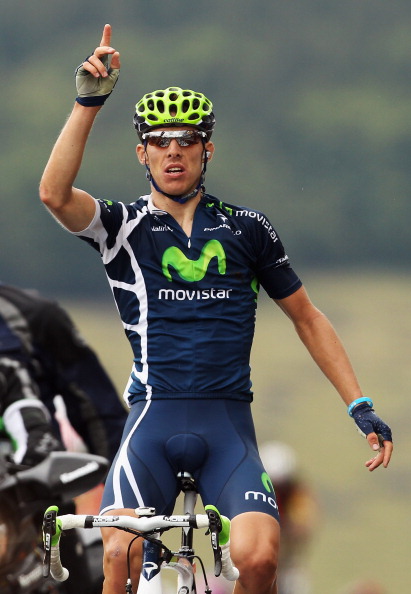 Rui Alberto Faria Costa of Movistar soloed home to the finest victory of his young career, winning the Tour de France's 8th stage to the Massif Centrale ski resort of Super-Besse. Costa, surviving from  an early breakaway, saved enough energy in his legs to escape for good at the bottom of the day's final climb, and was never reeled in as he flew up the last 2km with chasers in sight. This caps off a remarkable 12 months in which he was attacked by a fellow rider after a Tour stage last year and was suspended for doping only to have the suspension lifted when he successfully proved that the source was a contaminated vitamin supplement. The victory is his second major result since returning to racing in April -- he won the Vuelta a la Communidad de Madrid --  and his first-ever major result at the Tour.

The early break was reeled in on the day's highest ascent, the Col de la Croix Saint-Robert, and Tejay Van Garderen of HTC and Costa launched the opening attack, with Astana's Paolo Tiralongo forming a chase with teammate Alexandre Vinokourov and Juan Flecha. Robert Gesink fell out from the main group, still suffering from crash effects, then rejoined before fading again later. Christophe Riblon and Cyrille Gautier joined the leaders prior to the final climb, with Vino chasing, while BMC paced the peloton to within a minute. Throughout, the gaps were small enough for the final climb to Super-Besse to decide the stage. And it did.

Riblon fell off immediately, and Gautier was dropped seconds later as Rui Costa and Van Garderen surged with 5.5km to go. Vinokourov dropped his fellow chasers and passed Van Garderen with only Rui Costa ahead at the final ascent. But the Portuguese starlet ground on steadily, and the peloton shifted into high gear, bringing the gap down to manageable amounts. Alberto Contador and Andy Schleck patrolled the front while Philippe Gilbert attacked for points, then Damiano Cunego, then Cadel Evans. Cunego was swallowed up, as was Vinokourov, ending his yellow ambitions for the day. Gilbert stayed away for second and Evans led home the petit peloton, including, incredibly, maillot jaune Thor Hushovd.

One side note: Johnny Hoogerland, in spots, attacked on the penultimate climb for fourth place on KOM points, which are awarded to the first three. So officially a pointless attack. Hooray! Oh, and Gilbert's result got him back in green. Results:

First-ever Portuguese stage win?? First in a while at least.