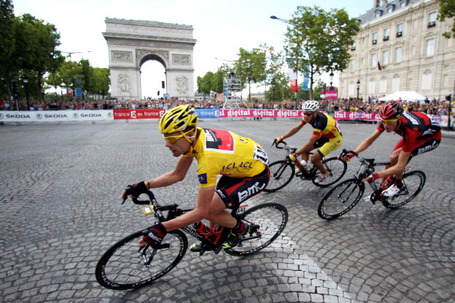 BMC Racing Team confirmed Monday morning that 2011 Tour de France champion Cadel Evans and former U.S. National Champion George Hincapie have renewed their contracts with the California-based team. Evans has committed for the long-term and will race for BMC Racing Team until 2014. "From the start, I have always felt the BMC Racing Team has had a lot of confidence in me as a member and often as a leader of the team. So a longer term contract echoes this. I look forward to the years ahead," said Evans. The team also confirmed that Evans will race the upcoming USA Pro Cycling Challenge in Colorado. It will be the final race of the season for the Australian.

Hincapie, meanwhile, has renewed his contract for one year. The experienced American recently tied Joop Zoetemelk's record with 16 appearances at the Tour de France, and will race his 19th professional season next year. Earlier this season, he narrowly missed winning his fourth career U.S. national title. "I'm really excited to continue the success of the team. My two years with the BMC Racing Team have been even better than my expectations," Hincapie commented.

"Having these two return to the BMC Racing Team next year allows for our continued growth by having our two captains stay on board to provide leadership and mentoring to others in our organization," Team President Jim Ochowicz said.