Share All sharing options for: Quick Step + Omega Pharma: Together At Last (Again) 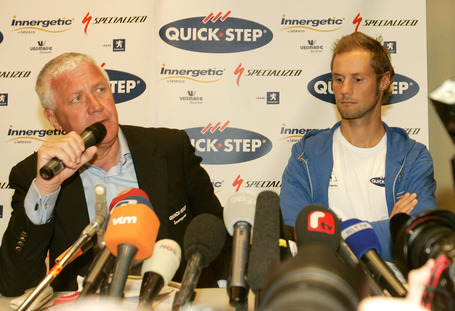 Happy Transfer Announcement Day! Yes, it's August 1, the day when months of cloak-and-dagger negotiations and agreements whispered around dark corners are thrown willingly into the light of day (as opposed to unwillingly, by Het Laatste News headlines). For all the details we know so far, start at our Transfer Megathread.

But the doings in Belgium today are of a different sort. Today the leaders of the Quick Step and Omega Pharma-Lotto teams have announced a merger which will produce the Team Omega Pharma-Quick Step Belgian supersquad for 2012. [Lotto, which have sponsored a top level team since the 14th century, are splitting off to make their own outfit.] OPL's Marc Coucke and Quick Step's Patrick Lefevre both sang the praises of this merger, which is primarily a reallocation of sponsorship dollars and management. Omega Pharma, the pharmaceutical company, has pledged two years of sponsorship. Quick Step have three remaining, and Innergetic are on board for 2012. This isn't entirely new news, as Omega Pharma (owners of Davitamon) and Quick Step sponsored the Quick Step-Davitamon team in 2003-04. As for the management, it will be interesting to see who goes where. Coucke has Marc Sergeant running OPL and Lefevre has guys like Willfried Peeters and Tom Steels on hand. Maybe they mostly stay.

What it means for the roster is in complete flux. It's probably pretty safe to say that anyone under contract with Lefevre for next season is going to be offered a spot, with the exception of some guys whose performance and contract allow the squad to drop them. Mergers are a form of contraction, after all. Anyone cut loose will probably get a look at the new Lotto team, where they would be able to rejoin Jurgen Van Den Broeck, Jurgen Roelands and Jelle Vanendert. Tom Boonen is the big name at OPQS, Andre Greipel would be a welcomed addition, and after that... stay tuned.

I can think of two possible specific motivations behind this merger. First and foremost, Philippe Gilbert has not announced where he is signing on for next year. Maybe it's all settled but if not, this merged squad can present a better offer of cash and support than the existing teams could on their own. Secondly, the UCI World Tour points system rewards big teams who can throw point-winners at a lot of races. Quick Step has struggled to garner points outside of the classics, but the merged team might be able to bring in a wider range and higher class of guys. It's sad to think that Belgium cannot sponsor more than one team which is able to operate at the highest level under the current UCI system, but that appears to be the reality for now.