Need For The Bike, by Paul Fournel

Share All sharing options for: Need For The Bike, by Paul Fournel 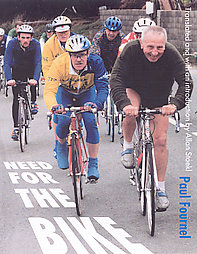 Title: Need For The Bike
Author: Paul Fournel (trans by Allan Stoekl)
Publisher: University of Nebraska Press
Year: 2001 (trans 2003)
Pages: 150
Order: University of Nebraska Press
What it is: A series of autobiographical and observational essays that collectively capture some of the magic and charm of cycling.
Strengths: Fournel writes with a poetic compactness and a wry, light touch about topics that make perfect sense to most cyclists.
Weaknesses: Brevity.

While I'm trying to work out what I'm supposed to say about Paul Fournel's Need For The Bike here's a bit from Allan Stoekl, in his translator's introduction:

"Paul Fournel's Need For The Bike is like no other work on cycling that I know. It's not a technical manual, not a hagiography of a few racers. The focus is not on the machinery nor on heroes whose very virtue is that they cannot be emulated. Instead Fournel presents a world, a very personal one, whose axis is the bicycle. It's a world of communication, of connection, where all people and things pass by way of the bike."

Sights sounds smells are recalled as geography unlocks memory ("To be in the landscape, in its heat, its rain, its wind, is to see with different eyes; it's to impregnate oneself with it in an instinctive and profound way."). A point Fournel makes about geography is that it reveals not just itself, but also the rider. Here he is on the Ventoux:

"The Ventoux has no it-self. It's the greatest revelation of your-self. It simply feeds back your fatigue and fear. It has total knowledge of the shape you're in, your capacity for cycling happiness, and for happiness in general. It's yourself you're climbing. If you don't want to know, stay at the bottom."

To give you an idea of the book's scope, perhaps a look at its table of contents will help:

One thing giving you that table of contents says about Need For The Bike is that Fournel squeezes quite a lot into a small space. The longest piece in the book runs about five pages, the shortest barely forty words. Its bite-sized chapters make it the ideal book to nibble away at. 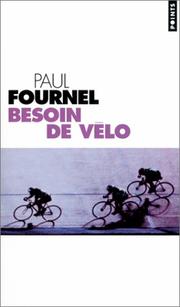 Fournel's original text - Besoin de Vélo - ran about seventy-five pages longer than Stoekl's translation. The difference between the two books is explained up by an appendix, Sur le Tour de France 1996, which has been omitted from the English-language edition. This exclusion at first seems like a bad idea. Once you get a taste for Fournel's writing you want more. And so you regret the decision to exclude anything from the translation.

But once you step back a bit you can also see why such a choice might have been made. Think of Need For The Bike as a tented village. Tacking a seventy-five page essay on at the end of it would be like throwing up a multi-story car-park in the next field over.

What else does that table of contents tell us? Well it gives some clue as to the book's specific contents. Some of the subjects are obvious from their titles. Biker's Tan, for instance, is about "the ultimate outfit of the cyclist, the suit he wears when he's given up everything else, his tattoo, his tan." More, it's about the impossibility of a cyclist remaining incognito on the beach or in the pool.

Double Bass you'd have a harder time trying to pin down from its title alone and it's only in the last line of the essay - the punch-line - that the meaning of the title is revealed.

Should one say that a semi-philosophical essay has a punch-line? Hmmnnn ... no idea. But the idea of a punch-line somehow seems to be appropriate when considering Fournel's essays. They're not laugh out loud funny and I don't think there's a single 'joke' in the whole book. But there's something in the way that Fournel looks at the world - looks at himself - that had me smiling most of the time I was reading the book. Take, for instance, the book's shortest piece, Maniac:

"A little while ago I noticed that for thirty years I had been happily mounting my bike by raising my right leg and passing it over the saddle.

Since then I do it the right leg over, then the left."

Ok, so maybe sharing that one with you wasn't such a bright idea. Maybe you just had to be there when I read it. Let's try this bit instead. This time Fournel is recalling an early crash, the first time a car door was opened in front of him. The driver is trying to put things to rights:

"First and foremost she wanted to make sure that nothing was broken; she seemed to be trying to count my bones, one by one. 'I didn't do it on purpose,' she assured me, and I was perfectly convinced of this because I could think of a thousand other, more efficient, methods you could use to kill your small neighbours."

I guess the point is that, while Fournel takes cycling pretty damn seriously he has the wit so see absurdities when they're staring him in the face. Cyclists are ridiculous, and Fournel has sense enough to ridicule us, even when that means he's ridiculing himself.

One of the more enjoyable aspects of Need For The Bike is how Fournel's reminiscences set you off an exploration of your own cycling memories. Fournel talks of maps ("Road maps are for me dream machines. I like to read them as if they're adventure stories.") and I wanted to put the book down and take from my shelf one of the maps there and re-read the book of my own cycling memories.

Or he talks of being forced off his bike by living in Cairo ("I just don't see where I could slip a bike into this city, nor do I see, between the overburdened valley of the Nile and the deserted desert tracks, any shady countryside I could explore.") and I recalled my own experience of riding through Cairo, or the Nile-side roads we pedalled along as we headed south to Luxor.

It's an odd way to recommend a book - 'It kept making me want to put it down! Here, try it yourself!' - but Need For A Bike is just that, an odd little book. The simple act of causing the reader to recall their own cycling experiences though doesn't really explain what makes Need For The Bike work the way it does. If it was as simple as that then Charlie Woods' Bikie: A Love Affair With The Racing Bicycle would be a work of art instead of a self-indulgent steaming heap of dung. So what is it that makes Need For The Bike so good? Here perhaps Fournel's background needs to be considered.

Fournel has been the cultural attaché in Cario and London as well as being involved with Alliance Française in San Francisco. More importantly – perhaps, or perhaps not - he is a member of the avant-garde writing group, Oulipo (l'Ouvroir de Littérature Potentielle, the workshop for potential literature). The basic idea of the Oulipo movement is to create formal constraints or rules within which an author has to work. George Perec's novel A Void is a good example: the constraint employed there being that Perec couldn't use the letter e. Or perhaps you're familiar with Italo Calvino's If On A Winter's Night. What you really need to have looked at is Raymond Queneau's A Hundred Thousand Million Poems. Fortunately, posterity has forgotten most of the movement's less successful works. Those successful books do give you an idea as to Fournel's true peers.

If the notion of avant-garde writing-groups sends shivers down you spine and has scared you off Fournel, then fear not, Need For The Bike is not actually an Oulipo text. Fournel has not acknowledged any formal rules or constraints he imposed upon himself in its creation. It is tempting though to credit Fournel's Oulipo experience with a role in crafting such compact prose, and weaving together a collection of essays which are linked – subtly – one to the next.

Allan Stoekl says that Need For The Bike is "like no other work on cycling that I know." But there is one book that Fournel's series of essays comes very close to: Tim Krabbé's The Rider. The two are not the same, don't get me wrong, but at the core of each is the notion of 'things we think about when we think about cycling.' The two complement each other.

At their hearts, both are books by cyclists, for cyclists. They talk about things cyclists talk about in a language cyclists use. And they somehow do this without seeming exclusive, without seeming to shut-out non-cyclists. For those of you struggling to explain to others what it is about cycling that so fires your fuse, Need For The Bike is one of a handful of books which you should consider gifting to those who just don't get what it is you get out of life on two-wheels. But make sure to read it yourself first. You'll be well rewarded for the time you give it.