Dueling Egos at BMC Next Year?

Share All sharing options for: Dueling Egos at BMC Next Year? 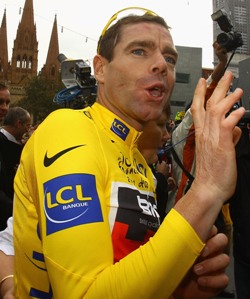 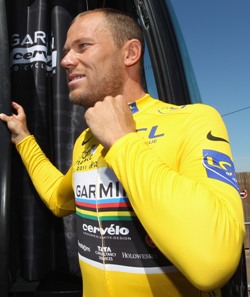 Um, no thanks Cadel.

Uh oh, what have BMC gotten themselves into? All over the news are reports from Cadel Evans' chat with reporters in Melbourne, where amidst his maillot jaune homecoming Evans responded to the signing by BMC of World Champion Thor Hushovd that he didn't care to share leadership of the Tour de France squad next year, with a sprinter or anyone else. The money quote:

"Thor comes to the team on the understanding that to win the Tour everyone has to be dedicated to the cause (of Evans winning)."

This is not an entirely unreasonable position for Evans to take. Yes, he's become notorious for fussing a lot at his teammates' expense in the Tour, but winning stamps his technique with validation, as nobody can deny the significance of Evans' extremely tidy first two weeks of this year's Grand Boucle.

The problem is, he doesn't sound very welcoming of Hushovd. Who, it might be noted again, is the reigning World Champion, and also one of the most decorated riders in the sport at present. My hunch is that all parties will downplay things, and if BMC can rephrase the master plan a little better (Thor for the Classics, Cadel for the Tour), maybe everyone will leave it be, including the two alpha dogs themselves. Ultimately this is unlikely to be a clash of words... but what about roles?

Hushovd is no rainbow-clad wallflower, and has spoken pretty bluntly about his ambitions regarding his time at Garmin. He wants to win Paris-Roubaix, and wants a team that will support him before, during and after the race. [Hincapie: "Ahem!"] Easier said than done, but thankfully Thor's Tour exploits have more than made up for the elusiveness of that spring goal. In fact, in this humble scribe's opinion, winning Tour stages is Hushovd's primary talent, not Paris-Roubaix, so when that Holy Grail doesn't fall in his lap, yet again, will we see Hushovd on the rampage in the first week or so of the 2012 Tour?

It'd be a shame if Evans' fastidious nature deprived us of this sight. It's impressive. And also a pretty valuable commodity. Whatever Jim Ochowicz said to Cadel about bringing on Hushovd (probably a good idea, see earlier, lengthy discussions), they now have some six months or so to convince Cadel that letting Thor off the leash in France is compatible with the team goals. After dropping a rumored seven figures on the Norwegian arc-en-ciel, it's pretty hard to imagine BMC agreeing with Evans' assessment in the end. But then again, Hushovd has twice now, in about a year, signed with teams whose returning riders might not all be down with the everyone-for-Thor plan. So he can't complain too loudly if he wakes up in France next July with a collar on his neck.

Anyway, for now no public displays of affection between the two are planned. That's a job for winter camps.