Share All sharing options for: Vuelta a España '11: Carrots Got Enough Juice? 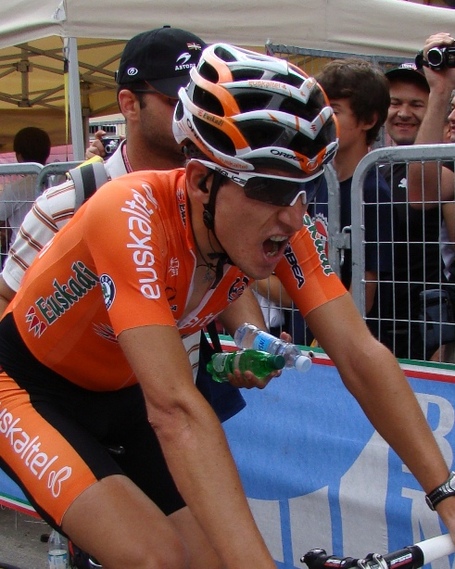 There are a lot of stories in any grand tour, and I often start by trying to conjure up a list of 22 of them. But sometimes one team's story looms over the rest, over the entire race. With all due respect to Vincenzo Nibali, Denis Menchov, the High Road swan song, and all the guys tuning up their sprint for Copenhagen, this race is the March of the Carrots.

Thirty three years ago the Vuelta a España arrived in San Sebastian to conclude a race reeling not just from the attacks of an audacious young Frenchman in search of his first great success, but from something more sinister. Sure, to the cycling fans, Bernard Hinault's assault on the peloton which netted him five stages and the overall win was riveting stuff, but on the ground conditions deteriorated as Basque fans grew increasingly agitated at a symbol of Spanish unification, even one wrapped in a bike race. For days they tried to disrupt the Vuelta, throwing tacks on the road, and so forth, as the race wound around from Bilbao to Amurrio to San Sebastian. The last stage was canceled when separatists started lighting tires on fire. The separatists wanted nothing to do with Spain, and succeeded on this one front, as for the next three decades the Vuelta wanted nothing to do with Euskadi.

This year the race comes back to the Basque country. I can't pretend to summarize how either side feels about it, but from here it looks like a pretty big f&^king deal. When the peloton rolls into Mercadillo in the Basque province of Bizkaya, around km 60 of stage 19, when the biggest race in Spain enters the homeland of cycling's most legendary fans, the Vuelta will turn the page on a major chapter in its history. And it would be pretty cool if a Basque rider from the Basque government-sponsored team Euskaltel were leading the race. Except that's a lot more than a cute story. From a pure cycling perspective, it's how it oughta be.

A year ago, the Vuelta turned uphill to Andorra, the highest point thus far in the race, and it was Euskaltel's Igor Anton who shone brightest. Winning his second stage of the race, the product of Galdakao in Bizkaya beat the mountain goats at their own game, and looked like he could put enough time into Nibali to minimize his risk in the long Penafiel time trial. As Anton pulled on the red leader's jersey, I remember thinking the race was firmly in his grasp. We all know what happened next: the busted elbow that sent Anton home; the shocking ability of Nibali to absorb the vicious blows dealt by Zeke Mosquera and Joaquim Rodriguez. Anton didn't write that final chapter, and he's still a guy whose highest grand tour finish is 8th, in the 2007 Vuelta. Maybe he can't deliver the goods. But last time I saw him I didn't harbor any doubts. He'd smashed them in Andorra.

Euskaltel is bringing the deepest team in the race, hands down. Yes, Geox look pretty good, Katusha will support Rodriguez. Jurgen Van Den Broeck will have Bakelants, Sky will revive Wiggins with Lofkvist, and Radio Shack will get the band back together again with Kloden and Brajkovic heading up an all-GC squad. But those bigger names are all guys coming off Tour crashouts, guys whose form hasn't been carefully nurtured for this race. Anton's has, and same goes for Mikel Nieve and Inaki Isasi. Add in the Tour squad -- Amets Txurruka, Gorka Verdugo, Egoi Martinez -- and you have one beefy bunch of carrots.

Looking at the competition, it's easy to imagine any number of outcomes in a truly grueling Vuelta, but at the risk of oversimplifying, consider the history of Anton's challengers on climbs like the Angliru, the ascent that will loom over the Vuelta until the peloton finally put it behind themselves in stage 15. Anton himself was set to challenge Alberto Contador the last time the Vuelta visited this Asturian beast, but Igor crashed out of the race in the intermediate sprint. Not good. But Andreas Kloden -- three years younger then -- finished 44th, ten minutes down. Jani Brajkovic has no history on the Angliru, nor does Menchov, who suffers on the ultra-steeps. Only Rodriguez (3rd in 2008) has a demonstrated history of success here.  With five other mountaintop finishes and only a single individual time trial, Rodriguez might be Anton's biggest rival. Well, apart from Nibali, who doesn't look like a natural for the route, but after last year I'll believe just about anything when it comes to the Shark. Er, second-biggest. Nibali's survival on the Bola del Mundo was a decent indicator of his ability to suffer up the worst slopes, and he placed third on Monte Zoncolan in this year's Giro. Anton will have to watch the Shark carefully. Still, Anton has a big team advantage there.

Euskaltel have never won a grand tour. A victory in this race would be poetic justice -- not merely the Hollywood variety but the right result for a team that should have broken the duck a year ago. Maybe the Cycling Gods weren't being cruel when they slipped Anton's tire out that day. Maybe, in their own wisdom, they were setting a bigger stage.