The Next Jens! Or, Time to Construct a New Cult

Share All sharing options for: The Next Jens! Or, Time to Construct a New Cult 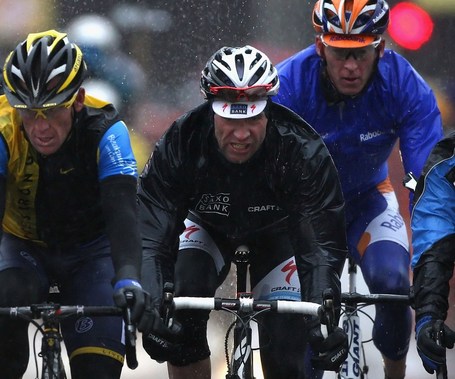 There is a sidebar item on Bicycling.com's Cult of Jens videos, and you can go watch them there, I am sure they're full of awesome. But it did make me think, poor Jens, the guy can't go a day without someone wanting to record him acting like, well, Jens. It probably gets tiresome for him, and it may be a little late in the game for some of you too. I mean, that's how cults work, right? We added the exclamation point to Jens!'s name in 2006. If a cult leader hasn't asked you do rob a bank or drink something fishy after two years, it's probably time to move on to the next one.

I've also grown a tad uncomfortable with the continued Jens! worship, since what makes him so awesome his way doing things that have long characterized the sport. Yes, he does them with a German-accented word salad that drenches the whole thing in charm, and I will never forget "if Five Astana's get attacked by a bear and they're out and we're just [inhale] go easy to Paris." And yes, Jens! at his best came with a love for the suffering that was more powerful than any banned substance. In fact, if you juiced up the guy, he could probably win all three grand tours, as long as you ran all 63 stages consecutively with no rest days.

But all good things must come to an end, and someday Jens! will probably retire. With six kids at home, eventually his wife will threaten to kill him if he suggests spending another year on the road. More importantly though, Jens! has never had a monopoly on awesomeness, love of cycling, embodiment of the suffering, or sense of humor. It's always been a tad unfair to celebrate Jens! for these traits when most guys at the top level exhibit at least some of the above, and some guys are no doubt right up there with Voigt.

The question is, who? Well, not who is the next Jens, but who would you put on your pantheon of cycling awesome, for reasons resembling the Cult of Jens!? I'm not exactly sure how to define it, and I'm not even sure who to nominate, though I'd probably start by looking up the names of all the guys who finished all three grand tours in a year, probably some material there. Oh, and Sylvester Szmyd, he's a shoo-in. First ballot guy. Who else?