Vuelta Stage 5: Katusha Get It Right

Share All sharing options for: Vuelta Stage 5: Katusha Get It Right 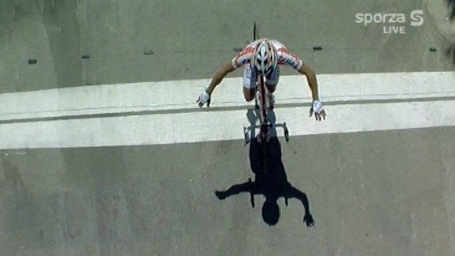 Joaquim Rodriguez knew today's fifth stage of the Vuelta a España had his name on it. The modest slog to Valdepeñas de Jaen involved a late climb, enough to shake loose the flatlanders, and a ridiculous 27% ramp 500 meters from the finish. This was a sprint stage for guys who can sprint up absurd gradients. If the Katusha man has one specialty, that's it. And for once, his team nailed it. With their entire squad on the front of the race in the final hour, the maligned and often invisible Russian rockets drove the pace, kept the race under control, and dropped Rodriguez off at the bottom of the final ramp where he rocketed away to victory, barely challenged. For their troubles, Dani Moreno -- JRod's top domestique and yesterday's stage winner -- took third, giving the team a fantastic start to the Vuelta. Lots of small changes on GC, and one big one: Igor Anton dropped close to another minute, making him look less and less like a contender. Results: