Share All sharing options for: SebWatch: A 2011 Grand Tour Odyssey 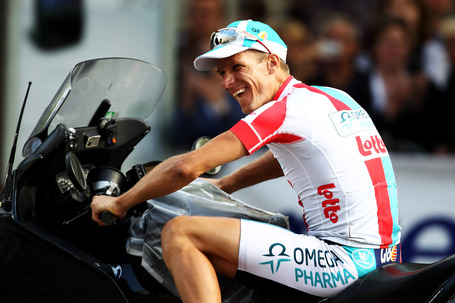 Picked up while reading IrishPeloton (you can learn a lot this way, FYI):

With this in mind, I am kicking off SebWatch, a daily tracking of the progress toward Madrid of Omega Pharma's Sebastian Lang. Today, Lang finished 64th, just over six minutes down, though comfortably ahead of the gruppetto, or cabezita, or whatever they call it in Spain. Seb lies 94th overall, 31 minutes down on leader Sylvain Chavanel, with 16 stages remaining.

For some background, Lang has done two grand tour doubles, including finishing the Giro and the Tour last year. He finished the Tour and the Vuelta in 2008, which also counts as the German's only prior Vuelta appearance.