Damn It All To Hell: The Matti Breschel Story

Share All sharing options for: Damn It All To Hell: The Matti Breschel Story 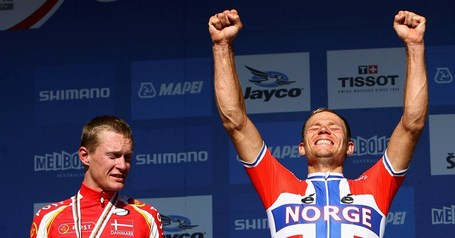 Many of you probably caught the bit from the live threads that Rabobank's Matti Breschel crashed today at the Vuelta a Espana and broke a couple fingers, ending his hopes of a world title or any other remaining goal from this lost year. Breschel appears to have sold his soul to win the 2010 Dwars Door Vlaanderen, because ever since that utterly decisive victory it's been one karmic beating after another. Four days later he flatted in the finale of Gent-Wevelgem, releasing his six leading breakaway companions from the grip of utter terror that his presence had placed on them. Next, it was a series of maddening bike issues in the Tour of Flanders, which he wasn't going to win anyway given the form his teammate Fabian Cancellara was on, but still. Later that summer he announced his transfer from home-country Saxo Bank to Rabobank, the Dutch talent factory desperate for classics leadership. I'm sure he had good reasons for this move, particularly since Cancellara had not yet announced his departure for Layopard. But things only got worse.

Sporting the national team kit and leading the Danish squad at the World Championships in Geelong, Breschel was hammering home to a rainbow jersey when he was just overtaken on the line by Thor Hushovd's later, better-timed charge. This was Breschel's second medal and third consecutive top-ten finish, but if there's ever a race where second feels like first loser, the worlds is it. He scored a few more points before ending his Saxo career, then turned to his new squad. Almost immediately his knee began acting up, and when Breschel tried to fight through the pain in winter, it didn't work. He quit the Volta ao Algarve and went under the knife, sidelining him through late May.

Not much has happened since his return -- some decent placings here and there, but no wins. Still, the autumn campaign is a target-rich environment for a guy whose powerful style gets him over hills and through the sprints. And the Worlds are in Copenhagen, an easy ride from his hometown of Ballerup. A good Vuelta -- and he was looking good -- would usher him right back to the front of the international field... but a trip over the bars has ended all that. If this doesn't kill the spirit of the high-strung Breschel, well, I guess it'll make him stronger.