Surer than doping scandals, surer than Cav getting points docked for "irregular sprinting" and surer than broken collar bones, he's there every year - the Tour de France Devil. He's become such an iconic symbol of the Tour than there are people with no interest in the sport who watch it merely to catch the occasional glimpse of him and Devil sightings are an integral part of the Tour de France drinking game.* But who is this Dark Prince of Sandals and Beards, also known as Tourteufel and El Diablo? He is 59-year-old Didier "Didi" Senft and, when not haunting the roadsides of the Tour and Giro d'Italia, he lives in Storkow, Germany, where his time is spent inventing record-breaking bikes and guitars and being a professional eccentric.

Didi has been into cycling for many decades, having been an amateur club cyclist in East Germany who dreamed of being selected to the national team but never made it. Becoming a professional sportsman was one of the few ways of getting out of the GDR to see the rest of the world in those days, so shortly after the Wall fell he started travelling around Europe to experience racing. However, Didi is not the sort of personality who would ever be content with remaining just another face in the crowd and after visiting the Tour for the first time in 1992 decided he'd do something to help liven up the long stretches when spectators are waiting for the peloton to arrive. He says that the devil persona came about due to East German commentators: "They always called the final kilometre of a criterium the Red Devil's Lap. I never saw a red devil, so I became one," he explains. So that was that sorted. Now he purchased a miniscule camper van and, after customising it in his own unique fashion, he set off for the Tour.

A large, bearded German dressed in skin-tight leggings, cloak and with horns on his head was always going to be noticed fairly quickly, but Didi is one of the world's natural entertainers - he ran up the road after the riders while waving his pitchfork and clowned around, delighting the crowds. Unlike some of the other "characters" who appear along the roads during the Tour, the Devil never has any controversial message that he felt he needed to get across and so took great care not to endanger anyone or do anything that might disrupt the race - which meant that very soon he even had a few fans among the riders themselves, who have traditionally taken a rather dim view of any spectator who feels the need to get in the road with them.

Didi takes the role, which has become a strange sort of career, very seriously: he's out and about on the Tour route before some riders are even training, scouting out the perfect places to install himself and the enormous bikes he tows around with him. He says that he would like to appear within the final kilometre - the Red Devil's Lap - but is not able to do so for safety reasons: this is usually the most crowded part of the race and his giant bike would be a danger to spectators. Once there he parks up and begins painting the road, a custom far older than the Devil but one that he has made very much his own, taking some 50 litres of white emulsion to every Tour. If you see pitchforks, giant wheels and pictures of bikes painted on the tarmac, you can be certain that he's lurking somewhere nearby. Unlike many road painters, he never includes the names of riders in his designs - he's most certainly not the sort to cast aspersions, as are those who leave messages suggesting that a rider they dislike is doping, and aims to entertain while supporting the sport he loves as a whole rather than individual competitors. What we don't get to see on television is that Didi has become an important part of the Caravan, the cavalcade of trucks and promotional floats that travels around with the Tour and drives each stage a few hours before the race, distributing free gifts such as pens, posters, t-shirts, bidons and baseball caps. He leaps on and off the vehicles, chasing the gift-throwing girls who pretend to be afraid and run away, but not so fast that he can't catch them - at which point, he gets covered in lipstick. It goes without saying that the companies involved in the Caravan love it, because he attracts attention and provides more publicity than the vehicles alone ever could.

Of course, not everyone has such a well-developed sense of humour as Didi's and there are those who don't like him - some of the riders cross to the other side of the road to avoid him. However, being the rather nice sort of devil that he is, he doesn't chase those ones and lets them get on with the race. The majority of the riders welcome him though - Andy Schleck, known as one of the nicest people in the sport, even awarded him a medal for his services to cycling. One group of people famous for their total lack of a sense of humour is the Swiss Police who during the 2006 Tour de Suisse fined him, threatened him with prison and made him remove a pitchfork he'd painted on the road. If you've ever been fortunate enough to follow the Tour, you'll know that although it's unique among the world's largest sports events in that it can be watched for free, doing so nevertheless becomes very expensive - there's the cost of more than 3000km's-worth of fuel and the food you'll need along the way for a start. Fortunately for the Devil, his celebrity has grown so much that he now receives small payments from various companies that sponsor him including the car transmission manufacturer LUK, whose corporate logo can be seen on his costume and campervan. Other fans at the races donate money to him, as do those who visit his museum at Storkow and although he still gets around in a camper far smaller than the enormous ones you see parked throughout the Alpine stages (some of them looking more like trains),  he's moved up in the world - it's npw a shiny, sponsored Volkswagen with a picture of himself on the side.

When not doing his bit to keep the crowds happy, Didi can sometimes be found in person at his museum which is home to more than 120 of the bikes and other things he has designed and built, some of them earning him official world records. Among them are the world's smallest tridem (a bike for three people), the world's biggest bicycle, the world's tallest bicycle, the world's longest two-wheeled scooter (18.28m), the world's longest bike (38m with 76 rear wheels), the world's longest pedal car and the world's largest movable, playable guitar. He has also built a 12.4m rickshaw which seats the passenger more than 6m off the ground and a remarkable tricycle that he rode at soccer's European Cup championships with wheels made of 88 footballs. This year, he built a bizarre rickshaw to commemorate Prince William and Kate Middleton's wedding, with a bike's front wheel, the back end of a Trabant and a cardboard cut-out of the happy couple and a baby seated within. 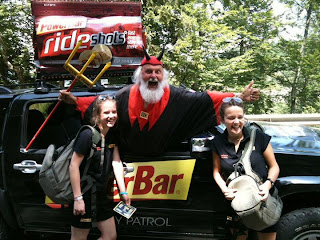 So all in all, we can't really explain what's with the Tour Devil because he's far too mad for us to understand; but one thing's for sure - cycling would be far poorer without him. Long may his reign continue!

*The rules vary between players - and frequently several times during each game - but the basics of the game are that a mouthful of drink must be swallowed upon seeing a chateau, horse or cow; two upon seeing any other animal or upon hearing a commentator say "the elastic has snapped" and three whenever Jens Voigt is on screen (no idea why). A drink must be downed in one upon seeing human genitalia painted on the road or upon a Devil sighting. Among the hardcore, it is forbidden to take a nature break unless a member of the peloton also does so.