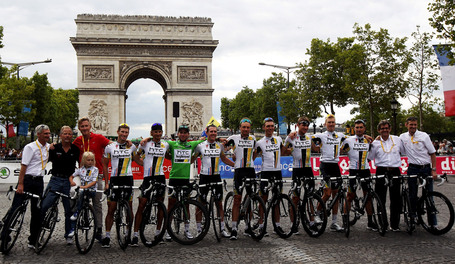 In a press release issued today, Bob Stapleton confirmed that he has told HTC-Highroad riders to look elsewhere for next season, because the top-ranked team in cycling has failed to secure a new title sponsor.

"After an exhaustive search to secure long-term spponsorship, we have concluded that its time to release our team members to pursue other options," said Stapleton in the press release.

The decision means that the team's riders must find new contracts in an ever-shrinking market. It also puts around 80 staff members out of work. Since the team began in 2008, it has celebrated 484 race wins, and will likely achieve its 500th win before the end of the 2011 season.

In a conference call, Stapleton told journalists, including Joe Lindsey at Bicycling, that the doping scandals of the past decade had influenced sponsorship conversations. The Highroad owner also said that the rise of big-budget "super-teams" funded by wealthy individuals had made it more difficult to compete.

"We produced heavyweight results with a middleweight budget. You can do that against teams with a 50 percent bigger budget, but once it reaches 100 percent or more, that’s increasingly difficult," Stapleton said. The Californian ruled out reviving the team in 2013.

On the women's side, the team may continue one more season. Stapleton said he had a "concrete alternative" for funding the team. The budget for the women's team is much smaller, and the women sign their contracts later in the year than the men do. This dynamic offers Stapleton more time to put together a funding package for the women.

Next season is an Olympic year, which makes it doubly important for the top women to have team support. Evelyn Stevens, Amber Neben, Judith Arndt, Ina-Yoko Teutenberg: Highroad supports some of the top women of the sport, all of whom have Olympic hopes.