Sometimes Its the Little Things That Mean the Most.

Share All sharing options for: Sometimes Its the Little Things That Mean the Most.

It seemed as though it was only yesterday I was driving back with the For Viored Brookvex girls from the Czech Republic when sure enough I was back on the road again – destination the Tour Feminin en Limousin in France.

I had just come off a good ride at Dwars de Westhoek, a UCI 1.2 here in Belgium a couple of days prior where I managed to finish the race in the less than ideal conditions… The race was 120km, included in which was a 10km circuit with 400m of cobbles which we had to jiggle over each lap – and I say jiggle, because there is NOTHING flattering about riding over cobbles!! :-/ I was sitting comfortably in the peloton before about midway into the race when the wind picked up and race turned quickly into a competition to see who could sit as close to the gutter and wheel in front whilst chewing as much stem as possible… Long story short, a lapse in concentration saw me fail at the former at the pointy end of the race and I finished in a group behind the peloton in 34th place – not a great result but it was a UCI 1.2 race, I finished, and considering that last year I crashed 20km in and broke my ribs, I think that is an achievement in itself. I was feeling good (after a couple of days recovery to regain movement in my arms – who needs a shake-weight when you have cobbles!!) and excited about racing Limousin!

Getting my hurt on at Dwars de Westhoek

Stories, pictures, cartoons and more! On the flip..

The road trip was ‘only’ 8hrs and given that the team was already over from the UK after competing in Dwars de Westhoek, we took advantage of the few days in between racing to make a head start on the road trip and get an extra day recovery in before the start of the Tour. We arrived at our home for the night in Gueret (central France) in dark, cold and rainy conditions. I can’t remember what triggered it, maybe it was a combination of the tiredness and restlessness from the road trip, the miserable weather or standing face to face with what I was expected to be sleeping in that night – but all of a sudden I was feeling a long way from home… Scrambling for the iphone, I was nervously awaiting signal from what was one of my main sources of sanity on tour – wireless internet. I sat outside on the steps of the motel in the rain for the next 10min getting my fix, my reminder of loved ones and friends back home and just cried. Being out of your comfort zone in unfamiliar territory makes you appreciate the somewhat ‘simplicity’ of life back home… I carry around with me a couple of reminders of home everywhere I go – a constant in a lifestyle which, for most amateurs at least, is sporadic and unsettled. I am not alone with my little qwerk, beyond the composed exterior of most professionals lies a regular human being who is just as vulnerable as you or I, and it is sometimes the small things such as this that keep riders going on Tour because every day they are faced with the same tiredness, food, pain and suffering and these mementos from home or Skype chats to the family are the only thing that you have of your own. Sometimes these little things are the only things that keep you sane and focussed on the task at hand.

Allan Piper shows a classic example of this in his autobiography when speaking of his relationship on Tour with Robbie McEwen – for Robbie ‘Crunch Muesli’ for breakfast was his Tour necessity and was one of his only requests on Tour, but Allan knew that ‘it was something [about the muesli] way beyond tasting better than other breakfast cereals, at least for Robbie it was.’ Being on Tour is about dealing with the insane tiredness and the emotional roller-coaster that is bike racing.

Bradley Wiggins is another professional who touches briefly on life on Tour in his autobiography ‘On Tour’ – he says ‘It’s about suffering and somehow getting the job done when probably the more logical and sensible option is to sit up, get off and book the first flight home to your loved ones’. He also advises riders try their best to flatten out the highs and lows experienced on Tour as a means of survival whilst highlighting the importance of simply being able to ‘just keep your head down and try to ride to your limit as often as possible.’

I feel that whilst I may highlight the less appealing aspects of being on Tour, I should remind you that I do actually love doing what I do. My blog was initially a reminder to myself of all my invaluable experiences I’ve had on the bike, but also to provide onlookers a glimpse into the reality of the world of cycling and whilst it may appear all rhythm and routine, organised and for the men at least, glamorous, if you scratch the hard perceived exterior of most professional cyclists you will find a person just like yourself equipped with their own unique strategies for undertaking these extraordinary feats out on the road.

Fix successfully gotten and it was time to wipe away the tears, get out of the cold and get changed for dinner. I was feeling good and determined to have a successful tour and knew that sacrifices made would all be worthwhile in the long run :) The next day we were able to do a recon of the first stage of the Tour which started the following day – an 18km rather boring circuit to be completed 6 times with a couple of short climbs in it. Recon successfully completed and it was time to head to our race accommodation and home for the next 4 days – another boarding house somewhere in between ‘somewhere’ and ‘nowhere’ in the region of Limousin :) then down to the school canteen for a surprisingly nice dinner and too much baguette bread and off bed!

The team freezing our butts off at team presentation

The morning of stage one and it was bucketing down, as it had been for the past 24hrs. What a great start to the Tour! Wet weather gear on and it was time to race. The race was rather uneventful to be honest with my goal to use the stage as a tester to hopefully predict good things for the next few days. A couple of attacks went, were brought back and I was happy to be up there for the first few but it came down to the classic ‘miss the break that sticks’ and a small group about 10 rode off the front midway into the race and stayed there leaving me to finish in the peloton behind about 1min down. My legs ended up feeling like poo during the stage so I was happy to make it through with the group!! Without a soigny for the Tour, I knew I had to pull out all devices to try and get the pins pumped for the next few days!

Time Trial day. For those who know me, I am not renowned for my ability in the fight against the clock however secretly despite my lack of natural talent in this area, I actually really enjoy them!!!! I’m not sure if it is because there are fewer variables or because your performance is generally dictated by how hard you push yourself but for some sick reason, I like a bit of hurt! I didn’t have any aero gear except for an aero helmet which made me look like something out of Predator, and so expectations were low on me for this stage… I still put in a solid effort and was happy to finish midway down the classy field! The team then decided to hang around in a local pub after the stage to watch Cadel battle out the last 40km of the Galiber stage and between you and me, it was probably the highlight of the day ;) 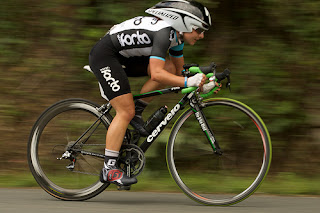 Started off well. It was 126km undulating course with a couple of nasty KOMs thrown in for good measure. I was up there in the front group and rode out of my skin to get over the major KOM midway through the race with the lead split when a couple of kms later after successfully doing so, I cramped like I was being shot in my calves and glutes with a tazer. I haven’t cramped like this before and definitely have no desire to do it again. I’m not sure it was a combination of dehydration in the heat or simply my punishment for pushing my body harder than it appreciated but long story short – every time I turned the pedals with any force I cramped and it wasn’t long until the convoy past me, as did the bunches behind and I was creeping at around 20kph..On the flat. With 30km to go and the ambulance behind us DNFed – no excuses, I just couldn’t bear with it any longer.

Stage 3 started off so well...

That was it – Tour over. Just like that. Unclipping from the bike all I could do was sit on the ground outside the van in the rain trying to patch up the puncture in my will to live. Lesson learnt, no matter how boxed you are, make sure you eat and drink and hopefully this Tour served as an increase in intensity my body needed to get me to that next level in fitness… no doubt will see when I race today!

The last day of the Tour was spent at the pub and exploring the patisseries in the host town before commencing the epic journey back to Belgium. I arrived back home at 2am after another eventful trip and one of the first things I did was unpack my suitcase. I didn’t care what time it was but all I knew was that Belgium was home for the next month and all my stuff was going to be unpacked and have its own place in my room – just where I wanted it. Because sometimes, it’s the little things that keep you going :)

My next race is a 90km kermesse this afternoon in Brambugge – the same area which is playing host to a UCI 1.2 next weekend which I will be guest riding for! It will be good to see how the body has recovered from France and see what the area is like before the biggie the weekend after! Anyway, enough of my blabbering – some people say I talk to much… and I think I’m starting to believe them :p